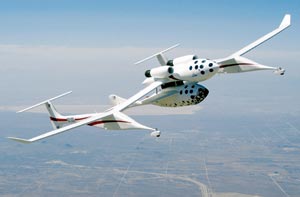 The smart money is on Burt Rutan and his aerospace company, Scaled Composites, to win the Ansari X Prize. The $10 million reward will go to the first privately funded team that successfully launches the same piloted, three-seat craft into suborbital space twice within 14 days. In April, the FAA awarded Rutan’s Mojave, Calif., company the first-ever certificate for a suborbital plane.

Technically speaking, Rutan’s entry in the X Prize stakes consists of two vehicles. A large turbojet-powered craft, White Knight, carries the newly certified plane, SpaceShipOne, into the sky, and when White Knight reaches the proper altitude of 50,000 feet, it releases SpaceShipOne, which then attempts to soar to the edge of space. During its first powered flight, which took place last year on the 100th anniversary of the Wright brothers’ first flight, SpaceShipOne reached a supersonic speed of Mach 1.2.

During a May 13 test flight, the plane reached an altitude of 40 miles, or about 22 miles short of the height X Prize officials require the winner to achieve. Rutan has a few more months to meet the goal; the prize will expire in January 2005.