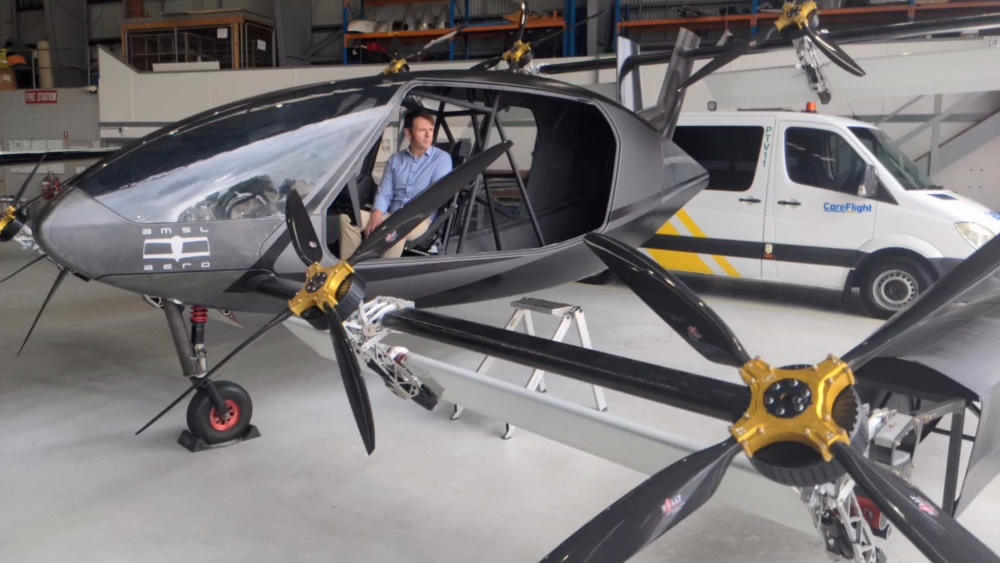 What’s the most efficient eVTOL? It’s Vertiia, at least according to AMSL Aero, the Australian company building the aircraft. And since AMSL recently rolled out its first full-size prototype, the world will soon find out if the impressive projected specs play out in real-world performance. “Being the most efficient eVTOL in the world, it creates a tremendous opportunity to provide zero-emissions, air-transport solutions,” AMSL founder and CEO Andrew Moore told Robb Report.

Vertiia’s design includes eight propellers spread across two mounting bars that pivot to adjust the direction of thrust. Engineers from the University of Sydney partnered with AMSL, using computer modeling to streamline the structure of the four-seat body and optimize the propellers. The company says the the aircraft will cruise at 186 mph with a range of roughly 155 miles using a bank of high-density batteries. AMSL and U. of Sydney are also developing a hydrogen fuel-cell version that they expect will refuel faster and extend the range to 500 miles.

“Vertiia’s use of hydrogen will put us at the forefront of de-carbonized transport development globally,” Moore said at an event introducing the prototype. “It will also provide air transport that is resistant to global oil price fluctuations and interruptions.”

While the early models will be piloted, AMSL is also working with Mission Systems, an Aussie logistics company, to install remote- and autonomous-flight technology that can take over when circumstances and regulations allow.

The first step, though, will be getting the aircraft certified, a process that can start in earnest now that there’s a prototype. AMSL believes they can have Vertiia in commercial use in 2023.

CareFlight, another partner in the project, will be its first customer, providing medical access to remote communities in Australia. The initial models will be air ambulances, with space to carry a pilot, technician and stretcher. Passenger models will follow.

The eVTOL maker has partnered with CareFlight, which provides long-distance medical care to isolated communities. The air ambulance version will have space for a pilot, technician and stretcher.  Courtesy AMSL Aero

“Unlike aeromedical planes that require a runway, Vertiia will carry patients directly from any location straight to the hospital, significantly reducing the complexity and time transporting vulnerable patients,” Moore said. “It will also be quieter and safer than helicopters, and will eventually cost as little as a car to maintain and run, transforming aeromedical transport into a far more affordable, accessible, safer, and reliable option.”