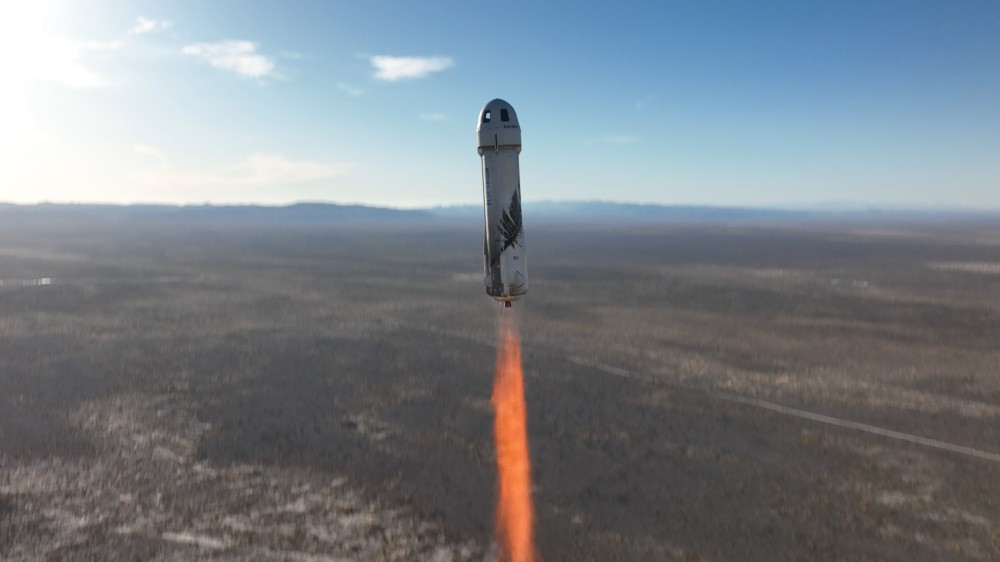 NS-21’s members include Mexican-born Katya Echazarreta, a YouTube personality who has worked for NASA’s Jet Propulsion Laboratory; 28-year-old Victor Correa Hespanha, a civil production engineer from Brazil who secured the seat by purchasing a space NFT; and Jaison Robinson, founder of JJM Investments, and former player on the US National Water Polo Team and finalist on “Survivor: Palau.” Pilot Hamish Harding, also on the crew, set the global circumnavigation record in a Gulfstream business jet.

This crew also has financial heavyweights Evan Dick, managing member of Dick Holdings, and Victor Vescovo, founder of Insight Equity. Dick, an ATP-rated pilot, flew on Blue Origin’s NS-19 on December 11, 2021, and Vescovo, who has flown fighter jets, has explored the deepest parts of the world’s oceans in his research vessel DSV Limiting Factor. Last year, Vescovo brought Harding on one of his undersea trips into the Challenger Deep. The NS-21 mission will make them the first duo to go into space after the deep dive.

Seeing the Earth and its curves will be the highlight for the crew.  Courtesy AP

“The thing I’m most excited about is seeing the view,” said Vescovo. “I’ve been to the top of Everest and kind of saw the curvature of the Earth, but it’s nothing like I expect to see on this mission.”

Vescovo told Robb Report earlier that after his deep-sea exploration days wind down aboard Limiting Factor and his Triton submarine, Pressure Drop, he plans to move to space. This will be his first venture, albeit a brief 13-minute one, to the Kármán Line. At an altitude of 100 kilometers, it’s generally viewed as the dividing line between the Earth’s atmosphere and space.

Because of confidentiality agreements, Vescovo can’t reveal many details of the flight, but said one included having to “watch his weight,” and keep below 185 lbs. because the New Shepard rocket is “payload dependent.”

“We’ll do some training at Blue Origin’s facility in Van Horn, Texas,” said Vescovo, “It will be about familiarizing ourselves with the safety systems of the capsule if something goes wrong.” The submariner said his multiple voyages on Pressure Drop were good preparation for the tight confines of the space capsule.

“I’ve already received training to experience Zero-G [gravity] on parabolic flights,” said Vescovo. “And I’ve been to places that are extremely hostile to human life, so this won’t be totally new to me.”

Vescovo compares his voyages to the deepest parts of the ocean and the edge of space as yin and yang. “They’re two sides of the same coin,” he says. “The deep-diving is highly technical, slow and very peaceful, where the rocket flight will be, from what I’m told, a very violent and fast sensation. One is no less than the other.”

The Texas-based adventurer also addressed the financial inequity of the first space-tourism flights. “I understand the viewpoint that only people like myself are going into space,” he says. “But these are very early days like the first years of aviation. The launchers like Blue Origin, Virgin Galactic and SpaceX will get better and better at this and this funding now will help move the experience curve so it’s more affordable. I’m trying to contribute to the early adoption phase.”

Vescovo, like the other crew of NS-21, will also be living out their childhood dreams of going into space, even if it’s just for ten minutes. Blue Origin said it would provide updates on the new launch date once available.