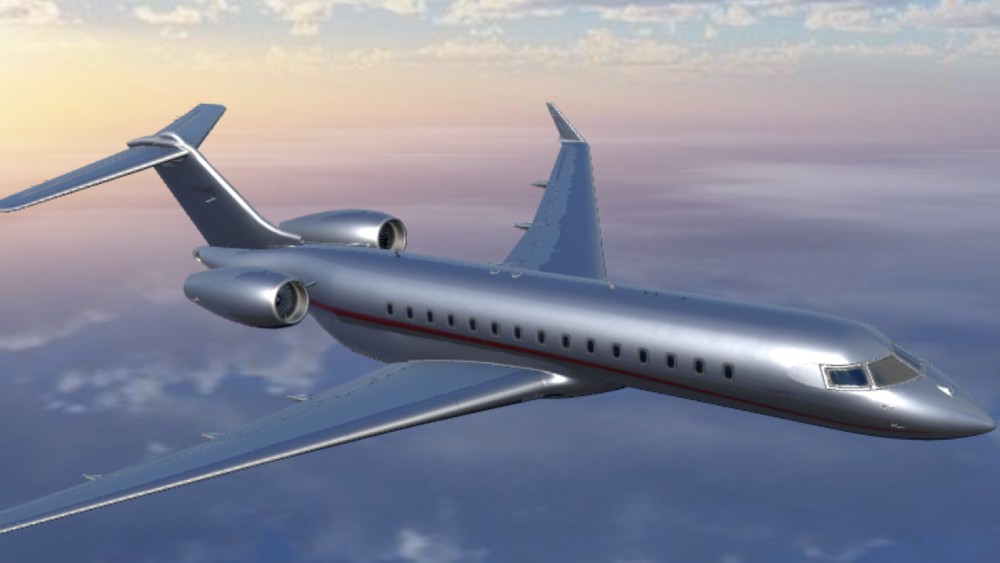 If you’ve ever wondered what happens during the handover of the world’s largest business jet, with a starting price of $73 million, the answer came through loud and clear inside a massive hangar in a Montreal suburb.

Bombardier launched its 100th Global 7500 yesterday at its Dorval, Quebec, headquarters at a ceremony that was equal parts Ted Talk, Oscar night and bromance. The occasion was the most recent delivery of the world’s largest ultra-long-range business jet—boasting a range of 7,700 nautical miles—to VistaJet, Bombardier’s biggest customer.

The real celebrity was the silver VistaJet, with its trademark red stripe down the side, sitting beside the stage in the huge hangar. About 500 Bombardier employees, many of whom worked on the jet, were also at the event.

Flohr and Martel (center) celebrate in front of the new aircraft, with VistaJet staff nearby.  Courtesy Michael Verdon

Thomas Flohr, founder and chairman of VistaJet, was joined by Bombardier CEO Erik Martel, who officially presented the “keys” to the new jet to Flohr. It is the tenth Global 7500 in the VistaJet fleet. Flohr was clearly emotional with the presentation of the new jet, which has the most recent VistaJet interior design.

Flohr told Robb Report in a post-event interview aboard the new Global 7500 that the day had been “overwhelming.” Part of the ceremony included a video of Flohr’s 18-year journey since founding VistaJet. He started the company by chartering a Learjet 60 to other business travelers and then built his fleet from there. Now, VistaJet, with a global presence, is one of the largest private aircraft owners in business aviation.

Flohr and Martel, both wearing black turtlenecks, had known each other for 15 years, so there was clearly a bit of a bromance taking place on stage as they described their mutual respect for each other. “Thomas, you challenged us and made us better as an OEM and operator,” said Martel.

“You guys are light years ahead of the competition,” Flohr replied. He also described how Martel, a former Bombardier executive who returned as CEO in late 2019, had made his first business trip outside Canada to Flohr’s London apartment during the height of Covid. A day later, they signed a contract for the purchase of six Challenger 350s.

The four-zone aircraft has a full bedroom at the rear.  Courtesy VistaJet

Of course, the true showstopper of the night was the new Global 7500, which Flohr flew back to Europe following the event. The aircraft has four zones in the cabin, with multiple seats that can be adapted to dining and sleeping configurations. At the rear is a bedroom with its own ensuite and shower.

VistaJet’s “asset light” business model was developed by Flohr so that its members don’t have to own the aircraft, but can step aboard with guaranteed availability. Its fleet all have the same interior and exterior designs so that members feel like they’re on the same aircraft every time they fly.

The most recent interior update, reflected in the new Global 7500, includes more muted silver and grey tones, with flecks of bright colors—inspired by a recent trip that Flohr’s daughter took to Peru.

By the end of the event—which included a performance by singer Gabriella Laberge and a video of the milestones in VistaJet’s history—Flohr was ready to board his jet and take off for VistaJet’s headquarters in Malta.

“We’re just at the beginning,” Flohr told Robb Report. “Business aviation used to be North-American centric, but we see opportunities all over the world.”