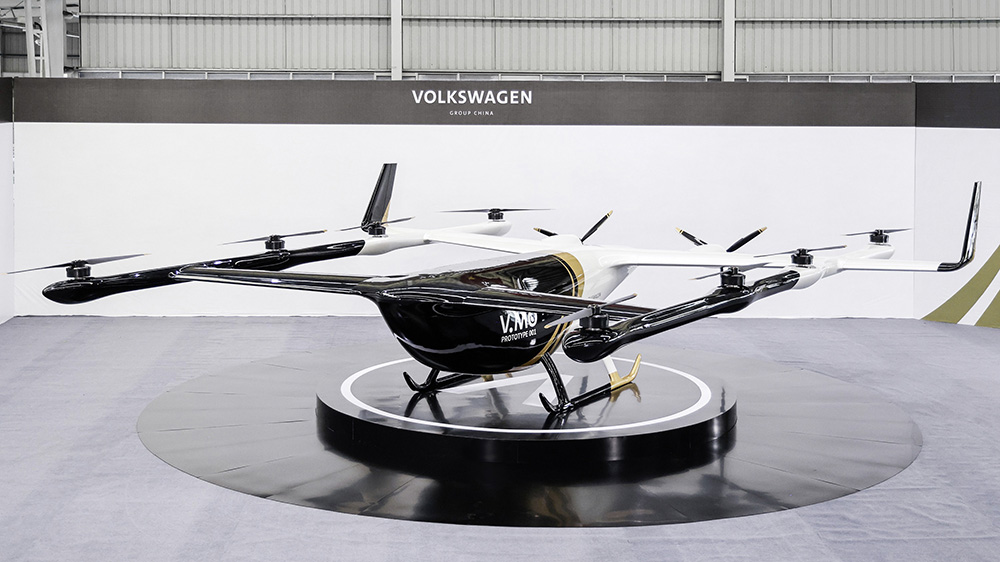 VW China unveiled a new eVTOL (electric vertical take-off and landing) last week with some quite impressive performance specs. The Vertical Mobility project, or V.MO. for short, is a fully autonomous electric aircraft that could eventually carry four passengers and their luggage up to 120 miles (200 km) without a pilot, according to VW.

The first prototype, which was created in partnership with UK design firm Tangerine and Chinese aviation manufacturer Sunward, has been nicknamed Flying Tiger due to its distinctive black-and-gold livery. Fittingly, it was also launched in the Year of the Tiger.

Flying Tiger is around 37 feet long by 35 feet wide. It sports eight rotors for vertical lift and two rear propellers for horizontal flight. VW says the premium craft will initially be aimed at wealthy Chinese clients and used to shuttle VIPs between the oft congested mega-cities.

To appeal to the well heeled, VW formed a team of young, local experts to design the craft. The team carried out intensive research and talked to more than a hundred high-net-worth individuals across China to determine their needs.

“Through this pilot project, we are bringing Volkswagen’s long tradition of precision engineering, design and innovation to the next level, by developing a premium product that will serve the vertical mobility needs of our future tech-savvy Chinese customers,” Dr. Stephan Wöllenstein, CEO of Volkswagen Group China, said in a statement. “The launch of this stunning validation model—the V.MO—is the first of many remarkable milestones on our exciting journey towards urban air travel.”

Of course, VW isn’t the only automaker moving into aviation. Rolls-Royce and Hyundai recently announced plans to work on new air mobility projects. Honda has also thrown its hat into the eVTOL ring.

Volkswagen will conduct several flight tests with Flying Tiger later this year, before an improved prototype (Hidden Dragon?) will carry out advanced test flights in the summer of 2023. Keep your eyes on the skies, folks.