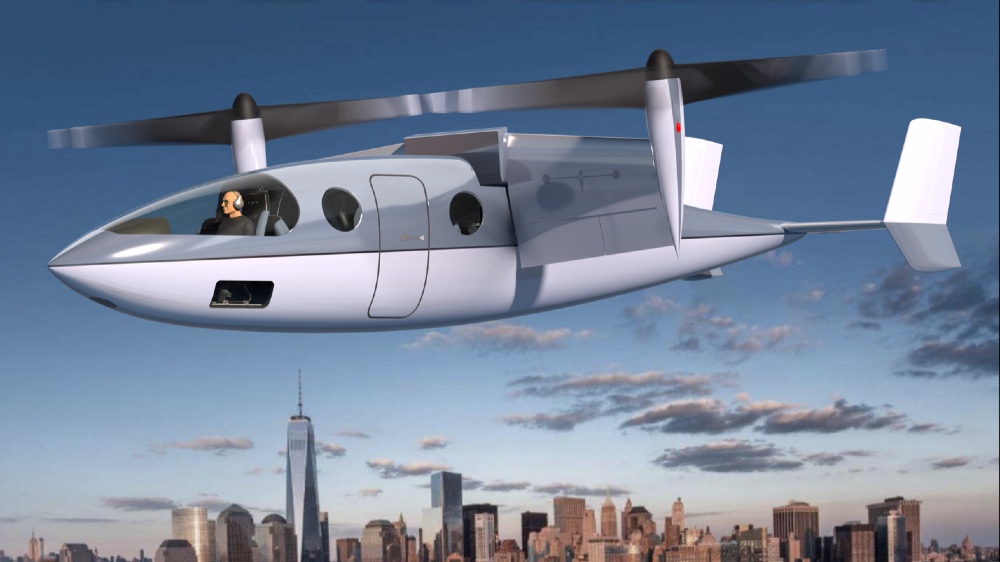 How do you make a helicopter three times faster? Create an entirely new type of aircraft.

Transcend Air believes it has found a better solution for executive, inter-city commuting with its VY 400, a vertical takeoff and landing (VTOL) craft that the company predicts will be three times faster and half as expensive as a similar-sized twin-engine executive helicopter. Transcend says its new disruptive design will also be faster than any fixed-wing turbo airplane of the same size.

VTOL aircraft, especially the fast-growing list of hybrid and electric experimental versions, have received much media coverage lately, as the concept of short-range, electric-powered air taxis and urban air mobility (UAM) networks move closer to reality. Uber Air and Joby have said they will be ready to run their air-taxi services by 2023.

The Vy 400R has a large bespoke cabin with seating for four.  Transcend Air

“Transcend is different from other manufacturers in that it’s taking a regional approach to air mobility rather than the local strategies most others are employing,” Mike Hirschberg, executive director of The Vertical Flight Society, a non-profit supporting VTOL development, told Robb Report. “The Vy 400 is being optimized for longer-range, higher-speed missions, and that separates it from nearly everyone else.”

The Vy 400 will also use proven P&WC PT6 aircraft engines, rather than experimental electric powerplants. Another key differentiator is its range of 450 miles, compared to air taxis, which move short distances inside of cities. The Vy 400R carries four passengers in a large cabin, flying at 400 mph between cities like New York and Boston, a trip that takes just 36 minutes.

Transcend founder Gregory Bruell is an old hand in the VTOL segment, having designed and built 15 working VTOL prototypes over the last 11 years. Three years ago, Bruell and a group of aviation executives realized they could disrupt the executive helicopter segment. They decided to create the Vy 400 as the backbone of a new business model.

Avoiding airports, the Vy 400R can be left at the owner’s home and then flown to the office in the city.  Transcend Air

“The great thing about this aircraft is that, unlike electric aircraft, our engine and components already meet all existing regulations,” Peter Schmidt, Transcend’s chief operating officer, tells Robb Report. “We also believe its speed of 400 mph—three times faster than a medium twin helicopter—and much lower operating costs will help it dominate the market. The Vy 400 will also have a larger cabin than almost all executive helicopters that it’s competing with.”

The Vy 400R (R standing for Reserved edition), the company’s executive version, will be priced at $6 million, with the owner choosing the bespoke interior created by the Huslig Collective. Schmidt sees a potentially robust business for the Vy 400R, since it will allow owners to fly from a helipad at their homes to landing sites in the heart of urban areas. The first 40 slots are reserved for individual buyers.

The lion’s share of the Transcend business, however, will be commuter airline services flying between metro areas, avoiding airports by doing vertical landings on special barges in the harbors, a few hundred yards from downtown metro areas.

The company sees 42 potential pairs of cities for the scheduled commuter flights. The airline version, priced at $3.5 million, will have a standard cabin configuration as opposed to the bespoke version on the R model.

Schmidt says the Vy 400’s vertical liftoff and its quick switch into a lateral airplane mode will be an entirely different experience than a helicopter flight. “We see the Vy 400 as a fast elevator compared to the helicopter, which is more like a slow escalator,” he says.

At the moment, the Vy 400R is a concept that has been proven by small-scale prototypes. Transcend is ready to close its next round of funding, according to Schmidt, which will give it the money to build the first full-sized, manned prototype. He says the company  start delivering the first executive versions of the Vy 400R in 2025.