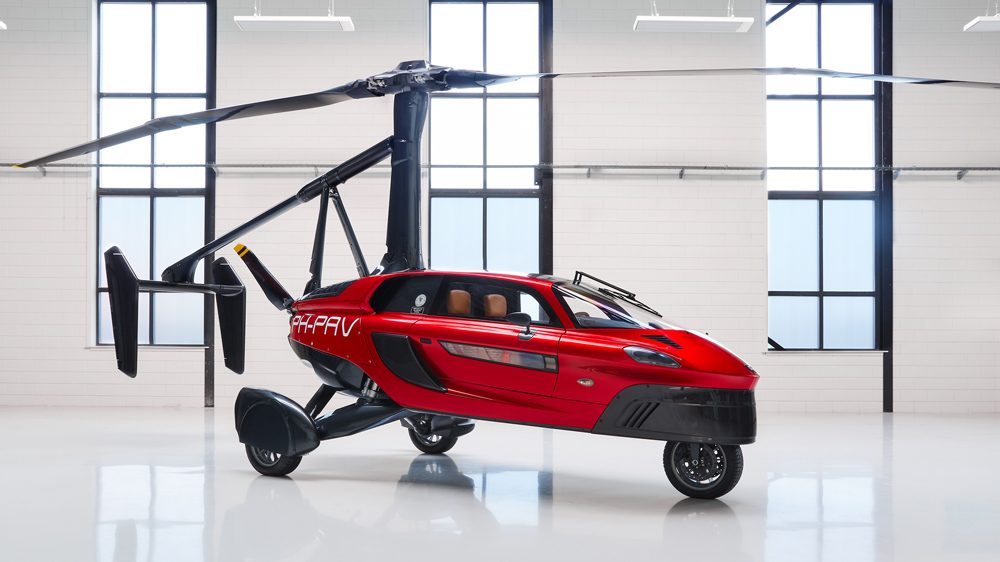 While we devote much ink (both actual and virtual) in our aviation coverage to first-class cabins, business jets, and charter services, planes are by no means the only ways to experience the thrill of flight. In fact, people were enjoying soaring through the air even before the invention of the airplane in a contraption that will actually make an appearance later on this list. The point is, there are plenty of fun ways to get an elevated perspective on things, from functional jetpacks to autogyros.

The Hoversurf Hoverbike is technically a vertical takeoff and landing (VTOL) vehicle. However, while most of the full-size VTOLs that hope to come to market will have to contend with strict FAA regulations (many of which still have to be debated and implemented), the Hoverbike was able to receive classification as an ultralight aircraft, which means that riders don’t need to get a pilot’s license or certification (though Hoversurf requires that the owner takes a mandatory training course).

The fully-electric aircraft is ridden like a motorcycle, with four propellers at each corner to provide lift and thrust. Its carbon fiber body saves weight, which means Hoversurf was able to install larger batteries that can keep the personal drone aloft for 10 to 25 minutes (depending on rider weight and other factors). When pressed to its limit, the Hoverbike can fly up to a restricted 60 mph.

The company is taking orders now for the $150,000 machine, which will be delivered in two to six months. The mandatory training package costs another $10,000.

The oldest form of air transportation on this list, unmoored ballooning has been around for more than 200 years (fun fact: The world’s first balloon passengers were a sheep, a duck, and a rooster). Although many people think of ballooning as fodder for cheesy romantic dates or remember it for its Mandela Effect–like non-role in Jules Verne’s Around the World in 80 Days, there are still enthusiasts out there who turn what is a once-in-a-lifetime experience for most people into a serious hobby. And why not? While most of the vehicles on this list are meant to stir up your adrenaline, ballooning is about relaxation and killer views.

One exciting new development in the field is the two-person FlyDoo, which could become the first hot-air balloon in the light sport category if the FAA approves the design. This development would make ballooning much more accessible to those with a casual interest. A complete FlyDoo is priced at around $21,000, but for an extra $14,000, you can add a vectored thrust unit (aka a motorized propeller) to help you direct your course.

In most people’s minds, jetpacks are the stuff of science fiction and action movies. However, while no practical working model has been produced at scale, there are a few designs out there that you can actually get your hands on.

Recently, Gravity Industries put a number of their Jet Suits on sale at Selfridge’s for $373,310. The suit employs a main thruster that attaches to the pilot’s back and two thrusters on each arm to control direction (yes, just like Iron Man). You may also want to comb the back alleys of eBay to get your jetpack fix. In September, Apollo Flight Labs put one of their used jetpacks up for auction to clear out some space in their shop.

The Calidus AutoGyro has been flying in Europe since 2009  Photo: Courtesy Calidus

The technology behind autogyros is not new; It was developed nearly a century ago by Spanish engineer Juan de la Cierva with the goal of creating an aircraft that could fly safely at low speed. Classified along with helicopters as rotocraft, an autogyro is different because instead of a motor driving the rotor blades, it has a free-spinning rotor that provides lift simply by the aircraft moving forward—thrust that is usually provided by a motorized propeller at the rear.

Thankfully, autogyros are much easier to pilot than helicopters and revised FAA regulations have made it easier for models to get certified. The Calidus Autogyro, one of the most popular designs in Europe—where autogyros are a more common sight—was recently certified in the U.S. and can now be purchased for around $100,000 from its U.S. distributor, AutoGyro USA.

If you’re in no rush, you can also check out the Pal-V, an autogyro design that’s in development, with certification planned for 2020 (though this date has moved back a few times in the past). This unique vehicle is not only an autogyro; when it lands, its rotors and tail fold away, transforming it into a road-going three-wheeler. The Pal-V Liberty version is priced at $600,000, while the PAL-V Liberty Sport costs $400,000.

DJI Goggles give you an immersive view from your drone.  Photo: courtesy DJI

The consumer drone revolution has made the buzzing little aircraft the easiest way to begin a lifelong obsession with flight. But controlling a drone from the ground while watching its camera feed through your phone isn’t quite the same experience as being up in the air yourself. That’s were another revolutionary technology that’s picking up steam comes in. Many drones now support VR headsets that give pilots a completely immersive first-person view. Alternately, you could let a friend wear it while you pull off your most daring aerial maneuvers and try to make them sick.

Market leader DJI offers a pair of $350 VR goggles that work with its popular Mavic, Spark, Phantom, and Inspire series. This pair also features headtracking mode, in which the viewer can control the pitch of the camera and yaw of the drone with just their head movements, letting you take in the scene as if you were a passenger in the drone itself.