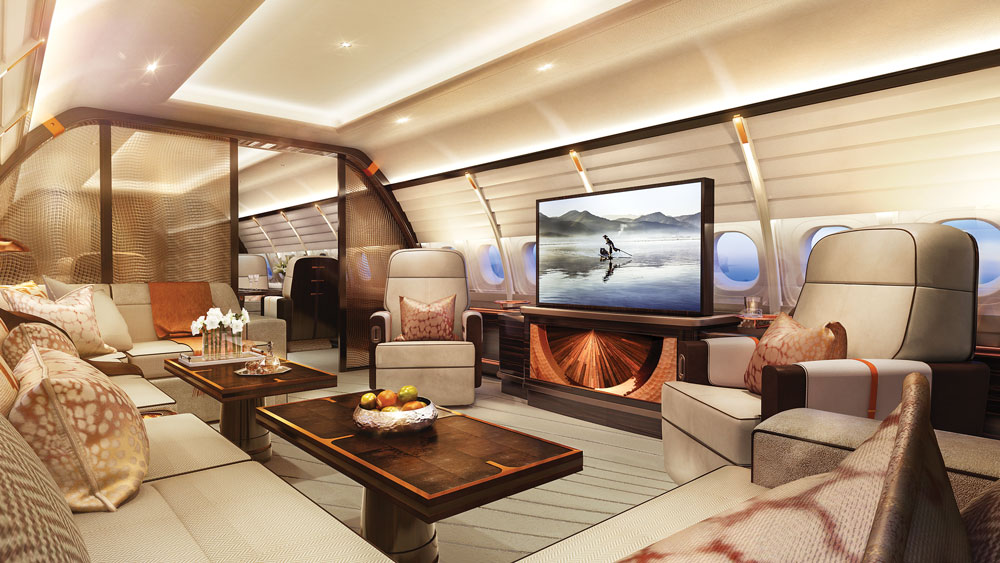 The brief that Winch Design received for the Elements aircraft was straightforward enough: The client, with whom the London-based firm had collaborated once before, wanted an interior with space for family members, adequate privacy to allow guests to interact without disturbing sleepers, a large kitchen, and ample storage. He wasn’t keen on yel-low gold but requested other pure elements for the details. Most of all, he wanted a dynamic design for his new jet—an Airbus ACJ320neo, set for delivery in 2020—which he plans to use regularly for both business and family travel.

Winch delivered a concept that incorporates copper throughout the interior, including a custom copper-mesh screen that distinguishes one area from the next in the main cabin—a move that provided style and separation without interrupting the view down the length of the aircraft. Natural wood finishes and muted tones on upholstery also contribute to the interior’s modern, streamlined aesthetic. The contemporary touches extend to bespoke lamps and accent lights that feature innovations such as ultrathin LEDs, something that wouldn’t have been possible in years past. “We’ve learned that these touches enhance an aircraft interior by breaking the commercial feel of aerospace standard fittings,” says Sam Curson, senior aviation project manager
at Winch. Further enhancing the clean, high-​design atmosphere aboard Elements is a 64-inch 4K television, installed almost like an artwork, that rests on a base composed of straw marquetry and carved solid wood brushed with real copper.