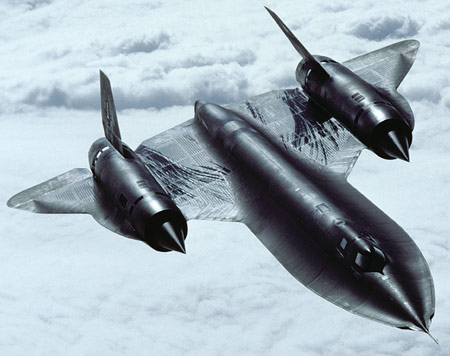 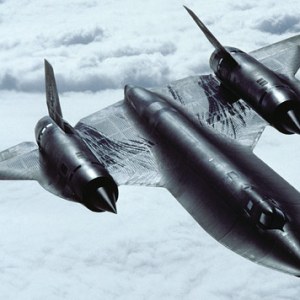 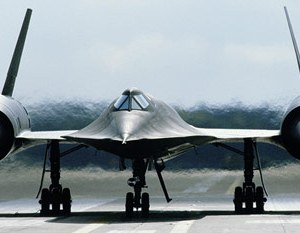 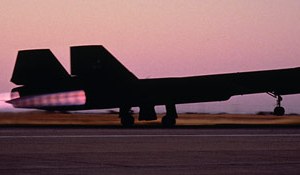 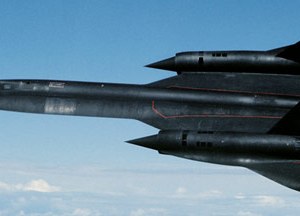 In April 1986, following an attack on American soldiers in a Berlin disco, President Reagan ordered the bombing of Muammar Qaddafi’s terrorist camps in Libya. My duty was to fly over Libya and take photos recording the damage our F-111s had inflicted. Qaddafi had established a “line of death,” a territorial marking across the Gulf of Sidra, swearing to shoot down any intruder that crossed the boundary. On the morning of April 15, I rocketed past the line at 2,125 mph.

I was piloting the SR-71 spy plane, the world’s fastest jet, accompanied by Maj. Walter Watson, the aircraft’s reconnaissance systems officer (RSO). We had crossed into Libya and were approaching our final turn over the bleak desert landscape when Walter informed me that he was receiving missile launch signals. I quickly increased our speed, calculating the time it would take for the weapons—most likely SA-2 and SA-4 surface-to-air missiles capable of Mach 5—to reach our altitude. I estimated that we could beat the rocket-powered missiles to the turn and stayed our course, betting our lives on the plane’s performance.

After several agonizingly long seconds, we made the turn and blasted toward the Mediterranean. “You might want to pull it back,” Walter suggested. It was then that I noticed I still had the throttles full forward. The plane was flying a mile every 1.6 seconds, well above our Mach 3.2 limit. It was the fastest we would ever fly. I pulled the throttles to idle just south of Sicily, but we still overran the refueling tanker awaiting us over Gibraltar.

Scores of significant aircraft have been produced in the 100 years of flight following the achievements of the Wright brothers, which we celebrate in December. Aircraft such as the Boeing 707, the F-86 Sabre Jet, and the P-51 Mustang are among the important machines that have flown our skies. But the SR-71, also known as the Blackbird, stands alone as a significant contributor to Cold War victory and as the fastest plane ever—and only 93 Air Force pilots ever steered the “sled,” as we called our aircraft.

As inconceivable as it may sound, I once discarded the plane. Literally. My first encounter with the SR-71 came when I was 10 years old in the form of molded black plastic in a Revell kit. Cementing together the long fuselage parts proved tricky, and my finished product looked less than menacing. Glue, oozing from the seams, discolored the black plastic. It seemed ungainly alongside the fighter planes in my collection, and I threw it away.

Twenty-nine years later, I stood awe-struck in a Beale Air Force Base hangar, staring at the very real SR-71 before me. I had applied to fly the world’s fastest jet and was receiving my first walk-around of our nation’s most prestigious aircraft. In my previous 13 years as an Air Force fighter pilot, I had never seen an aircraft with such presence. At 107 feet long, it appeared big, but far from ungainly.

Ironically, the plane was dripping, much like the misshapen model I had assembled in my youth. Fuel was seeping through the joints, raining down on the hangar floor. At Mach 3, the plane would expand several inches because of the severe temperature, which could heat the leading edge of the wing to 1,100 degrees. To prevent cracking, expansion joints had been built into the plane. Sealant resembling rubber glue covered the seams, but when the plane was subsonic, fuel would leak through the joints.

The SR-71 was the brainchild of Kelly Johnson, the famed Lockheed designer who created the P-38, the F-104 Starfighter, and the U-2. After the Soviets shot down Gary Powers’ U-2 in 1960, Johnson began to develop an aircraft that would fly three miles higher and five times faster than the spy plane—and still be capable of photographing your license plate. However, flying at 2,000 mph would create intense heat on the aircraft’s skin. Lockheed engineers used a titanium alloy to construct more than 90 percent of the SR-71, creating special tools and manufacturing procedures to hand-build each of the 40 planes. Special heat-resistant fuel, oil, and hydraulic fluids that would function at 85,000 feet and higher also had to be developed.

In 1962, the first Blackbird successfully flew, and in 1966, the same year I graduated from high school, the Air Force began flying operational SR-71 missions. I came to the program in 1983 with a sterling record and a recommendation from my commander, completing the weeklong interview and meeting Walter, my partner for the next four years. He would ride four feet behind me, working all the cameras, radios, and electronic jamming equipment. I joked that if we were ever captured, he was the spy and I was just the driver. He told me to keep the pointy end forward.

We trained for a year, flying out of Beale AFB in California, Kadena Airbase in Okinawa, and RAF Mildenhall in England. On a typical training mission, we would take off near Sacramento, refuel over Nevada, accelerate into Montana, obtain high Mach over Colorado, turn right over New Mexico, speed across the Los Angeles Basin, run up the West Coast, turn right at Seattle, then return to Beale. Total flight time: two hours and 40 minutes.

One day, high above Arizona, we were monitoring the radio traffic of all the mortal airplanes below us. First, a Cessna pilot asked the air traffic controllers to check his ground speed. “Ninety knots,” ATC replied. A twin Bonanza soon made the same request. “One-twenty on the ground,” was the reply. To our surprise, a navy F-18 came over the radio with a ground speed check. I knew exactly what he was doing. Of course, he had a ground speed indicator in his cockpit, but he wanted to let all the bug-smashers in the valley know what real speed was. “Dusty 52, we show you at 620 on the ground,” ATC responded.

The situation was too ripe. I heard the click of Walter’s mike button in the rear seat. In his most innocent voice, Walter startled the controller by asking for a ground speed check from 81,000 feet, clearly above controlled airspace. In a cool, professional voice, the controller replied, “Aspen 20, I show you at 1,982 knots on the ground.” We did not hear another transmission on that frequency all the way to the coast.

The Blackbird always showed us something new, each aircraft possessing its own unique personality. In time, we realized we were flying a national treasure. When we taxied out of our revetments for takeoff, people took notice. Traffic congregated near the airfield fences, because everyone wanted to see and hear the mighty SR-71. You could not be a part of this program and not come to love the airplane. Slowly, she revealed her secrets to us as we earned her trust.

One moonless night, while flying a routine training mission over the Pacific, I wondered what the sky would look like from 84,000 feet if the cockpit lighting were dark. While heading home on a straight course, I slowly turned down all of the lighting, reducing the glare and revealing the night sky. Within seconds, I turned the lights back up, fearful that the jet would know and somehow punish me. But my desire to see the sky overruled my caution, and I dimmed the lighting again.

To my amazement, I saw a bright light outside my window. As my eyes adjusted to the view, I realized that the brilliance was the broad expanse of the Milky Way, now a gleaming stripe across the sky. Where dark spaces in the sky had usually existed, there were now dense clusters of sparkling stars. Shooting stars flashed across the canvas every few seconds. It was like a fireworks display with no sound.

I knew I had to get my eyes back on the instruments, and reluctantly I brought my attention back inside. To my surprise, with the cockpit lighting still off, I could see every gauge, lit by starlight. In the plane’s mirrors, I could see the eerie shine of my gold spacesuit incandescently illuminated in a celestial glow. I stole one last glance out the window. Despite our speed, we seemed still before the heavens, humbled in the radiance of a much greater power. For those few moments, I felt a part of something far more significant than anything we were doing in the plane. The sharp sound of Walt’s voice on the radio brought me back to the tasks at hand as I prepared for our descent.

The SR-71 was an expensive aircraft to operate. The most significant cost was tanker support, and in 1990, confronted with budget cutbacks, the Air Force retired the SR-71. The Blackbird had outrun nearly 4,000 missiles, not once taking a scratch from enemy fire. On her final flight, the Blackbird, destined for the Smithsonian National Air and Space Museum, sped from Los Angeles to Washington in 64 minutes, averaging 2,145 mph and setting four speed records.

The SR-71 served six presidents, protecting America for a quarter of a century. Unbeknownst to most of the country, the plane flew over North Vietnam, Red China, North Korea, the Middle East, South Africa, Cuba, Nicaragua, Iran, Libya, and the Falkland Islands. On a weekly basis, the SR-71 kept watch over every Soviet nuclear submarine and mobile missile site, and all of their troop movements. It was a key factor in winning the Cold War.

I am proud to say I flew about 500 hours in this aircraft. I knew her well. She gave way to no plane, proudly dragging her sonic boom through enemy backyards with great impunity. She defeated every missile, outran every MiG, and always brought us home. In the first 100 years of manned flight, no aircraft was more remarkable.

Brian Shul served for 20 years as an Air Force fighter pilot. Sled Driver, his memoir of flying the SR-71, features exclusive photos taken by the author. The signed, limited edition book, available for $427, can be purchased by calling 888.777.8383 or visiting www.sleddriver.com.

Pilots, enthusiasts, and casual observers could argue long into the night over their all-time lists of the most significant planes of the past century. I have selected five favorites based on their longevity and excellence in service.

Number 1—SR-71. The crown jewel of aircraft in the first 100 years of flight. The Blackbird did more to shape American foreign policy during the Cold War than any other plane. Despite its premature retirement in 1990, the SR-71 still holds every speed and altitude record.

Number 2—F-15 eagle. The F-15 is the finest fighter jet ever built. It has had no peer for 30 years. Armed with world-class speed and agility, it is the one plane you want to be piloting in a dogfight.

Number 3—B-52 stratofortress. This is the plane that personified “nuclear deterrence.” Through 50 years of modifications, it is still a viable weapons system. When we send the B-52, the bad guys know we mean business.

Number 5—C-47 skytrain. No plane was more important to securing victory in World War II than the C-47. This tail-dragger flew across the Himalayas, towed gliders over Normandy, dropped paratroopers, and supplied every unit with every item it required. The C-47 served in the Korean War, became an integral part of a fledgling airline industry, and gained teeth in Vietnam as a deadly gunship.