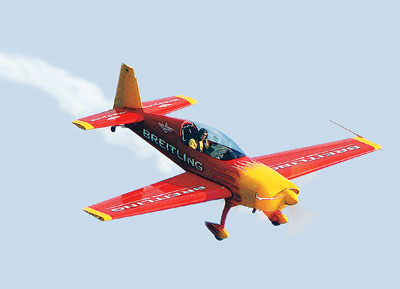 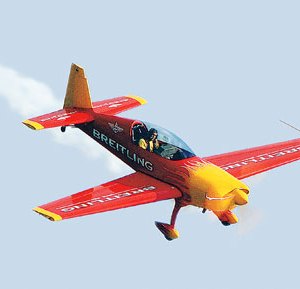 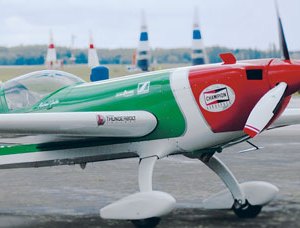 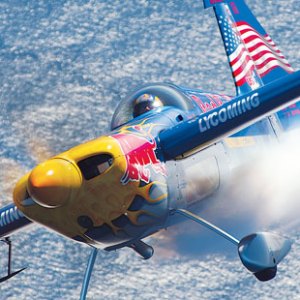 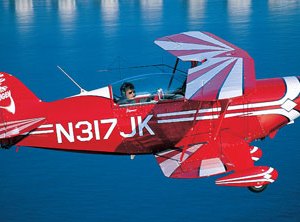 Air show pilot Michael Goulian has flown upside down thousands of times. This will be my first.

I hear his voice, calm and quiet, in my headset: “Watch the nose as it goes above the horizon.” We have climbed to about 4,000 feet over the western suburbs of Boston, surrounded by clear summer sky. Goulian sits behind me under the bubble canopy of his gleaming blue-and-yellow Extra 300 monoplane. “When you can’t see the horizon anymore, turn left and watch the wingtip,” he says. “Then look up through the canopy, and you’ll see the horizon on the other side coming up beneath you.”

As the nose rises, the low layer of broken clouds sinks away beneath us. I turn left and watch the wingtip sweep past vertical until we are flying with our feet toward the sun and the clouds are approaching from the far horizon. Then we turn upright again, and the world is back below us. We have completed a loop, one of the most basic maneuvers in the aerobatic playbook.

I am disoriented and drained—and anxious to try it again.

After we touch down, Michael Cappiello, an instructor at Goulian’s flight school, Executive Flyers Aviation, tells me more about training. It takes only about 10 hours to become familiar with basic maneuvers, he says. Many pilots begin their lessons in a gentle, forgiving aircraft such as American Champion’s Decathlon airplane or Aviat Aircraft’s Pitts Special, a compact biplane with a design that dates to the 1940s. The Sukhoi and Extra aircraft both feature powerful engines and handling akin to a sports car’s. The French-built CAP 232, meanwhile, is popular with air show pilots because of its willingness to tumble, a tail-over-nose somersault that you definitely are not ready to attempt after 10 hours of training.

In addition to the loop, beginners soon learn a half dozen or more other maneuvers. Some aerobatic stunts were first developed in the 1930s by barnstormers looking for ways to wow crowds, while other skillful moves were invented in the heat of battle. In the Immelmann, named after the World War I German ace Max Immelmann, a plane loops up until it is upside down, then rights itself and flies off, achieving a 180-degree turn in a very short distance—a trick that undoubtedly would prove useful in dogfights.

Like the early barnstormers, aerobatic pilots today continue to invent moves to impress spectators. This year, more than 10 million people will attend aerobatic shows worldwide, including amazing displays at the Experimental Aircraft Association’s AirVenture, held every July in Oshkosh, Wis., and at Sun ’n Fun, held every April in Lakeland, Fla. At events such as these, you can see Sean Tucker fly backward at 100 mph in a Pitts biplane, Patty Wagstaff cut a ribbon stretched 22 feet above the runway with the propeller of her Extra 300S—while flying upside down—or the Red Baron Squadron flying four modified Stearmans, brawny World War II–era biplanes, in a choreographed ballet.

Air races are not quite aerobatics, but they certainly qualify as an extreme aerial sport. At the Red Bull Air Races, hordes of spectators watch top pilots fly a slalom race in the air at breakneck speeds. This year’s Red Bull schedule includes nine races, mostly throughout Europe; the one U.S. event is in San Francisco on October 7. Red Bull fliers compete on a tight, low-altitude course marked by inflatable pylons, while huge screens display live video from cameras mounted inside the cockpits and on the wingtips.

In September, Nevada hosted the Reno National Championship Air Races, as it has done every year since 1964. Six classes of planes compete in packs, sprinting around a curving course marked by pylons. The largest aircraft are the Unlimiteds, modified World War II fighters that thunder over the eight-mile course at speeds as fast as 500 mph.

Aerobatics seems dangerous and extreme, but fliers insist that a careful pilot can enjoy the sport safely. Goulian observes that the anxiety felt by many beginners is simply fear of the unknown and that confidence builds quickly with practice. Above all, he says, pilots need to remember to remain humble and a little scared.

The Federal Aviation Administration does not require any special tests or certificates to fly or teach aerobatics. The airplanes, however, must be certified to withstand at least six times the positive force of gravity (plus-6 g’s) and three times the negative force (3 g’s). Aerobatic maneuvers put stress on an airframe, so rugged machines are required. Pilots also feel bodily stress from the g-forces, but they quickly build a tolerance.

Once students learn the moves, they may decide to enter one of the many contests that the International Aerobatic Club (IAC) stages. Beginners start in the Basic or Sportsman category and work up to Intermediate; the ambitious go on to Advanced and Unlimited. The first day of a typical contest, each pilot flies two four- or five-minute routines within the aerobatic “box,” the cube of air that serves as the competition space. Those pilots who fly well enough to qualify for the next round of competition receive a sequence of maneuvers to study overnight and then fly the next day in front of the judges.

Of course, not all pilots learn aerobatics so that they can perform in competitions. Peter Gish, a managing director of a wind-power company who flies at Goulian’s flight school, loves to just “yank and bank.” Soon after he began flying at age 40, Gish realized that puttering along on a level course in a single-engine Cessna did not offer him enough excitement. “But within about three minutes of climbing into a Decathlon,” he recalls, “I fell in love.” He enjoys flying a taildragger, an old-fashioned aircraft with a nose that points up to avoid digging into soft fields during landings. “Once we started going upside down, I knew I couldn’t get enough of this,” Gish says. “And no matter what we were doing, even five-turn spins, it felt comfortable and relaxed.”

It took only one aerobatics lesson for me to share his sentiments. During my flight, Goulian demonstrated an aileron roll, then invited me to do one. As the nose rose a bit, I pushed the stick full left. The left wing dropped, the horizon spun, and it was over. I had accomplished a feat that an hour before seemed impossible, and congratulated myself on a challenge overcome. Already, I was feeling a habit beginning to form.