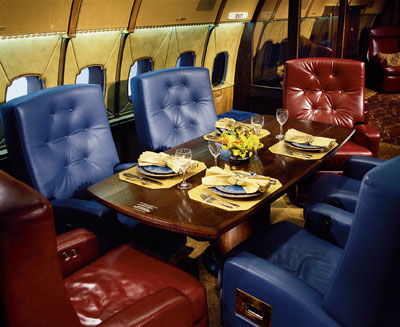 When Phil Condit resigned from his position as CEO of the Boeing Co. amid a defense-contracting scandal at the end of 2003, he not only relinquished his job, he also gave up the home away from home—built for him by the company—that transported him on his travels. His executive perk, a Boeing Business Jet with a cabin that one of its designers says resembles “an Americanized English gentlemen’s club,” has become the showcase aircraft for Skyhome, Boeing’s fledgling program for creating custom interiors for its BBJs.

Although Boeing only recently launched the program, the Skyhome plane’s origins date to nearly six years ago. In early 2000, when the aircraft market was slumping, Boeing commissioned a long-range study to determine, based on feedback from potential buyers, the best ways to utilize the 1,000 square feet of cabin space offered by the converted 737 airliner. Boeing initiated the study because it suspected that those who employ their business jets as living spaces when traveling, rather than just as fast and convenient means of transportation, would prefer a cabin that evoked their own homes rather than hotel rooms, as interiors designed by completion centers often did.

Boeing enlisted Leavitt-Weaver, a 12-person furniture and interior design firm in Ceres, Calif., to analyze how the interiors of the BBJ and other aircraft could be improved. The firm interviewed a number of CEOs, asking them, among other things, about their favorite rooms in their houses. The Leavitt-Weaver team studied these executives’ hobbies and identified the surroundings that helped them to relax and those that contributed to their productivity. From its research, the firm produced a design that exploited the BBJ’s size and flexibility and included new concepts for cabin configuration, furniture, and cabinetry.

Shortly after the study was completed, a BBJ became available off the production line. With an unclaimed aircraft available and its own CEO willing to serve as a test subject for the experiment, Boeing assembled a team of independent designers to transform the Leavitt-Weaver sketches into an actual aircraft. It could justify the multimillion-dollar expense, because when completed, the jet would become a company asset that showcased the possibilities of a BBJ. In addition to Leavitt-Weaver, Boeing hired New York designer Don Thompson, who had extensive experience in aircraft design, engineering, and the FAA certification process, and Bob Swain, an architect in Seattle.

The team began by spending enough time with their client, Condit, to identify his requirements for the plane. “We wanted to give him a sanctuary to deal with the emotional and physical stress that comes with constant travel,” says Stephen Weaver, who cofounded Leavitt-Weaver with Craig Leavitt 29 years ago. “We got a sense of his lifestyle, his family, and how he was going to use his airplane,” says Thompson, who has been designing jet interiors for decades. He often works with clients who are on their second or third aircraft, because, he says, as owners gain more experience with aircraft interiors, they are more likely to hire an independent designer to customize their plane. After all, he says, you would not want the builder to design the interiors of your new home.

Working closely with the designers and following thousands of pages of sketches, Jet Aviation, a completion company in Basel, Switzerland, produced an interior that, despite its setting within a corporate aircraft, was intended to feel familiar, comfortable, and homelike—like a favorite pair of silk pajamas rather than a razor-sharp suit. “Although the final design wasn’t necessarily something that came from our heart, it was meant to be as close to what the client requested as we could possibly make it,” says Weaver.

With antique wood veneers, the plane’s cabinets appear to be family heirlooms. The lounge area is arranged like a family room of a house, with a TV, bookshelves, and a low table for holding snacks and magazines. The window shades are made from polarized film, enabling passengers to adjust the light levels in the aircraft, rather than choose between brilliant daylight and darkness. Although the handles and knobs on the drawers and cupboards had to be certified by the FAA, as did every other interior component, they are plated with bronze, which tarnishes naturally to produce an antique appearance.

The generously proportioned armchairs sport leather that Teddy and Arthur Edelman of Edelman Leather finished in a manner that makes them look invitingly worn. V’soske handmade Irish carpets woven with subtly shifting shades of silk and wool create a sense of depth. (The FAA frowns upon plush carpets.)

The plane also features architectural innovations. The crew can remove part of the bulkhead between the galley and the dining area to form a buffet space. The office area is equipped with a Murphy-style bed that folds down from one of the walls, enabling the space to serve as a bedroom when needed. The master bedroom suite includes a sitting room and an office.

The completion of what is now the Skyhome aircraft coincided with the airline industry fallout from the 9/11 terrorist attacks. After Boeing announced at the end of September 2001 that it would lay off 30,000 employees, the company reined in publicity about the plane. Now that aircraft sales are healthier, Boeing has lifted the veil from the plane, which has become a perk for other company executives, who use it frequently for travel. By showcasing the Skyhome plane, Boeing expects to design more like it. “We hadn’t heard from Boeing for a couple of years, but they’re starting to call again,” says Weaver.

Boeing believes a market for the Skyhome program exists. While 60 percent to 70 percent of BBJ sales are to heads of corporations and heads of state who prefer fairly standardized interiors, the rest are purchased by individuals who, says Boeing Business Jets president Steven Hill, “want to put their own stamp on the interior.” Such a stamp can carry a price tag in the tens of millions of dollars, on top of the $40-million-plus cost of a new BBJ. “It’s about personalization, and you can’t get it from a completion center,” says Hill. “By having designers focusing on the individual’s taste, you are freer to invent and be innovative.”