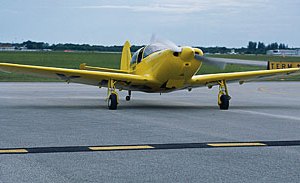 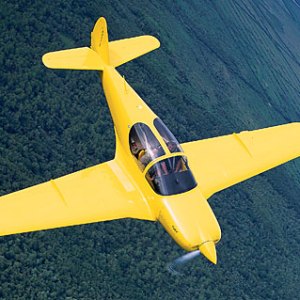 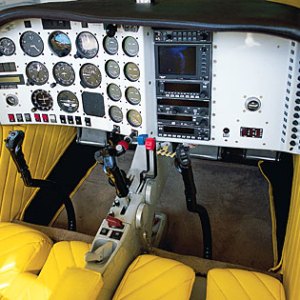 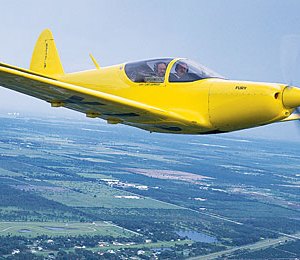 Snce he was 5 years old, Roy LoPresti had dreamed of building and flying a machine like the Fury. Then in 1988, LoPresti, an aircraft designer and former U.S. Air Force combat pilot, completed the manifestation of his boyhood imagination: a two-seat, high-performance prototype. LoPresti had convinced his four sons to quit their aeronautical engineering jobs—Curt was working for LTV, Jim for Rutan Aircraft Factory, Bud for McDonnell Douglas, and David for Boeing—and help him produce and sell an aircraft that would carry their family name.

Two years later, father and sons learned just how quickly a high-flying invention such as theirs can plummet. In 1990, Piper, the Florida manufacturer contracted to build the Fury, filed for bankruptcy, which led to an eight-year lawsuit over the plane’s rights, certificates, parts, and tools required to construct the aircraft. “My whole family moved here to work on the Fury project in 1987,” recalls Curt. “When Piper went bankrupt, the whole family was essentially out of work.”

Rather than ground the plane, in 1991 the clan launched LoPresti Speed Merchants, an aviation design and consulting firm, to keep the family employed and to raise funds for producing the Fury themselves. While the family worked with aircraft manufacturers to make faster planes, they continued the lawsuit. The LoPrestis gained control of the Fury’s rights—they are not allowed to discuss specific terms of the lawsuit—and were on their way to rebuilding the plane, but in August 2002, the family patriarch was killed in a household accident at the age of 73.

The sons, while stunned by the death, were determined to fulfill their father’s dream. They recently completed the Fury prototype, an updated version of Roy’s original plane, which I was invited to fly earlier this year. The test brought back memories of a flight that Roy and I took in 1990 aboard my Siai-Marchetti SF260, a 225 mph acrobatic Italian aircraft that LoPresti had used as a benchmark when designing the Fury. LoPresti, who I had come to know when he helped me modify my Mooney 231 for racing, had never before flown aboard the SF260. “We have a lot of work to do,” he surmised after the flight. He promised me a flight in his Fury, but it took 14 years for the pledge to be fulfilled.

LoPresti began his career in the 1950s at Grumman, where he worked on the Apollo Lunar Module and the Tiger, which became a top-selling plane through the 1970s. LoPresti also designed at Mooney, where he transformed the Model 20, an aircraft that could barely reach 160 mph with its 200 hp engine, into the 201, a designation that referred to the aircraft’s top speed. In 1986, after two years as Beech Aircraft’s head of engineering, LoPresti entered into a joint venture with Piper to develop new aircraft for the company. Among the projects planned by LoPresti Piper Engineering was the Fury.

Throughout his career, LoPresti wanted to build a plane similar to the SF260, a sporty aircraft known as a “flying Ferrari.” His version would be just as fast, include enough storage space for golf bags and weekend luggage, and look and handle like a fighter while offering the comfort of a more practical plane. “Roy had a gut feeling about developing aircraft for niche markets,” Curt says. “He knew the sort of airplanes that he liked and figured that other pilots would like the same thing.”

In 1986, LoPresti obtained the design rights to the 1947 Globe Swift, which he planned to use as a template for the Fury. However, the Swift could reach only 140 mph—about 100 mph slower than the top speed LoPresti desired. He completely reworked the Swift, reshaping the fuselage, reducing the thickness of the plane’s skin, and altering the rake of the windshield. The resulting Fury, an entirely new aircraft, could penetrate turbulent air at maximum speed. LoPresti offered the aircraft to Piper as a new product, but Piper management did not embrace the plane. Two-seat aircraft, regardless of speed or aerobatic capabilities, were deemed to have limited appeal; the volume of sales, Piper determined, would not justify the design, development, and certification costs of such a niche-market machine. However, LoPresti negotiated a deal by which Piper would manufacture the Fury and he would be responsible for the aircraft’s sales and distribution.In the late 1980s, flying publications gave the Fury prototype rave reviews, praising its speed, range, comfort, and handling. But even with the favorable press, it seemed the $125,000 aircraft would have little chance of succeeding because at the time the small-aircraft market was so moribund. “We expected to maybe get 30 orders, if we were real lucky,” Curt recalls.

As it turned out, at the 1988 Experimental Aircraft Association show in Oshkosh, Wis., LoPresti accepted 131 firm orders for the new aircraft, and over the next few months, the number of orders increased to 569. The tooling was complete, parts had been manufactured, and the aircraft was ready to begin the FAA certification process and go into production, when Piper declared bankruptcy, spurring the creation of LoPresti Speed of Mooney M20s, Piper Cherokees, and other planes, but remained determined that the Fury would fly again.

The hangar at LoPresti Speed Merchants’ Vero Beach, Fla., facility is filled with aircraft in various stages of modification. A sign on the wall reads “Life Is Short . . . Fly FAST.” Curt LoPresti now heads the company, and he and his brothers have made minimal changes to their father’s 1988 iteration of the Fury. “The aircraft is ready for immediate certification and production. All we need is the money to do it,” Curt says. “We have a metal airplane in a normal configuration that has no surprises in production, and that simplifies certification over a composite design. The aircraft has been well received by the public and has a proven market. The whole family is still involved in the project.”

In one corner of the hangar is the first production Fury, the aircraft that will be used for certification. “The tooling and development are paid for with no costs to carry forward, which puts us in a unique position compared to other companies that have millions borrowed for design, tooling, and a prototype,” says Curt. Financing meetings take place almost daily, and the LoPrestis, who are currently working with the FAA on certifying the $275,000 plane, expect delivery to begin by 2007.

Outside the hangar is the updated prototype. It looks like a World War II fighter, a compact airframe that is covered in aluminum held in place with flush, hand-set rivets. Under the sliding canopy, pilot and passenger sit side by side, and behind them is space for golf bags, luggage, or an aerobatic smoke system. The Fury’s control grips include switches for the flaps, speed brakes, and lights, in the HOTAS (hands on throttle and stick) configuration found on modern fighters.

The powerful 200 hp Lycoming 360 engine operates smoothly, and on this humid, 90-degree South Florida day, the Fury quickly lifts off and settles into a 1,500-feet-per-minute climb. With Curt LoPresti at my side, I level off and the plane settles at a cruising speed exceeding 210 mph, though the tail wheel retraction system and enclosing doors were inoperative for this flight. Far more speed is available in this airframe, especially if equipped with the proposed 260 hp engine.

The controls operate like those in a military aircraft: direct, precise, friction-free, light, and responsive. Control harmony, that difficult-to-engineer balance of forces used in pitch, roll, and yaw, is perfect. Banking into a steep turn, I can look up through the canopy to spot traffic while maintaining altitude by reacting to the control forces fed back to my fingertips on the stick. Using a little control pressure to raise the nose above the horizon, I then flick the stick to the left to negotiate a beautifully coordinated roll.

As I pull the nose up to execute another roll, Curt says, “You know that Roy is with us.” I hope the old man is enjoying the ride as much as I am.