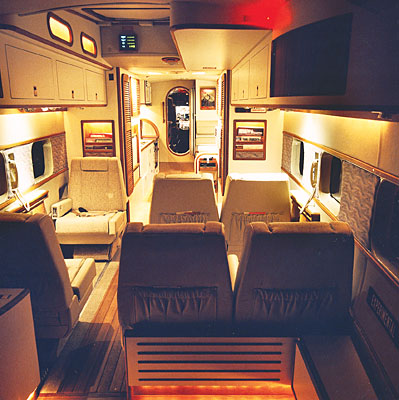 Joe Vittoria smiles as he recalls the time several years ago that his Grumman Albatross landed off the coast of Connecticut. “It sure attracts attention,” says Vittoria, the 70-year-old former chairman and CEO of the Avis rental car company and the owner of three sailing yachts, including Mirabella V, the world’s largest sloop. He employs his Albatross, a 61-foot-long, 15-ton amphibious aircraft, to transport himself and his charter passengers to and from his yachts. “The plane was meeting us in Greenwich,” says Vittoria. “I had gone out in a small boat to ask some guys to move their boats out of the channel, telling them that a plane would be arriving shortly. They all gave me this look, and told me that there was plenty of room for a plane to land.”

Craig Young, who pilots the Albatross for Vittoria, laughs as he continues the story. “There was this island that blocked the view that these guys had of the channel, so they didn’t see me coming until I rounded the island on final. They must have been expecting some little floatplane, so they weren’t prepared for anything as big as the [Albatross]. They were really surprised when I came around the corner. I can tell you, it sure got them moving in a hurry.”

In addition to the Albatross and the sailboats, which he offers for charter under the auspices of Mirabella Yachts, Vittoria owns Mirabella Aviation, a company in Fort Pierce, Fla., that specializes in the repair and restoration of vintage Grumman amphibians. Young is Mirabella Aviation’s director of operations. Inside the aerospace and defense conglomerate Northrop Grumman, developed and built several types of amphibious aircraft that continue to enchant collectors. Among them are the G-21 Goose, originally designed as a civilian aircraft but adopted by the American, British, and Canadian military forces for use in World War II; the G-44 Widgeon, a slightly smaller version of the Goose that also saw combat; the G-73 Mallard, a business aircraft that was produced from 1946 through 1951; Mirabella’s facility, amid the constant clatter of pneumatic tools, a Turbine Mallard (G-73T) is being completely restored. The airframe has been stripped to bare metal and is perched on stands beside the wing, which has been removed and mounted on a fixture for inspection and repair.

Nearby, a Grumman Widgeon awaits outfitting, while in the center of the space, another Widgeon—one of five that are owned by the same customer—is undergoing a ground-up restoration that includes extensive modifications.

From the 1930s to the 1960s, the Grumman Aircraft Engineering Corp., which has since become and the HU-16 Albatross, a large and impressive postwar plane that several branches of the U.S. military employed in search-and-rescue operations.

After World War II, commercial operators, enamored with the planes’ sturdy construction, purchased surplus Gooses and Mallards. A number of Gooses and Widgeons were modified by McKinnon Enterprises, an Oregon company that was active during the 1960s and eventually relocated to Canada, where it was subsumed by the Viking company.

McKinnon Airpark, the company’s former production facility and airstrip in the western foothills of the Oregon Cascades, now belongs to Mike Reese, a local businessman who owns a Super Widgeon that he stores alongside a pristine Super Cub on amphibious floats and a Jaguar XKE roadster in the original McKinnon bow-roofed hangar. McKinnon’s Super Widgeon conversion typically involved modifying the hull, increasing the airplane’s fuel capacity, and removing the stock motors, replacing them with 6-cylinder Lycoming GO-480 engines and three-blade propellers. The conversion increased the Widgeon’s speed and maximum takeoff weight, and improved its climb performance and range. McKinnon also would install updated IFR avionics, wider cabin windows, better soundproofing, an emergency escape hatch, and, if requested, retractable wingtip floats.

Reese has flown his Super Widgeon far and wide and has thousands of hours of experience in seaplanes, but he warns that the aircraft can be a handful when operated on the water, even for an experienced pilot. Other Widgeon owners agree, noting that if rough waters submerge one of the pontoons upon takeoff or landing, the plane can become extremely difficult to control.The cost of rejuvenating a Grumman amphibian also can be difficult to control, primarily because of the FAA’s airworthiness requirements. The total restoration bill for a Widgeon can exceed $1 million, and reclaiming a larger Grumman, such as an Albatross or a Goose, can cost more than $6 million, depending on the extent of the modifications performed and the complexity of the avionics installed.

While an owner has to meet FAA regulations, his level of concern with preserving the plane’s authenticity will guide the rest of the restoration. As with vintage car collecting, creating a plane that is better than new is not necessarily the objective. However, this was Reid Dennis’ goal.

Dennis, a Silicon Valley venture capitalist, acquired his Grumman Albatross a decade ago and extensively modified it. He melded various parts and components—wings, vertical stabilizer, and rudder—from one Albatross model to the airframe of another, which, he says, vastly improved the aircraft’s handling on and off the water. “Because of the larger control surfaces and changes made to the length and leading edge of the wings, the plane is a lot smoother and more controllable than standard models,” says Dennis. “It’s a delight to fly.”

The modifications extend to the interior, which resembles that of a yacht more than an airplane. Teak abounds, appearing in the floor planks, bookcases, and crystal cabinets. The forward of the two cabins includes a galley and dinette area. Behind that is a seating area with fully reclining chairs that can be arranged in a club configuration or in the more common forward-facing position. The toilet compartment, located in the rear of the plane, has been enlarged and its floor equipped with a teak grate that allows passengers to take a shower while anchored or en route. Each of these enhancements served a purpose during a 12-day span in 1997, when Dennis’ Albatross became the first seaplane to make the 26,000-mile journey around the earth.

The debate among collectors over authenticity also includes the airplanes’ means of propulsion. Many owners have an almost fanatical affection for the radial engines that were among the original equipment on all Grumman amphibians. These collectors insist that their aircraft remain fitted with round engines, while others prefer horizontally opposed piston engines or turbines for their increased performance and lower maintenance costs.

Power plants aside, seaplanes demand more airframe maintenance than other vintage aircraft because they come in contact with water. “I can’t give you exact numbers,” says Mirabella Aviation’s Young, “but if you look at other types of aircraft, I think most operators factor three and a half hours of maintenance for every flight hour and from five to seven hours for helicopters. With saltwater use, we see eight to 10 per flight hour, which is a lot. It’s corrosion that gets us.”

Nevertheless, the joy of flying these planes compels the owners to keep them aloft despite the considerable expense. As Young notes, these aircraft can make quite an impression—even on someone who never has piloted or flown in a Grumman. “When I first started flying Joe’s plane, I needed to meet the boat in Sag Harbor [Long Island],” he says. “We landed in the outer harbor and taxied up to the boat, which was anchored near a pretty big motor yacht. The crew told me that the motor yacht had had a helicopter ferrying people to the marina the day before and that it had created quite a stir.

“Well,” continues Young, “pretty soon, this tender left the motor yacht and rushed over to our boat. The guy in the boat looked at the plane, looked at our boat, then shook his head and said to the crew and me, ‘OK. You win.’ ”