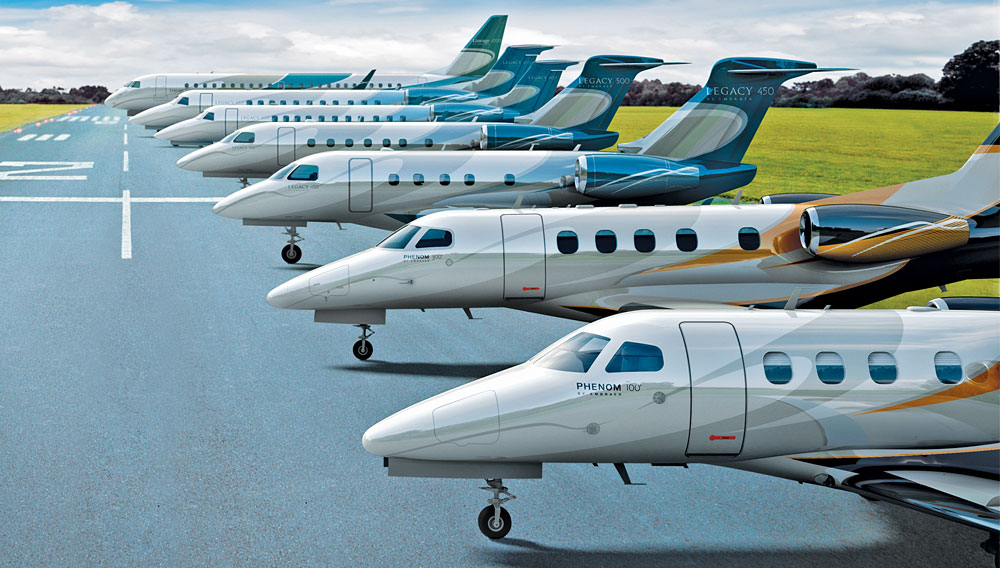 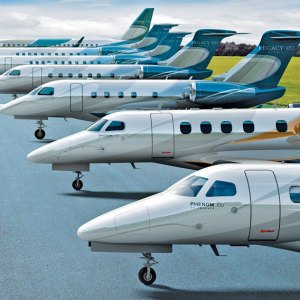 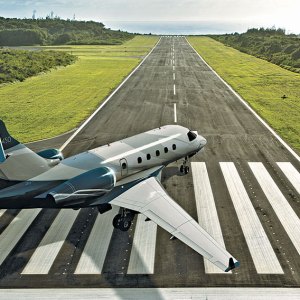 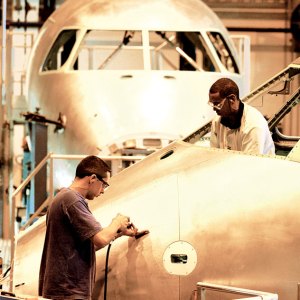 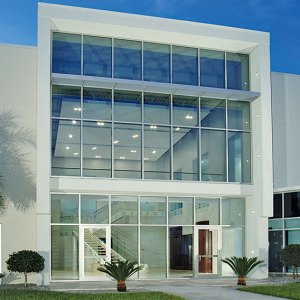 Anyone who has ever been to a Brazilian churrascaria knows to bring an appetite. On a late-August evening, aircraft manufacturer Embraer hosted a dinner at one of these steakhouses near the company’s main production center in São José dos Campos, in the southern Brazilian state of São Paulo. The guests were media members and other visitors in town to tour the Embraer facilities, meet company executives, and learn about a pair of new business jets.

At the restaurant, what seemed like a mile-long buffet overflowed with cheeses, starchy foods, vegetables, and other side dishes, while servers made constant rounds to the table, carrying skewers of various barbecued meats and piling a small mountain on each plate. Mounted upright at the center of the table was a plastic disk; the top half was green and the bottom half red. The servers would continue to arrive with more meat until someone turned the disk so that the red half was on top, indicating that everyone had had his or her fill.

Ernie Edwards, a Welshman who last May became president of Embraer’s Executive Jets division, gestured toward a skewer of curious-looking lumps and urged one of his tablemates to try one. “Coração de frango,” he said, grinning as he named the dish to his guest (who, he knew, did not speak Portuguese). Having already consumed one or two or maybe more caipirinhas—Brazil’s national cocktail, made from cachaça, lime juice, and enough sugar to kill a diabetic horse—the guest felt brave enough to sample the mystery meat. Later, after one of the diners had spun the disk from green to red, Edwards identified the meat as chicken hearts.

The choice of restaurants was a good one, and not just because none of the guests left hungry. Chicken hearts and all, the churrascaria dinner could serve as a metaphor for Embraer and the way it operates. Having introduced five different business jets in the last decade, the company now has a model to suit just about every palate, and it continues to bring new offerings to the table.

Embraer, which has produced military aircraft and commercial airliners since its founding in 1969, launched its Executive Jets program in 2001 with the super-midsize Legacy 600. Since then, the company has brought four additional business-jet models into service—ranging from the entry-level (or very light) Phenom 100 to the ultralarge Lineage 1000—and it is in the process of moving two more new jets off the drawing board, onto the assembly line, and into the air. The midsize Legacy 500 is expected to enter service around the end of next year, the light-midsize Legacy 450 a year later.

Like Embraer’s other jets, the new models represent the company’s ability to design aircraft that cross over categories. Consider the four-seat Phenom 100, which entered service in 2008. The entry-level jet’s price (about $4 million) and fuel efficiency (it can burn as little as 77 gallons of fuel per flight hour) are more characteristic of a new turboprop. The larger Phenom 300, which followed the Phenom 100 into service in 2009, is a light jet that borders on a light midsize because of its cabin size and performance capabilities.

The popularity of these aircraft, the Lineage 1000, and the Legacy 650 (an upgraded and longer-range version of the Legacy 600 that went into service in 2010) has enabled Embraer to become the world’s fastest-growing business-jet manufacturer, increasing its market share from 2.7 percent in 2005 to 19 percent in 2010. (The 2011 sales figures were not complete when this issue went to press.) That year, Embraer delivered more business jets than Dassault Falcon, Hawker Beechcraft, or Gulfstream, and it was nipping at the heels of Bombardier and Cessna, each of which held just over 20 percent of the business-jet market. “[In 2010], the Phenom 100 was the most-delivered business jet, and the Phenom 300 was the most-delivered light jet,” said Edwards, a 40-year aviation industry veteran who has been working for Embraer since 2005. As of December 2011, more than 230 Phenom 100s and 60 Phenom 300s were in operation.

The growth in sales has prompted Embraer to expand its production capabilities. In addition to breaking ground on a facility in Portugal, where it will construct parts for the Legacy jets, the company has completed a facility in Melbourne, Fla., that will serve as the global headquarters for the Executive Jets division. The Florida operation, a $50 million investment for Embraer, includes an 80,000-square-foot assembly plant for the Phenom 100 (Embraer delivered the first U.S.-built Phenom 100 in December), a production hangar, an administrative building, and a delivery center for jet buyers.

While Embraer plans to build a sizable percentage of its Phenom jets in Florida eventually, Edwards says this expansion is intended primarily to accommodate the large number of jets currently on order—not to help introduce new models. As of the third quarter of 2011, Embraer had an order backlog of roughly $16 billion, due largely to the uptick in its business-jet and military-aircraft sales. Edwards expects the new Legacy models—the $19.9 million 500 and $16.5 million 450—to keep the business growing.

Embraer presented a mock-up of the Legacy 500 cabin at the National Business Aviation Association conference in October in Las Vegas, and it also had a mock-up on display for the visitors touring the São José dos Campos factory several weeks earlier. Construction of the first Legacy 500 is well under way at the factory, and the jet is on track to perform its first flight in late summer or early fall. It is a clean-sheet design; its name is one of the few features it shares with the other Legacy models. Its cabin—which, like those of the two Phenom models, was designed in collaboration with BMW Group DesignworksUSA—will have a flat floor and enough headroom for a 6-foot-tall passenger to walk the aisle without ducking. Cessna’s new Citation Latitude (see Robb Report, February 2012), due to arrive in 2015, is the only other midsize jet that will offer a stand-up cabin with a flat floor. Like the Phenom models, the Legacy 500 will have crossover characteristics, as Alvadi Serpa, a member of the Executive Jets product-strategy team, noted: “It has a longer cabin than any jet in the midsize segment and a similar cabin to those of the super-midsize jets.”

The Legacy 500’s performance capabilities also push the envelope for the midsize category. Assuming Embraer achieves its design goals—it surpassed those it set for the Phenom 300—the new jet will be able to carry eight passengers from coast to coast in any wind conditions without refueling. No other midsize jet has that range. With an eight-passenger, 2,800-pound payload, the jet will climb to an initial cruising altitude of 43,000 feet in just 22 minutes and reach speeds beyond 600 mph.

The Legacy 500 also will be the only midsize jet with full fly-by-wire flight control, meaning the pilot will control flaps and rudders with an electrical, computer-monitored system instead of manually with hinges and tracks. This technology, which greatly reduces the pilot’s workload and can maximize a plane’s performance, is usually found only on jumbo jets and ultralong-range business jets.

The Legacy 450 will similarly be the only fly-by-wire light-midsize jet. It is virtually the same jet as the 500, but with a shorter fuselage and slightly reduced capacities and capabilities. Embraer has designed the Legacy 450 to significantly outperform other light-midsize jets while maintaining a competitive price and comparable operating costs.

When asked if Embraer has plans to introduce an ultralong-range Legacy to add the only model type missing from the company’s business-jet portfolio, Edwards grinned. “I’ve been asked this question before, and that’s why I smile,” he replied. “I know my sales team would love to fill the hole that’s there, but the engineering team is telling us, ‘You know, guys, give us a break. The Phenom 100, the 300, the Legacy 450, the 500—and oh, by the way, we gave you a Lineage, and we gave you a 650.’ Plus, the corporation is talking more about military aircraft and the future for our commercial regional jets. The engineers are just about maxed out, so they need a break from corporate jets for a while.”

In other words, the engineers have had their fill of projects, and for now, at least, it is time to turn the business-jet-development dial from green to red.

An Inside Guide to the Legacy 500

Embraer’s Legacy 500, which is expected to enter service around the end of next year, will have the most spacious cabin in the midsize class. Designed in collaboration with BMW Group DesignworksUSA, the cabin features a flat floor and a height of 6 feet—unique characteristics for a midsize jet. The cabin is also 26.8 feet long between the bulkheads and nearly 7 feet wide. All of this space enables the Legacy 500 to seat eight to 10 passengers comfortably in most layouts. When the cabin is configured with a belted lavatory and an additional side-facing seat instead of a wardrobe, the capacity increases to 12 passengers. The jet’s five standard configurations call for as many as four pairs of facing club seats. In one layout, a pair of three-place divans replaces four of the seats. Each club seat is fully articulating and can fold down to create a flat sleeping berth with its facing seat.

The Legacy 500 also offers a best-in-class cabin pressurization of 6,000 feet, the most baggage space of any midsize jet—150 cubic feet, 40 of which is heated and accessible during flight—and 15 large windows. The jet’s Honeywell Ovation Select entertainment system lets passengers adjust temperature, lighting, audio, and video, and access media from touchscreens at their seats.