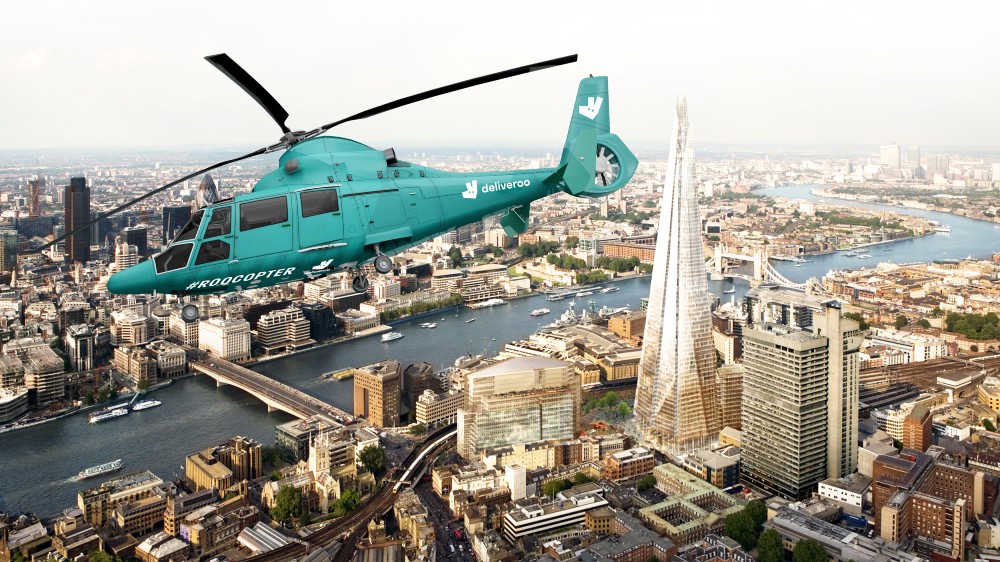 Part of the appeal of a rooftop restaurant is enjoying food while taking in a gorgeous view. But imagine if that restaurant was so high that there were no buildings around to blemish your view of the city—oh, and you were flying. If that were the case, you might be inside Roocopter One, the world’s first helicopter restaurant.

On August 9, Deliveroo will attempt to gauge just how interested diners are in the idea of eating a meal while flying 1,000 feet over the city of London, according to Insider. The a U.K.-based food-delivery service—think a European Seamless—has partnered with Charter-A helicopter fleet to fly users around the city while eating a meal from the likes of Wagamama, Chipotle and Bababoom.

Deliveroo users lucky enough to book a table on Roocopter One will be able to invite up to five guests. On the day of your reservation, you and your dinner party will head to a Battersea helipad where you’ll order your meal from a list of local area restaurants the company has already works with and sit through a brief safety demonstration. Once the food has arrived, the helicopter will take to the skies of the English capital and you will be able to feast on your entree during a 20-minute flight that floats by some of city’s more notable buildings, like the Shard and the O2 Arena. Presumably, food choices will be limited for the initial trial run, though a finalized list was not available. As of press time, it wasn’t clear whether fine-dining options will be included if the program, but count us in favor.

Deliveroo is currently accepting a limited number of registrations for the first meals on Roocopter One. Those lucky enough to get picked will have the entire experience comped by the company, but the cost for the entire package, meal and flight inclued, is expected to come in at around $200 per person once the program is up and running. While the first test-run of the program will be limited to the U.K. capital, the meal delivery service plans to try it out in Sydney, Hong Kong, and Edinburgh over the next two years. You can apply for a ride on Roocopter One here.