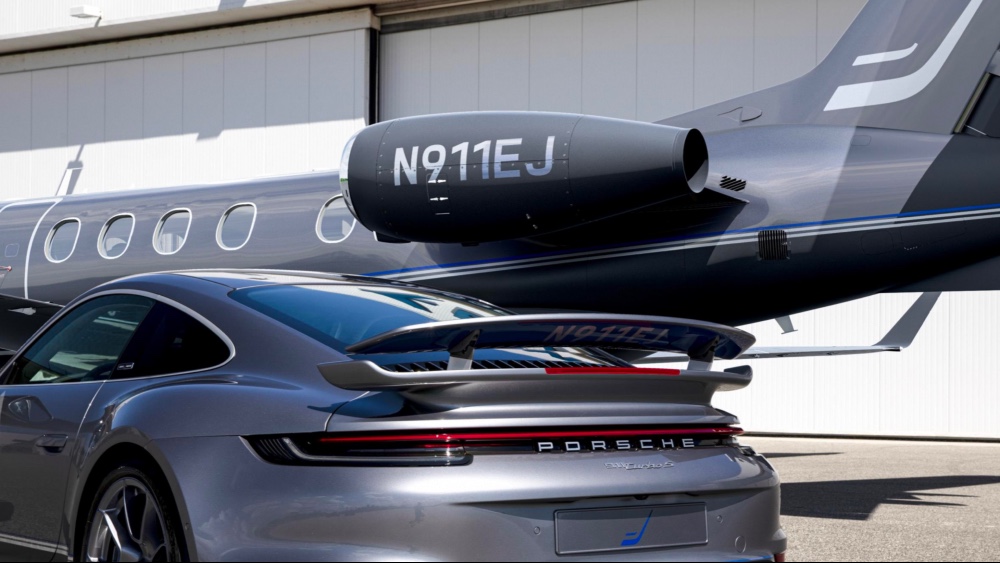 Two iconic brands from very different segments are celebrating a marriage of sorts. The Duet, the just-announced pairing of a bespoke Embraer Phenom 300E aircraft and Porsche 911 Turbo S, will be the world’s first matching business jet and supercar.

The Brazilian aircraft manufacturer and German automaker began collaborating on the project four years ago, representatives from the two companies said in a recent press conference, to link two fundamentally different vehicles with a common design DNA.

“We worked together to benchmark processes,” said Michael Amalfitano, president and CEO of Embraer Executive Jets. “The design was all about exclusivity, but always focusing on the customers.”

The gray exterior is not typical for a business jet, but Embraer said by matching it with the Porsche, it would convey a “high level of sophistication.”  Courtesy Embraer

Just 10 pairs of the business jet and supercar will make up the series, which has a custom logo that combines the aircraft’s emphasis on lift and the car’s focus on downdraft. The pairs will all have a special badge with 10 lines, representing the 10 that will be delivered. Customers will have the option of selecting the location of a blue chip that will show their position among the 10 units.

The designers focused on myriad details to link the two, including big-picture features like exterior colors. The two employed a common paint pallet of Jet Grey Metallic and Platinum Silver Metallic, with trim strips of Brilliant Chrome and Speed Blue. The 911 is entirely hand-painted—unique to this project—to reflect the Phenom 300E’s paint process. The detailing even carries into the alloy wheels of the 911, which are painted with a laser process in Platinum Silver Metallic while exposing a Speed Blue underlay on the rim flange.

Business jets are typically white for heat reflection, but they share the gray exterior of the Porsche. “From an historical standpoint, many aircraft going way back had metallic exteriors,” says Amalfitano. “We wanted to also convey that metallic look, but with a high level of sophistication.”

The pairing of supercar and jet are carried into small details like the alloy wheels, which have been painted a platinum silver metallic color.

Finer details also became critical in matching the 300E and 911. The air intakes on the 911, for instance, are painted in Brilliant Chrome to match the leading-edge nacelles of the aircraft. Even the 911’s door sill trims feature “No Step” lettering, as one sees on an aircraft wing.

On the interior, the sewing style of the seats in the Phenom 300E was patterned after the 911. Both seats have a white upper area, with red pull straps and Speed Blue accent stitches. Carbon-fiber shrouds also emphasize the link. The cockpit seats on the 300E were also redesigned to match the car. Porsche also gave the 911’s steering wheel a unique color combination to match the aircraft’s yoke. And even the Chalk Alcantara trim roof lining on the 911 was designed to look like the aircraft.

“This is the perfect marriage of car and jet,” said Jay Beever, vice president of Embraer Design Operations. “To further solidify this symbiotic partnership, the aircraft registration number appears on both the car’s rear wing and the sides of its key.”

The officials said the Duet would have a starting price of $10.9 million, which will go up with customization requests. First deliveries will happen in 2021.