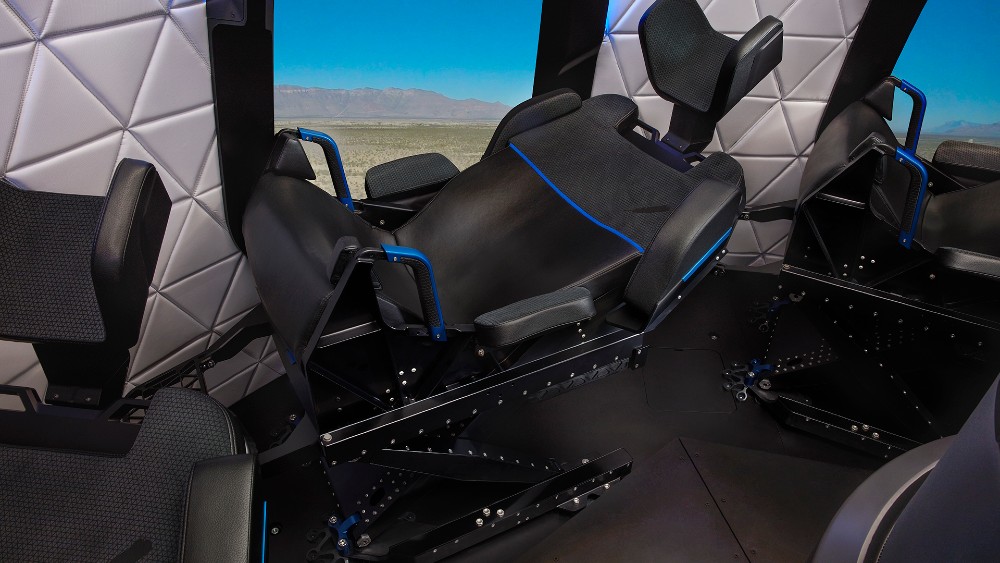 With bids approaching $3 million and expected to climb higher, the last remaining seat on Blue Origin’s New Shepard rocket could become the world’s most expensive first-class ticket. Jeff Bezos’s space-tourism venture yesterday made public its bidding process as it moves towards a one-day public auction on June 12. The 11-minute ride into space is scheduled to take off on July 20, with six passengers aboard.

“We opened bidding on May 5, and have received 5,200 bids from 136 countries,” Ariane Cornell, Blue Origin’s director of astronaut sales, told Robb Report. “We unsealed the highest bid and the bidding will continue to be public until we hold the auction on June 12.” Yesterday’s initial bid was $1.4 million, but within 24 hours it had climbed to $2.8 million.

Want to become the world’s first tourist astronaut? Cornell said potential bidders will need to put down a $10,000 deposit (which is refunded if you don’t have the winning bid) and prove that they can bid $50,000. Bidding is already well north of that, and the public auction should see the final numbers skyrocket, so to speak.

The proceeds will go to Blue Origin’s Club for the Future, which is a foundation “to get kids into the space field, or at least thinking about space,” says Cornell.

The top bidder will not only win a place on the New Sheperd, but will become part of the first space tourist crew.  Courtesy Blue Origin

The high bidder will get two days’ worth of training before the July 20 liftoff at Blue Origin’s space center in the Guadelupe mountains east of El Paso, Texas. The mission is designed to re-create the flight of astronaut Alan Shepard, who became the first American in space on May 5, 1961. Sixty years later, six tourist astronauts will be propelled in a capsule aboard the New Sheperd rocket past the Karman line, the imaginary divider separating Earth from space. They will experience about three minutes of weightless ecstasy, floating around the capsule and looking back at the bright, blue Earth.

A third of the capsule—with 30 times more volume than Shepard’s original Freedom 7—is comprised of windows, so the newly minted astronauts will have exceptional views of the home planet as well as the blackness of space. The capsule will descend back to Earth, with three parachutes deploying for a landing in the Texas desert near the space center.

The rocket and capsule are automated, so the flight will be controlled by computers from takeoff to the parachute landing near Blue Origin’s Texas space center.  Courtesy Blue Origin

Both rocket and capsule are reusable, having completed more than 15 test missions over the past few years, including three “escape” tests that simulated emergency situations. “Everything is fully automated, so two minutes into the flight, the rocket is flying itself,” says Cornell.

The inside of the capsule is a “shirt-sleeve environment,” says Cornell, and while the tourist astronauts won’t be wearing a pressurized suit or helmet, they will have a cool-looking flight suit to provide “a bit of swagger” as they walk to the rocket.

The July 20 launch will be an historic occasion as it marks the beginning of the space-tourism race. Blue Origin will be first out of the box, though it will be competing with Sir Richard Branson’s Virgin Galactic. Seats aboard its SpaceShipTwo Unity were sold for $250,000 for people who signed up early, but a company spokesperson said that further ticket sales will not resume until after Branson has done his first flight.  It’s expected that subsequent seats will be priced significantly higher. The company said that it would complete its next test flight on Saturday, weather permitting.

Billionaire Jared Issacman has paid for four seats on a SpaceX Dragon crew capsule as part of its Inspiration4 mission, which is expected to launch this fall. That flight is expected to be the first private-citizen mission to space.