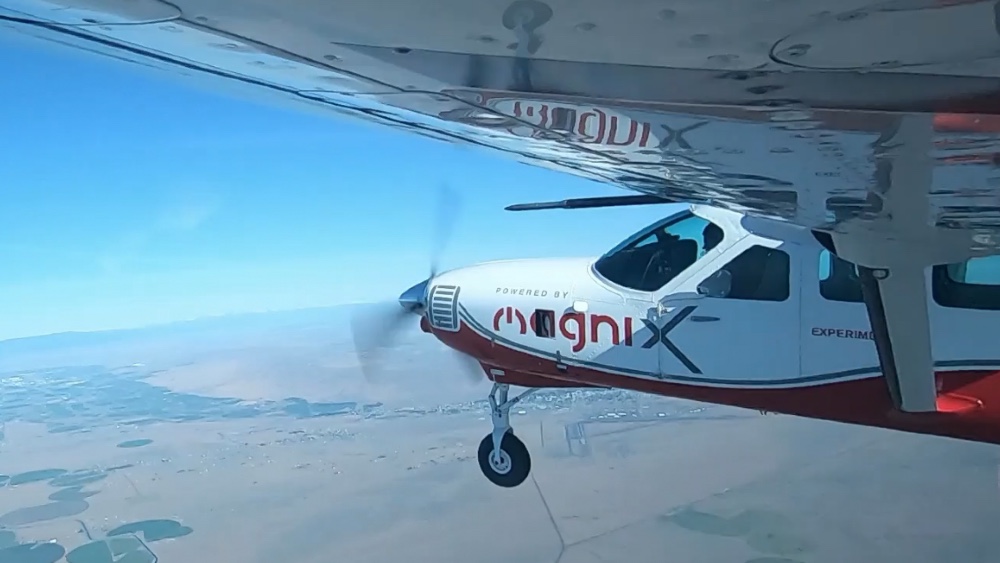 All Images Courtesy of magniX

After last December’s record-setting electric seaplane demonstration with Harbour Air, magniX has recently set a more impressive record in a larger aircraft. The Harbour Air demonstration showed that a seaplane could work on an electric engine, but the converted Cessna Grand Caravan 208B now holds the title for the world’s largest commercial electric aircraft.

The eCaravan has a 750-hp magniX magni500 electric engine, which is significantly larger than the 500 hp electric engine used in the Harbour Air seaplane. The eCaravan flew for 30 minutes near its headquarters above Moses Lake, Wash.

“What magniX learned from the first Harbour Air record is that there is a need and demand for ultra-short flying,” Roei Ganzarski, CEO of magniX, told Robb Report. “Only an electric aircraft can answer these needs with today’s battery technology.”

The Cessna Grand Caravan was chosen as the test aircraft because of its decades-long reputation for moving people and cargo.

Ganzarski’s company is dedicated to connecting communities by creating an era of clean and affordable commercial air travel with all-electric propulsion. The eCaravan may not be the sexiest aircraft in the sky, but it is the most proven. The Cessna model has been used to move people and cargo over short routes for decades.

The eCaravan was developed in conjunction with AeroTEC. “There’s no roadmap for testing and certifying electric aircraft—this is a new frontier,” said Lee Human, president and CEO of AeroTEC.

One of the beauties of this new frontier is that the magniX engine can be used on older aircraft, extending their life far beyond the original design.

While the eCaravan is currently the world’s largest electric commercial aircraft, the magniX electric engine could potentially be used in larger aircraft—though it might be some time before it moves to large jets.

The partners chose the Cessna Caravan as its test aircraft because it’s one of the most common “middle-mile” aircraft (50 to 1,000 miles) in use around the world. “The industry can revitalize its Middle Mile passenger and cargo transportation workhorse as an all-electric solution,” Ganzarski said, adding that the magniX magni500 could be a good fit for even larger aircraft. The electric motor produces most of its power at a very efficient 1900 rpm.

Fifteen years from now, Ganzarski believes that all flights of less than 1,000 miles will be electric. “These electric flights promise shorter routes with more convenient door-to-door traveling and lower prices, relative to the distance traveled,” he says. “This first flight of the eCaravan is another step on the road to operating these middle-mile aircraft at a fraction of the cost, with zero emissions, from and to smaller airports.”

Last month’s flight will be used in the certification and approval process of the magni500 system, added Ganzarski.