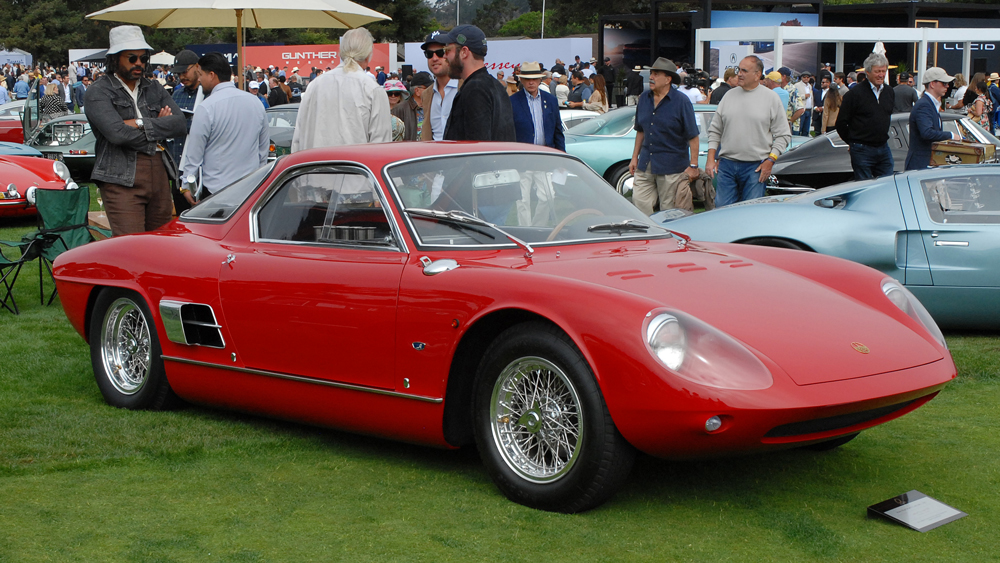 Now in its 19th year, The Quail, A Motorsports Gathering is a unique concours event, punctuated by classics, concept cars and great cuisine. The show has always been an oasis of sorts, carrying a leisurely pace throughout the day and with an unpretentious air in the presentation of cars and even a few motorcycles that decorate the lawn. So, for another year, I walked the field with my friend Scott Williamson—acclaimed automotive photographer and contributor to Robb Report since 2001—debating the merits of the many cars arrayed before us, occasionally remarking on the variously attired spectators strolling the grounds.

If there’s a theme this year to our selection of cars, it is simply that “predictable” takes a back seat to “unusual.” After all, the greatest pleasure and surprise of any concours is seeing cars with which one is not familiar, or at least, encountering those rarely seen. So, Scott and I can confidently say that our ten picks—from old-timers to restomods to concepts, and listed chronologically—are as unusual as they are captivating, each in its own way.

In 1934, Edsel Ford, then-president of Ford Motor Company, asked styling chief (that’s what they were called in those days) Eugene T. “Bob” Gregorie to create a one-off Continental Roadster as a possible production concept. That never came to pass, and following Ford’s death in 1943, the original changed hands, finally being restored in 2010 by RM Restorations in Canada.

This incredible one-off was constructed in Italy in homage to the original Model 40 Special Speedster. The care with which the recreation of this iconic hotrod was undertaken is impressive, down to the smallest-but-most-perfected detail. Troy Ladd of Hollywood Hot Rods, no stranger to Robb Report, undertook its rebuilding. It is owned by Bruce Wanta of Washington.

It could be convincingly argued that Maserati invented the GT in the early 1940s with its Tipo A6 1500 Gran Turismo, a car meant for travel at speed across Europe’s highways and mountain passes. The travails of World War II protracted its debut until the 1947 Geneva Salon, where the Maserati appeared clothed in a fastback Pinin Farina body that looks modern even today.

The first serial-production Maserati road car prefigured greatness to come, but at the time, was itself a game-changer for the Italian luxury car industry, as Ferrari had only made its first car that same year. This particular vehicle, chassis No. 060, was one of 61 examples, and one of ten with factory-installed triple Weber carburetors atop its 1.5-liter, SOHC inline-six engine. Raced in 1949 and 1950 at the Coppa Intereuropa, where it took First in Class, Maserati’s lovely GT is now in the collection of Anne Brockinton Lee of Nevada.

Chosen as the 2022 Best of the Best Collector Car by the Robb Report editors, it was a treat to see the lilliputian Abarth sitting on the concours lawn alongside other cars, even the smallest of which were giants by comparison. The little Italian jewel started life as a show car, appearing at the 1953 Turin Auto Show as the “Fiat 1100 SS” wearing a voluptuous Ghia body wrapped around an Abarth 205 Competition chassis. Powered by an Abarth-juiced, 1,100 cc Fiat inline-four engine, the one-of-a-kind Abarth was sold at the 1954 New York Auto Show to Bill Vaughan, who envisioned a fiberglass version with a DOHC V-8 engine.

Vaughan’s pipe dream failing to materialize, the car was eventually discovered in 1982, residing in a Maryland barn and awaiting restoration. More recently, owners Bradley and Buzz Calkins of Colorado have brought the miniature masterpiece to the concours forefront in the United States and Europe, even taking Best of Show at the prestigious 2021 Audrain Concours in Newport, R.I. The Abarth 1100 SS is proof that miniscule dimensions and displacement are no barriers to greatness.

Winner of the Quail Octane Choice award, this Citroën prototype is as eccentric as it is endearing. We’ve often said that while the door handles of American, English, German, Italian or Japanese cars might differ in design, they will all be recognized as door handles and be situated on the door. A French door handle might look like a woman’s high-heel shoe and be placed on the car’s roof. Such is the charm of the French automobile.

This charmer was a factory design study called “The French BAT,” in reference to the Bertone concept cars on Alfa Romeo chassis designed by the mercurial Franco Scaglione. Different from any Citroën ever made before, it was shown at the 1960 Paris Motor Show, and decades on, recently discovered and restored with the guidance of its original designer, Guy Mismaque. Now 87 years old, Mismaque was elated to see it brought back to life—in the original orange color—and shown at The Quail, the first time it has been presented publicly since its debut in 1960. It is owned by Thomas Hale of Connecticut.

The car at The Quail we’d most want to take the keys and drive off in is also one of the rarest, and most lovingly restored. The story of Automobili Turismo e Sport in Bologna (A.T.S.) is deserving of a summertime’s reading project, but the abbreviated tale is that Giotto Bizzarrini and other out-of-work Ferrari ex-pats created perhaps the first mid-engined road car in the world. The body by Franco Scaglione was a masterwork, small but imposing in its balanced proportion. Powered by a 2.5-liter V-8 engine, only 12 examples were made between 1963 and 1965. Colorado car restorer Stephen Bell discovered this A.T.S. languishing in a garage three miles from his shop, with only 5,500 miles on the odometer.

One of three GTS models made, it was shipped to GM Design in Detroit shortly after manufacture, specifically to styling chief Bill Mitchell, who could likely not fit in the cockpit. After a decade, Mitchell sold the car to an employee, and it subsequently passed to Bell’s neighbor Steve Berry, who owned it for 45 years. Finally acquired by Bell, it has been fastidiously restored to such perfection that it deservedly took Best in Class, Post-War Sports 1961-1975 at this year’s event. Best in Show? If Robb Report were voting, absolutely.

Giotto Bizzarrini was the father of the Ferrari 250 GTO, the Lamborghini V-12 engine and, of course, the automaker Iso, whose Rivolta and Grifo brought Italian ingenuity and American V-8 muscle to bear on a series of racing and GT cars destined to make a big—if short-lived—splash in sports-car history. The long and convoluted Iso story is best circumvented here to arrive at this marvelous Grifo A3/C, one of ten original A3/L cars rebodied to A3/C specification in 2014 by a team of former Iso employees.

Indistinguishable from the original, it is accompanied by a title of Sanction II Continuation, and has been approved by Piero Rivolta, former head of Iso Rivolta. Looking back on Italian cars of the era, it’s hard to imagine a more beautiful shape than the A3/C. The work of the young Giorgetto Giugaro, it remains a masterpiece of its age. This car is owned by Michael Eckstein of Washington.

Not exactly a household name, Monteverdi was a Swiss carmaker whose founder, Peter Monteverdi, was reputed to be a descendant of Claudio Monteverdi, the great Italian composer. The Renaissance master’s descendent was a racer who founded his company in 1967 and built cars until 1984. Initially, the luxury sports GTs were cost-no-object models using big-displacement, 7.2-liter Chrysler V-8 engines and gorgeous Italian bodies, all assembled in Switzerland.

Initial collaboration with stylist Pietro Frua produced some exquisite models, but ended in quite the feud. Consequently, the Monteverdi High Speed 375 L—a long-wheelbase 2+2—is a unique reminder of a once-amicable relationship. According to its Quail custodian, the only other example was destroyed by Frua after the falling-out, and this sole survivor was last formally exhibited at the 1968 Geneva Motor Show. It is owned by Morton Street Partners and Andreas Wüest of New York.

Audi’s “sphere” concept cars offer a glimpse of what an automated, electric-powered personal vehicle might look like. Fundamental to the sleek design of the Grandsphere is its interior, which was in fact the point of departure in developing the car, whose exterior was dimensionally and aesthetically derived from an interior focused on comfort, safety and spaciousness.

Inside, natural materials and minimalist appointments provide a tranquil setting unlike the complicated cabins of most contemporary luxury cars. Envisioning the future of autonomous, premium mobility, Audi’s Grandsphere was exhibited on stage with the Skysphere (shown last year at The Quail), and alongside the brand-new Urbansphere, an SUV-like version of the concept line.

My favorite Porsche was a 1997 911 C4S, and for good reason. That car had all the great traits and none of the bad ones for which a 911 might pay penance. Nimble, light, powerful and built like a tank, the last air-cooled Porsche really did do it all. In the same spirit of the original, Gunther Werks has remastered the 993, taking a great car and creating an optimized air-cooled version built to race-spec standards.

Following on the heels of the Porsche 993 coupe and Speedster remastered by Gunther Werks, with 25 examples of each made, the 993 Turbo Remastered sets a new performance bar. Under its rear decklid, a twin-turbocharged, 4.0-liter Rothsport Racing–developed flat-six is responsible for 600 hp (or 700 hp in race mode), made more impressive by the car’s 2,700-pound weight. The all-new body in carbon fiber reveals incomparable fit and finish, and the bespoke interior offers a level of comfort and materials commensurate with Gunther Werks’ vision of the ultimate 993.

Encountering the fuchsia apparition on The Quail show field was as if we’d crested a hill and seen before us the open treasure chest of pirate dreams, so brilliant was the Hispano Suiza Carmen Boulogne. The name Hispano-Suiza dates back to 1904, when the Spanish company soon achieved worldwide acclaim as an automobile and aircraft manufacturer. By 1936, the Spanish Civil War shuttered operations.

In 2019, the marque re-emerged with an all-electric, 1,000 hp “hyperlux” concept—a term coined by the reborn Hispano Suiza (the new iteration dropped the hyphen). The Carmen Boulogne is not just remarkable because of its color, but because of its design. It references the one-off Hispano-Suiza H6B Dubonnet Xenia—inarguably the most beautiful Hispano-Suiza ever made, built in 1938 for the French pilot and race-car driver André Dubonnet. Referencing the past while adopting technology derived directly from current Formula E championship racing, the Carmen Boulogne will be limited to 24 examples.