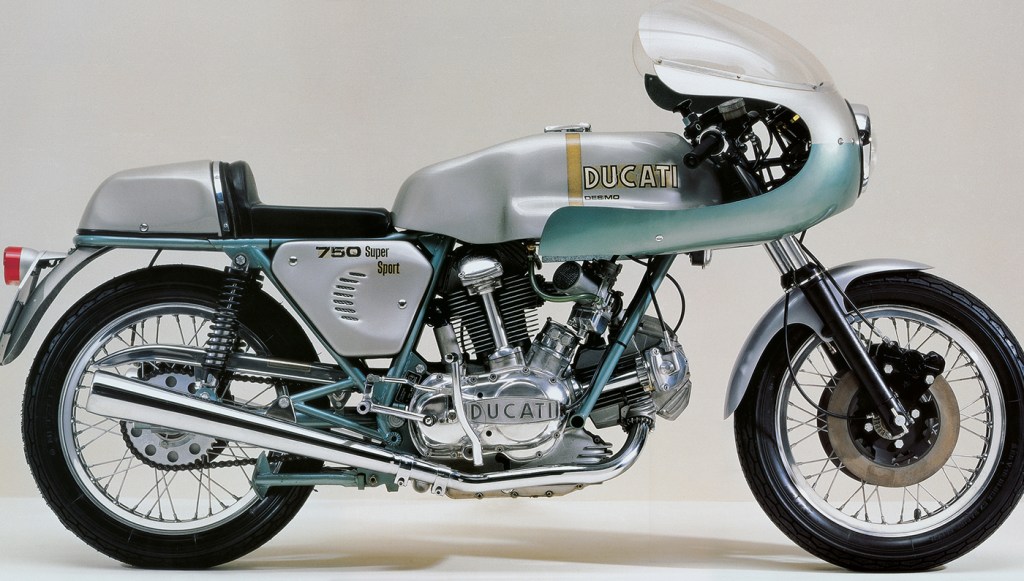 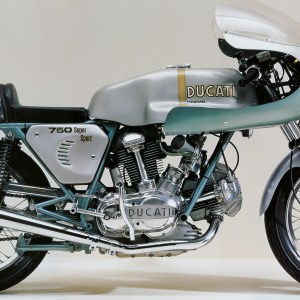 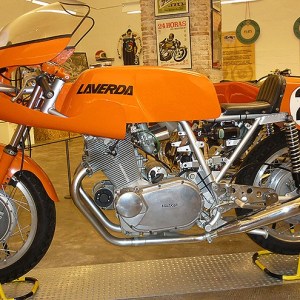 Ever since Ernest Michaux attached a steam engine to his father’s pedal-powered velocipede in 1867, motorized cycles have stirred the soul and symbolized freedom. With every subsequent decade, the quest to take motorcycle design farther in order to go faster has built on the breakthroughs of prior generations. Here are 10 of the most important motorcycles ever made—machines that accelerated power, performance, and artistry.

Produced by Birmingham Small Arms Company Limited (BSA) between 1938 and 1963, the hand-built Gold Star was named in commemoration of British racer Wal Handley’s more than 100 mph lap at the 2.75-mile Brooklands circuit in 1937. The feat had earned him a Gold Star pin and, as Handley was riding a modified BSA Empire Star model at the time, the manufacturer went into production on a new version fit with an alloy 496 cc engine and an Electron gearbox.

After WWII, the Gold Star was released as an all-alloy competitor available in various trim packages depending on purpose, including tourer, trials, International Six Days Enduro (ISDT), scrambles, racing, or Clubmans configurations. By 1956, the Gold Star DBD34 model featured a chrome-plated fuel tank, a 500 cc engine, and a top speed of 110 mph. Popular in both Europe and the United States, it triumphed at the Isle of Man Clubman Tourist Trophy and Daytona races, respectively.

From 1955 to 1960, the ultimate driving machine may have just been the BMW R69. Each of the 2,956 examples built featured a double-loop steel tubular frame, a 594 cc flat-twin, four-stroke engine, an enclosed 4-speed gearbox, and swinging-fork suspension in the front and rear. The 35 hp sport bike could reach a top speed of 103 mph.

The motorcycle’s refined performance and handling was matched by design and detailing distinctive to the marque. While overall sales at the time were not impressive, the R69 became a ubiquitous mount for law enforcement during the period.

Based on prototypes ridden to victory by Paul Smart (first place) and Bruno Spaggiari (second place) at the 200 Miglia di Imola in 1972, the 750 SS went on to further glory a few years later at the Daytona 200 with Cook Neilson. While only 401 examples of the bike were built in 1974 (the following year’s version was fit with a new “square-case” engine), the 750 SS was unmatched in its competition-specific character and remains one of the most iconic models from the marque.

A demon in the dirt, the Harley Davidson XR-750 has racked up more wins than any other bike in American Motorcyclist Association (AMA) race history. The XR-750 was designed as a successor to the marque’s KR model that was no longer competitive due to an AMA rule change on valve configuration in 1969. The replacement racer was developed with a steel double-loop, full-cradle frame equipped with an air-cooled, 748 cc V-twin engine. Suspension consists of a Ceriani telescopic front fork and two Girling shocks in back. Packing 82 hp, the bike could blast to 115 mph.

Introduced in 1970, the historic Harley perhaps became best known as the favorite ride of stunt star Evel Knievel, who relied on the model for many of his record-breaking jumps. As a tribute to both the bike and its rider, one of Knievel’s XR-750s is on display at the Smithsonian.

One of the most influential motorcycles of all time, the Honda CB750 created a serious dent in the competition when released and almost single-handedly caused the British bike industry to stall. It began production in 1969 as the homologation of the Honda CR750. The latter was developed in response to a rule change from the American Motorcyclist Association (AMA) that eased engine restrictions for race qualification, an adjustment that allowed the CR750 to win its inaugural race—the 1970 Daytona 200.

A high-performance powerhouse available to the public, the CB750 is considered by many to be the first superbike. Fit with an air-cooled 736 cc straight-4 engine, a 5-speed transmission, and front disc brakes, the earliest edition harnessed 67 hp and reached a top speed of 125 mph. With a production run through 2003 and again in Japan in 2007, over 400,000 examples were made. One currently resides in the AMA Motorcycle Hall of Fame.

The Laverda 750 Super Freni Competizione (SFC) was Moto Laverda’s thoroughbred stallion—the epitome of raw power, speed, and endurance. With an engine-building background that dated back to 1873, the Italian marque began motorcycle production in 1949. To compete with Ducati and the battalion of bikes from Japan and Britain, Laverda flexed its muscle with the 750 model in 1968, giving it an air-cooled, 744 cc parallel twin-cylinder engine. The following year, the 750 S variant was bolstered to 60 hp and finished fourth in the 24 Hours of Oss race.

Ready to make its mark, the next generation 750 SFC was fashioned with improved aerodynamics, including an upswept exhaust and the addition of a fairing. Painted orange, the speedster had the competition seeing red with its subsequent 24-hour endurance race wins in the Netherlands, Spain, and France in 1971. Destined to become a ’70s sensation, the 750 SFC made Laverda legendary.

Italy’s Moto Guzzi goes back to 1921, formed by Carlo Guzzi and Giorgio and Angelo Parodi. By 1935, Carlo Guzzi’s horizontal, single-cylinder engine propelled the company to multiple victories in the 1935 Isle of Man Tourist Trophy. The first to build a wind tunnel to test motorcycles in 1950, Moto Guzzi began to dominate racing during that decade, garnering eight World Championships and 11 Isle of Mann wins.

The 1960s saw a change in ownership as well as a new engine of choice. An air-cooled 700 cc V-twin with longitudinal crankshaft (and transverse cylinder heads on either side) was designed by Giulio Cesare Carcano and became the marque’s mainstay. In 1967, the V7 materialized and was equipped with Carcano’s 45 hp engine, a 4-speed transmission, and a suspension consisting of telehydraulic forks in the front and a swinging-arm setup at the back. Though no longer involved with racing at the time, the marque had a winner with the public and variations of the model continue to be manufactured.

Over three decades after World War II, Japan and Germany teamed up again, but this time to take over the motorcycle world. In 1979, Suzuki tasked the concept for a new bike to Germany’s Target Design team led by the former style chief for BMW, Hans Muth. The GSX100S Katana was a successor to the GS series that rose to prominence with victories in the Suzuka 8 Hours and Daytona Superbike in 1978 as well as first place finishes at the AMA Superbike championship the next two years in a row.

At the visual vanguard, a prototype Katana debuted at the Intermot Cologne motorcycle show in 1980 and caught immediate attention with its unique fairing, fuel tank, and seat integration for optimal aerodynamics. The production model, released the next year, featured an air-cooled 1074 cc DOHC transverse four-cylinder engine with 111 hp—enough for a top speed of about 136 mph. Named after a single-edged samurai sword, the Katana sliced through the industry’s staid design conventions with aesthetic and performance elements now brandished by many models.

When Kawasaki realized that the 750 cc bike they had originally been working on would not hold its own against the herculean 1968 Honda CB750, they developed the 903 cc Z1 in response. Produced in 1972, the bike featured a double tubular steel cradle that carried an air-cooled DOHC inline-four engine. Releasing 82 horses, the bike could gallop at a top speed of 130 mph while a 5-speed transmission served as bridle.

A synthesis of style and substance, the Z1 also offered an electric start, comprehensive instrumentation, and superior handling characteristics—an innovative combination of brute force and beguiling performance that set a new superbike standard.

“Made to retaliate and one-up the Honda 750, the Z1 was Kawasaki’s masterpiece,” says motorcycle and automotive consultant Robert Ross. “It is a hugely collectible bike.”

On a September day in 1948, spectators at the Bonneville Salt Flats in Utah witnessed a rather unusual ride. Atop a bike built by Vincent HRD and dubbed the Black Lightning, racer Rollie Free lay pronate while wearing nothing but bathing briefs (all for aerodynamic efficiency) and rocketed to 150.3 mph—a motorcycle speed record in the United States for the period. A marketable version of the machine was manufactured within the same year.

Billed as the “world’s fastest production motorcycle” by the British marque, the spine-framed bike bore an air-cooled 998 cc V-twin engine and a 4-speed gearbox. To smooth out the ride, girder forks with hydraulic damping at the front complemented cantilever rear suspension. Dressed with magnesium alloy components, it was also light, weighing only 380 pounds. And surging with 70 hp, the Black Lightning could bolt to a top speed of, you guessed it, 150 mph. Manufactured from 1948 to 1952, just 31 examples were made, but their impact on the industry was striking.