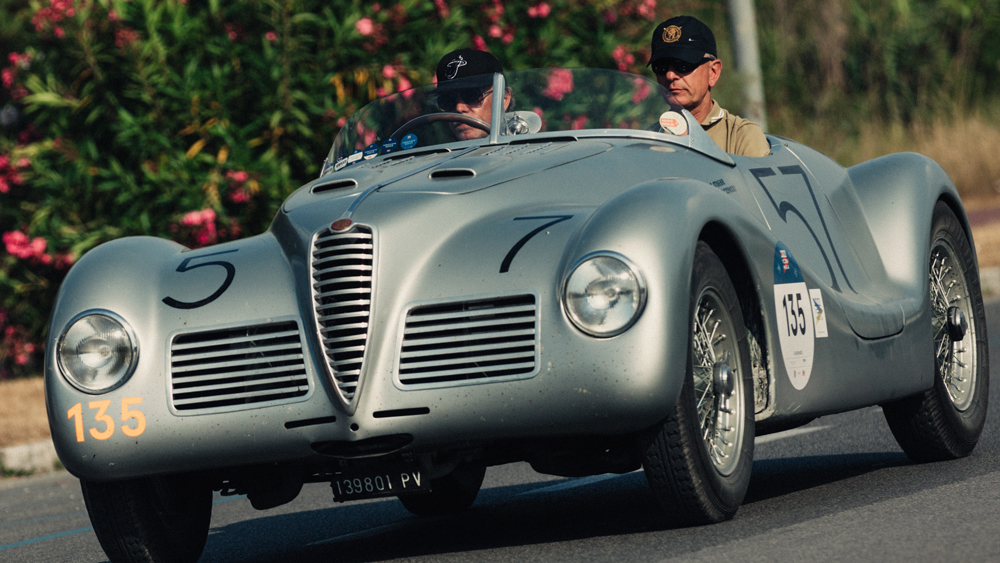 It’s often called the most beautiful race in the world, and along with the 24 Hours of Le Mans and the Indianapolis 500, it’s certainly one of the most famous in motorsport. Both the start and finish of the Mille Miglia, first held in 1927, was the Italian city of Brescia. The thousand-mile race through the countryside aimed for Rome and back on open roads run by unmodified production cars, most of which—including their drivers—bore Italian names.

The heyday of fierce competition saw the likes of Tazio Nuvolari, in his Alfa Romeo 6C, battling foreign competition. A year later, in 1931, German driver Rudolf Caracciola won the race with the overbearing Mercedes-Benz SSKL, a foreshadow of things to come on the world stage. Following wartime interruption, the race resumed from 1947 until 1957, when two crashes amassed so many fatalities that the competition was ended.

Perhaps the most famous race in history (sorry, Ford GT40 fans) took place in 1955, when the Mercedes-Benz 300 SLR (No. 722) driven by Stirling Moss—with navigator Denis Jenkinson—established a seemingly impossible 97.96 mph average speed. Renowned racer Juan Manuel Fangio arrived a few minutes later, late to the party. In all, 24 races were run. In 1977, the race was resurrected as the Mille Miglia Storica, an event admitting pre-1957 automobiles that range from Fiats to Ferraris, with plenty of non-Italian interlopers, just as in the glory days of the Mille Miglia. Here’s a look at a few notable entrants at this year’s edition through the lens of photographer Milad Abedi.

Founded in 1909, Bugatti introduced its first model, the tiny Type 13, the following year. Subsequently named “Brescia” for the factory’s victories at the 1921 Italian Grand Prix, it was succeeded by longer-wheelbase Type 22 and 23 models. About 2,000 Brescias were built between 1914 and 1926, and of these, the Type 23 was the most advanced. Its 1.5-liter, straight-four engine was at the leading edge for its day, proving its durability in competition and gaining a reputation for road-holding and speed.

The Alfa Romeo 6C, a model produced in seemingly infinite iterations from 1927 through 1954, was like a blank canvas for coachbuilders in Italy and beyond. But underpinning the variety of elegant bodies was a lightweight, high-performance car designed by Vittorio Jano, Alfa Romeo’s brilliant engineer whose double-overhead-camshaft, inline-six engine endured for decades, growing in displacement from 1.5 liters to double that by production’s end. It dominated the Mille Miglia during the late 1920s.

By the 1930s, Aston Martin was stretching its legs and fielding cars that gained respect in competition. Its Le Mans model, built from 1932 to 1934, was powered by a 1.5-liter inline-four mill that made a very respectable 70 hp and achieved about 85 mph. Long, low and with a distinguished radiator, it was offered in two wheelbases that allowed for open two-seater or four-seater bodywork. The former was perfect for a Mille redux. Only about 130 were made.

Many coachbuilt cars made by French automaker Delahaye epitomized the Art Deco style, but the marque, which spanned 1935 to 1954, was known for its competition cars as well. From its first year of manufacture, the race-bred Delahaye 135 CS used a 3.2-liter straight-six engine that made about 110 hp and achieved great success, taking second and third place in the 1936 Mille Miglia, and winning the 1938 24 Hours of Le Mans. And is any race car of its age as beautiful?

Long before its ubiquitous (at the time) model 2002, BMW was a manufacturer of limited-production machines in the spirit of its German counterpart Mercedes-Benz and so many other now-extinct sporting cars that failed to come out of the other side of WWII. Made through 1940, the BMW 328 was introduced at the Nürburgring circuit in 1936 and went on to a succession of more than 100 class wins in 1937. The next year, it took the RAC Tourist Trophy, the Alpine Rally and the 1938 Mille Miglia. The design of its 2.0-liter, straight-six engine, was “adopted” by British manufacturer Bristol after the war.

Before dismissing the diminutive Fiat as an ankle-biter within the ranks of Italian cars, it’s instructive to remind oneself that none other than Carlo Abarth and Ferruccio Lamborghini raced these tiny terrors in anger prior to becoming titans of Italian automotive industry. The 1100 was a continuation of Fiat’s prewar 508C, powered (such as it was) by a 1.1-liter inline-four engine. An exquisite miniature, only 48 were made before Bertone went on to forge a reputation—a decade later—with the highly successful Alfa Romeo Giulietta Sprint.

This Deutsch-Bonnet DB5 Spider is from 1945.  Milad Abedi

Like France’s aristocracy and art, its automobiles often have an origin as mysterious and complex. Deutsch-Bonnet was one of the nation’s automakers from 1938 to 1961, a partnership between Charles Deutsche and René Bonnet. Their vehicular offspring were lightweight competition cars like the Citroën-engined DB5, which competed at Le Mans in 1949 and 1950. With a central beam chassis and 2.0-liter engine, it was a fascinating and beautiful footnote in French racing history that, while not victorious, remains a beautiful and enigmatic relic today.

Introduced in 1939, the 6C 2500 Super Sport was Alfa’s top model. After the war, its construction resumed in 1946 and continued until 1952. Powered by a 2.5-liter inline-six engine, it was offered in a full range of models, from the elegant Touring-bodied Freccia d’Oro sedans to lightweight competition cars like the one-off Spider Corse bodied by Milanese coachbuilder Giuseppe Colli. Developing about 125 hp, it was a formidable performer, capable of achieving speeds of 120 mph.

Immediately following the war, Fiat produced some weird and wonderful cars like the racing variant of its 1100 road model, called the 1100 S. Designed in Fiat’s Carrozzerie Speciale department under the direction of Giuseppe Cogno, its aerodynamic, wind-tunnel-tested two-place body—called “Gabbone,” for hunchback—allowed the slippery bolide to reach 100 mph with only 50 hp from its 1.1-liter inline-four engine. Debuting at the 1947 Mille Miglia, it remarkably took second, third, and fourth place overall in 1948.

Established as a manufacturer in 1947, Ferrari was in full stride by the next decade. Successor to the model 166, the 195 was introduced in 1950 and really set Ferrari in motion. The GT was bodied by a litany of Italian carrozzeria like Michelotti, Ghia and Touring. Of the 28 made, a lone example wore sporting aluminum coachwork by Rocco Motto. Under the hood was a 2.3-liter, Colombo-designed V-12, which went on to power some of the greatest sports cars in history.

Click here to see all of the 10 Most Exciting Classic Cars We Saw at This Year’s Mille Miglia Storica.