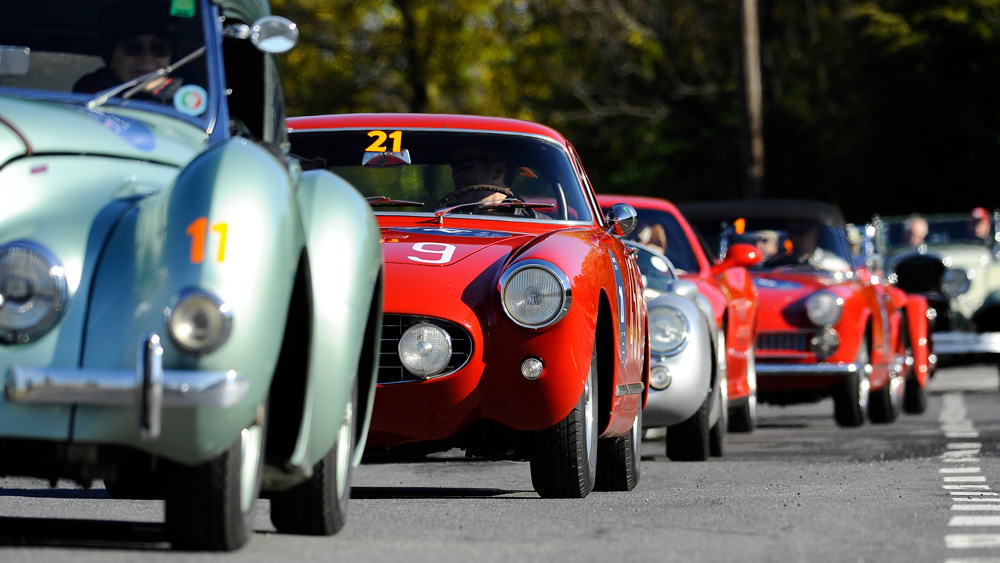 From October 23 through 26, Stateside car enthusiasts were given a taste of Italy’s esteemed road rally, the Mille Miglia, as a sample of it returned to the United States for the second year in a row. The 1000 Miglia Warm Up USA started in Middleburg, Va., with a checkered flag in Washington, D.C.

Not only is this a three-day haul covering 600 miles—compared to 1,000 miles in the Italian version—it is one that tests agility, performance and precision with a majority of the vehicles dating from 1927 to 1957. The jaunt is also an extreme assessment of mental acuity for the navigators, as the participant in the passenger seat is constantly following a detailed roadmap given to each team prior to start of the race.

This roadmap, featuring drawings of landmarks, must be followed in order to reach your next Time Stage, also known as a “CO” in the competition. It also indicates how many kilometers until your next turn. Unlike other racing fashions where drivers are competing for the best time, the 1000 Miglia calls for cars to reach their final CO at a time that is specific to each team.

For example, if a duo begins the race day at 8:43 a.m. they must reach the final CO at the end of by 7:43 p.m. or be deducted points based on how many minutes they are early or late.

During each day, there are also timed trials known as “PCs” sprinkled throughout the route. During these trials, you are given short driving courses that you must complete in the given amount of time specified in the road map.

The 1000 Miglia Warm Up was an opportunity to shed some light on the Italian rally in the case that it is not a traditional time trial or an event like any other. In the Italian version, the 1,000-mile event consists of many more challenging PCs as well as a shorter window to complete the mileage span needed to stay in the competition. Competitors at the Warm Up shared that the intensity of the European circuit is far beyond what this year’s US version was; however, since it is only in its second year, there is much more opportunity to expand and gain street cred for future editions.

Although this year’s Warm Up hosted a select few cars outside of the vintage date range, there were still qualifications that had to be met to enter. The weekend hosted 40 various cars in two categories. These included the 1,000 Miglia Era Class and the Post-1,000 Miglia Era Class.

Fall foliage in bloom along the route.  Photo by Roberto Deias.

The 1,000 Miglia Era Class saw vehicles built between 1927 and 1957. It also allowed sport and grand touring vehicles that were manufactured during those times. Taking first in this category were John and Julie Herlihy in a 1953 Jaguar XK 120 OTS Roadster. Among the models represented were the following:

In the Post-1,000 Miglia Era Class, vehicles from the year 1958 to present day were found, such as my ride, a 2002 Ferrari 575M Maranello. Victory was snatched from us, however, by Randy Simon and Sharon Stewart in their 1963 Lancia Flaminia Touring Spider. Others in our field included:

Although many of the drivers had been in the original European circuit, the 1000 Miglia sanctioning body divided the Warm Up into two additional categories for novice and veteran racers. Veteran racers were those who have competed in two or more 1000 Miglia races between 2013 and 2019.

Finishing up in the nation’s capital.  Photo by Roberto Deias.