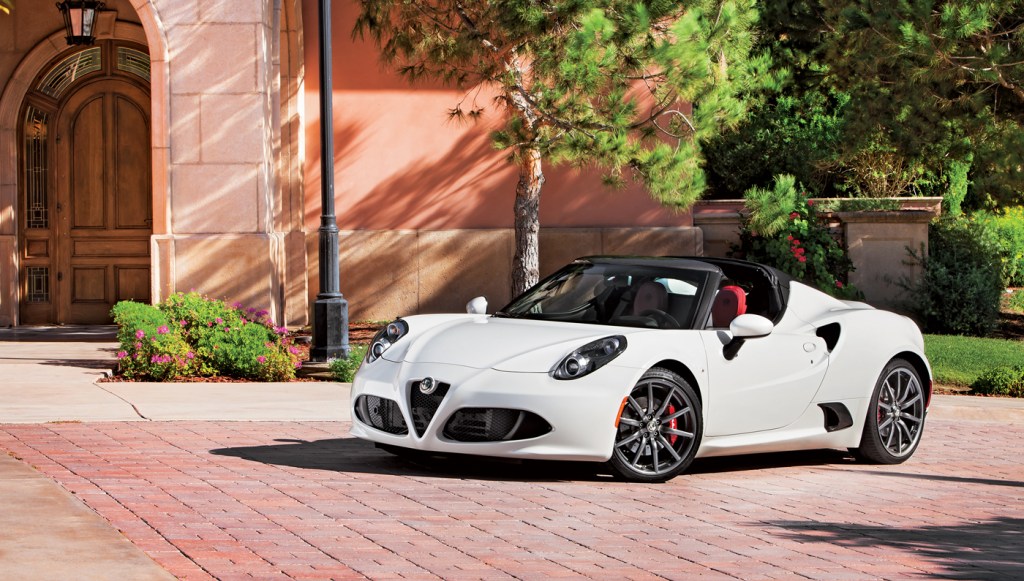 Pitting the 4C Spider against top-of-the-line offerings from Ferrari and Lamborghini was like throwing a top college player into the NBA All-Star game. The carbon-fiber roadster had no shot at dominating the contest, but it did score a few points. Najeeb Thomas called it “a ¾-size Ferrari, with all the same quirks,” and according to David Warner, “it’s tons of fun for the price.”

Inspired by the mid-engine 33 Stradale of the late 1960s, the 4C Spider displays the classic proportions and plunging V-shaped front grille that have characterized Alfa Romeo sports-car models of the past. Wanda Gierhart called it a “cute little car—retro Italian.”

The car’s power is modest, with a 1.75-liter turbocharged 4-cylinder engine producing only 237 hp and 258 ft lbs of torque, but it weighs only 2,487 pounds. With the optional race exhaust, the 4C Spider emits an ornery note, which Rudy Albers likened to the sound of a “Rottweiler with rabies.” Bret Morrison’s comparison was less flattering: He said the car sounded “like a leaf blower.”

Precise handling and mechanical steering allow drivers to feel connected to the road, with a ride that is firm but not overly stiff. Andrew Clark praised the 4C Spider as “fun, small, and responsive, like an amusement-park ride.” Donna Walker and Jonathan Ko both called it a “go-kart on steroids.”

“This car is the most entertaining ride of the bunch. No other vehicle puts the driver so close to the road—literally and in the sense that you feel every nook and cranny of the pavement.”—Bailey S. Barnard, RobbReport.com editor