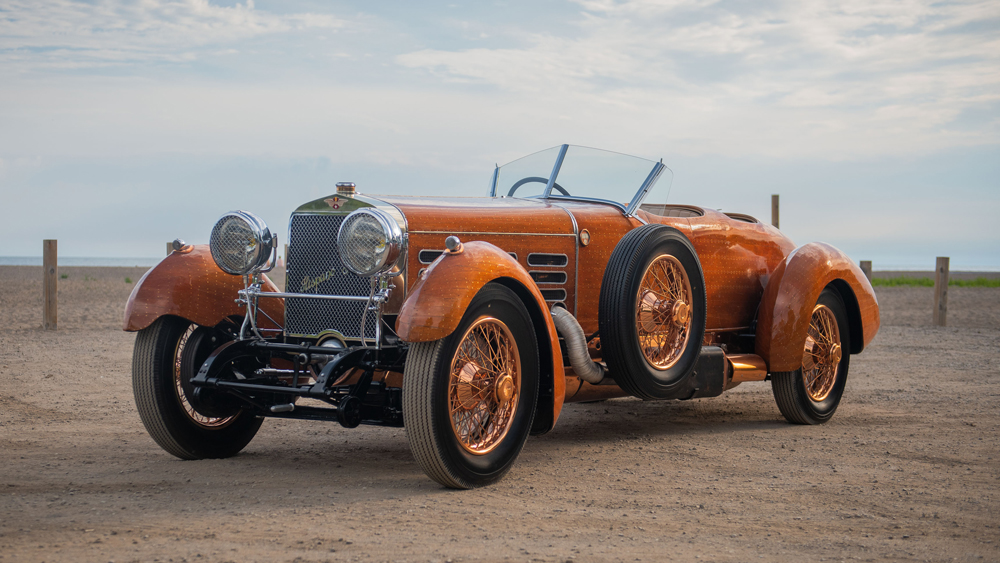 In the early days of the automobile, examples bodied in wood were hardly uncommon. In fact, wood was a natural choice, given that the craftsmen who made horse-drawn contraptions like wagons and coaches, and whose business evolved into car making, built most all of their conveyances in wood . . . wheels included. Metal soon became the favored material, as well-suited to volume stamping (think Ford Model T) as to handmade, bespoke commissions from the finest European and American coachbuilders. But wood still had its admirers, and probably the most well-known car—and certainly most beautiful—to wear a wooden body is the 1924 Hispano Suiza H6C Tulipwood Torpedo.

Founded in 1904, the Spanish automotive engineering company known as Hispano Suiza gained renown as a maker of luxurious, high-performance cars under the direction of Swiss engineer Marc Birkigt. Employing state-of-the-art technology with quality every bit the equal of Rolls-Royce, Hispano Suiza won races and attracted the attention of Spain’s King Alfonso XIII, who acquired more than two dozen examples over the years.

During World War I, the company provided more than 50,000 V-12 engines for Allied aircraft. Powerful and reliable, the engine became the basis for an inline-six mill—introduced in 1919 and made through 1933—that was essentially one half of the V-12 design. Advanced for its day, the 6.6-liter engine, called the H6, featured an aluminum head and block, a seven-bearing crank and shaft-driven overhead cam. It was eventually enlarged to 8.0-liter displacement with the H6C, in which form it developed about 195 hp, shifted by a three-speed transmission.

Using a ladder frame, the rolling chassis featured a power-assisted hydraulic drum brake system, an industry first that was so advanced it was even licensed to Rolls-Royce. Each Hispano Suiza was delivered as a rolling chassis to a client’s coachbuilder of choice. As a result, cars from the marque have featured stunning bodies from a variety of makers. The example offered by RM Sotheby’s during its annual sale in Monterey, Calif., from August 18 through 20, is justly famous, not just for its exquisite and unrepeatable body but because of its provenance and competition history.

The car is fit with Hispano Suiza’s 195 hp H6C engine, which is shifted by a three-speed transmission.  Darin Schnabel, courtesy of RM Sotheby's.

As heir to the aperitif and cognac fortune, André Dubonnet was one of the automaker’s most important customers. He was also a pilot and “gentleman racer,” like his contemporary competitor Woolf Barnato, who captured eight international records in an H6. Dubonnet had ordered his H6C so that he could compete in the 1924 Targa Florio, commissioning Nieuport, a French aviation company, to build a lightweight, torpedo-shaped body in tulip wood, its planks attached to an aluminum frame with thousands of brass rivets.

At more than 18 feet long, the Hispano Suiza is huge—just ten inches shorter than a new Rolls-Royce Phantom—but weighs less than 3,500 pounds, of which the body accounts for only about 160 pounds. A 46-gallon fuel tank and low-profile competition radiator made the Torpedo a purpose-built machine, which Dubonnet piloted to sixth place in the 1924 race, later competing in the Coppa Florio where he finished fifth overall and first in class.

Nieuport, a French aviation company, built the body from tulip wood, its planks attached to an aluminum frame with thousands of brass rivets.  Darin Schnabel, courtesy of RM Sotheby's.

Following its short racing career, the car was modified for road use, eventually with new fenders to complement the torpedo body, along with copper trim embellishing the design. Recently in the Blackhawk Museum in Danville, Calif., this unique and irreplaceable masterpiece is expected to fetch as much as $12 million.