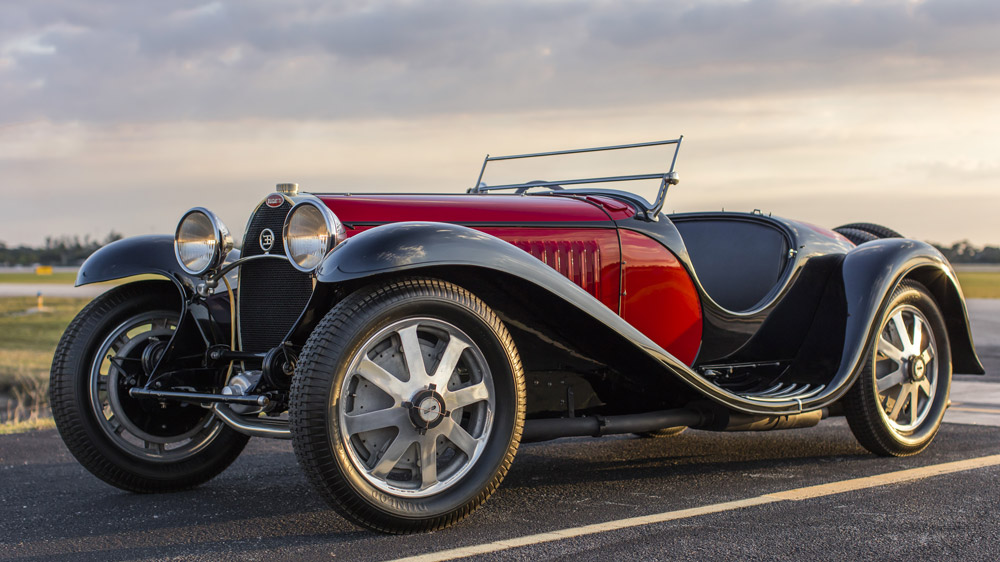 Dean S. Edmonds, Jr., a Boston University professor who passed away at age 93 in 2018, was a man who loved physics, planes and cars. Of the latter, the automobiles collected by Edmonds possess a beauty that, unlike college-level physics, most can relate to.

On March 5, a dozen cars from the Edmonds collection will be auctioned by Bonhams at its Amelia Island Auction, but the standout vehicle is a 1932 Bugatti Type 55 Super Sport Roadster. The stunning black-and-red machine had been in the professor’s stable since 1985. While there are a few other notable cars on the block from the collection — including a quartet of mid-century Jaguars, a stunningly rare left-hand-drive 1961 Aston Martin DB4 Series 4 GT and a simple dune buggy once driven by Steve McQueen—the Bugatti is something to behold.

The 1932 Bugatti Type 55 Super Sport Roadster being offered by Bonhams at its Amelia Island Auction.  Photo: Courtesy of Bonhams.

Commissioned by Nathaniel Mayer Victor Rothschild, scion of a fabled family known for its passion for Bugatti automobiles, chassis No. 55220 was one of only 38 Super Sports ever built and one of just 14 that bore the distinctive and elegant roadster coachwork designed by Jean Bugatti, the son of company founder Ettore. Of those 14, only 11 retain that original bodywork, making this car an exceedingly rare gem.

Jean Bugatti, who tragically died testing a car in 1939 at age 30, was just beginning to emerge as a new force at the Molsheim-based marque, influencing both design and engineering. What few examples of Jean Bugatti’s Type 55 magic still exist typically are enshrined in major car museums and private collections and rarely come up for sale, which explains Bonhams’ pre-auction estimate of between $6.5 million and $9.5 million.

Chassis No. 55220 was one of only 38 Super Sports ever built.  Photo: Courtesy of Bonhams.

Carrying a supercharged 2.3-liter eight-cylinder engine, capable of generating upwards of 180 hp, the Type 55 was a powerhouse in its day—a road-going version of Bugatti’s winning Type 51 Grand Prix car.

After a few years of spirited ownership by the 22-year-old Rothschild, No. 55220 would pass through a few other British hands before winding up for more than a decade with the family of H.B. Murphie. In 1985, the family decided to put the car up for sale at what would become a memorable London auction at Honorable Artillery Company.

And this is where our physicist enters the picture. Although a humble professor by day, Edmonds came from means and had already begun collecting cars when a friend showed him a flier advertising the Bugatti’s upcoming auction across the pond. Edmonds was stunned; he had been passionate not just about the marque but also this specific Type 55 Roadster, which he had carefully followed through a string of owners in the pre-Internet age. According to articles and recollections sourced by Bonhams from Edmonds, the professor promptly booked a roundtrip flight on the Concorde supersonic jet so as not to miss the event in London, making sure his return flight got him back to Boston in time for Monday’s lecture.

Some pre-auction estimates had surmised the rare Type 55 would fetch as much as £100,000. The estimates were way off, much to Edmonds’ chagrin. In the end, his winning bid was for £440,000, far more than the record-setting £270,000 someone had paid a year earlier to land the famous Barnato Gurney Nutting Speed Six “Blue Train” car.

Following the epic purchase, some in the collector car word predicted that Edmonds was sure to bury the car in his collection. The professor quickly rebuffed such notions, telling British magazine The Automobile: “Nothing could be further from my mind than making this car an exhibition piece without oil in its sump and tires that never roll on tarmac. Quite the contrary, I am a lover of engines in particular and machinery generally, and would consider it most disappointing to limit myself looking upon this car as no more than a piece of sculpture.”

Edmonds would stay true to his word for the next 35 years. After a sympathetic restoration, the owner of No. 55220 made sure it greeted fans on both genteel lawns and rugged roads alike. This Bugatti took first-in-class honors at Pebble Beach in 1993, and the very next year was run in both the historic Mille Miglia race as well as the International Bugatti Rally. Other appearances followed before the car and its passionate owner both began to slow down in recent years. When the hammer falls at Amelia Island, one can only hope this Type 55’s next caretaker will take possession in the same generous spirit of Dean Edmonds.