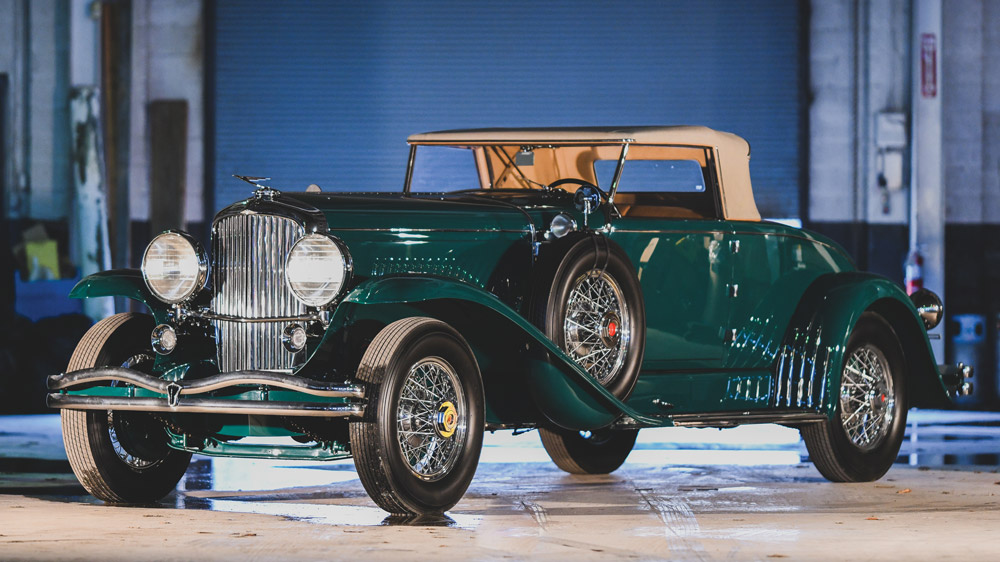 With the passing of each season, the collector car market continues to evolve, as evidenced by a slew of contemporary supercars that will be offered for sale as part of various Amelia Island auctions during the first week of March. Even though modernity is trending upward, established collector car categories, including prewar classics, are still in demand and will be well represented when the leading auction houses venture out to Florida’s northernmost coast in early March.

In that regard, RM Sotheby’s is offering six vehicles from the private collection of Keith Crain—a respected publisher (and collector) within the automotive industry. Of those highly desirable collector cars, four were built during the 1930s and three of them could command seven figures.

Headlining the group is a 1932 Duesenberg Model J Convertible Coupe, one that was expertly restored in the mid-1990s and retains its original Murphy-bodied coachwork.

The car was expertly restored in the mid-1990s.  Photo: Courtesy of RM Sotheby's.

Offered without reserve (as are all of the Crain-consigned vehicles), this Model J Duesy could fetch as much as $1.8 million, according to Gord Duff, RM Sotheby’s global head of auctions. “It goes to show that he believes in the market and believes in us as a company,” Duff says of Crain’s commitment to sell this Duesenberg without reserve. “If you’ve ever wanted one, you better pay attention, because it will be sold when the gavel comes down.”

Plenty of collectors have wanted a Cadillac Sport Phaeton, too, since the company only built 85 examples for the V-16 chassis over a two-year period during the early 1930s. Crain will be consigning his, a 1930 Cadillac V16 Sport Phaeton, which previously belonged to Otis Chandler, one of the industry’s most revered collectors. “Anyone who’s been around for 15-plus years in this world, they know of Otis Chandler and known that he only had best-of-category cars,” says Duff. “If I know that a car came out of his collection—even before I see it—I know it’s going to be a pure car in terms of history and a best-of car in terms of its restoration.”

The 1930 Cadillac V16 Sport Phaeton, one of only 85 examples built.  Photo: Courtesy of RM Sotheby's.

Duff also notes that this particular example could sell for $1 million, in part because that restoration overseen and commissioned by Chandler more than two decades ago is as complete and spectacular as any that could be done. “He only had top restorers work on his cars, and when you have those top restorers, it could be restored 30 years ago but it might still look like the work was done last year.”

It’s not every day that a late-production Bugatti Type 57C crosses the auction block without a reserve, but that’s exactly what will happen when a 1939 Bugatti Type 57C Stelvio highlights the second day of the RM Sotheby’s sale. Of all the components and features on the car, the most noteworthy—according to Duff—is the windshield. “It’s almost something that I would have to point out to you,” he says. “If the windshield was straight or on a 10-degree angle versus the 30-degree angle that it’s on, it would make a huge difference in the car’s appearance.”

This 1939 Bugatti Type 57C will cross the auction block without a reserve.  Photo: Courtesy of RM Sotheby's.

That angled windshield could also make a huge difference in determining the car’s value, which RM Sotheby’s projects will fall between $800,000 and $950,000. “It’s hard to imagine,” says Duff, “but the windshield being straight versus being on a slant can change the value by at least 30 or 40 percent.”

The most affordable prewar classic offered from the Keith Crain collection, a 1934 Packard Twelve Convertible, is anticipated to sell for $350,000 to $400,000 and, as Duff acknowledges, represents a great entry point to the classic car hobby for those with the means.

“This a best-of from one of the best years that Packard had,” says Duff. “It’s great value for a mid-level car for a new bidder that wants to get into collecting.” The RM Sotheby’s Amelia Island auction will take place March 6 and 7.