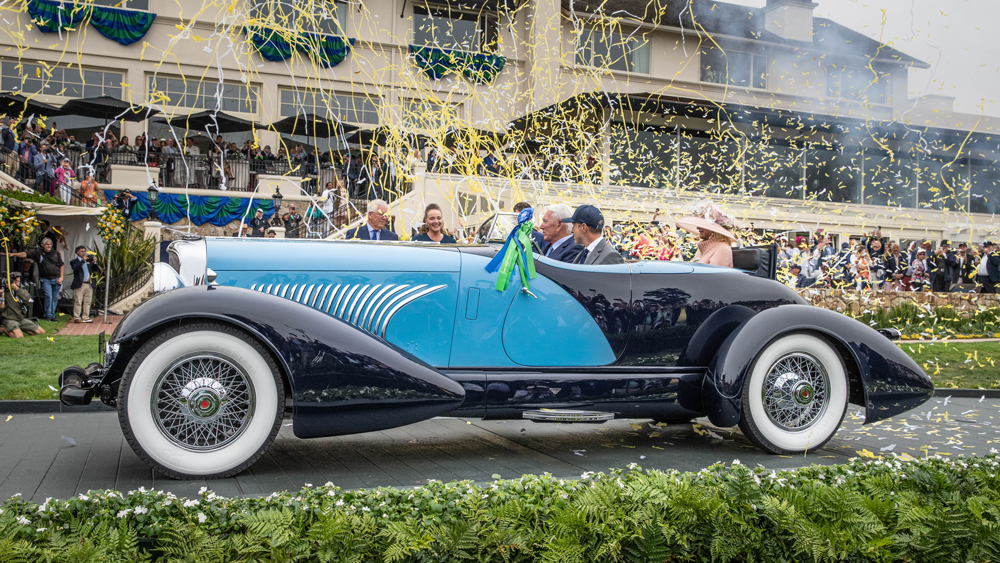 Every renowned golf venue in the world has its vaunted traditions; Augusta with The Masters, St Andrews and the British Open, but for Pebble Beach, the top-ranked and revered public course in the United States, its legacy is equally tied to a very different game. Near the end of summer each year, among the most avid car collectors and restorers in the world drive for show, positioning themselves on the final fairways as part of the storied Pebble Beach Concours d’Elegance, an automotive contest that played through beautifully again yesterday.

By day’s end, the confetti fell on a stunning 1932 Duesenberg J Figoni Sports Torpedo, owned by Lee R. Anderson Sr, of Naples, Fla. But a lot transpired prior to that much-anticipated moment. Many ardent car enthusiasts, whether first time attendees or die-hard veterans of the concours, arrive before sunrise in what has become known as Dawn Patrol in order to catch the competing automobiles motor onto the lawn and take their own respective spots. It’s a chance to see the gallery-worthy sheet metal in motion, though motivation also takes the form of Hagerty’s commemorative hat, different each edition, handed out surreptitiously for a very brief window and that fuels its own unique spirit of competition.

This year, the field comprised more than 200 cars divided into 28 classes that ranged from Antique to American and European Classics to several marque-specific and commemorative categories. The latter featured tributes to the 100th anniversary of Lincoln as well as that of the 24 Hours of Le Mans, with winning examples from both that included a V-8-powered 1928 Lincoln L Holbrook Fully Collapsible Cabriolet, belonging to Bill and Dee Kuettel of Capitola, Calif., and a V-12-powered 1932 Lincoln KB Murphy Dual Cowl Phaeton, owned by Beth and Ross Myers of Boyertown, Pa.

The 100th anniversary of the 24 Hours of Le Mans was celebrated this year at Pebble.  Tom O'Neal, courtesy of Rolex.

The Duesenberg crowned Best of Show, a title that elevates provenance and value exponentially, was given its breathtaking bodywork by famed coachbuilder Joseph Figoni and was entered in the 1932 Paris-Nice Rallye. It was also an in-period winner at a car show in Cannes. Although not always the case, the car now wears its original coachwork, which obviously not only impressed the judges but was a crowd-pleaser as well.

Yet it wasn’t just the classics that garnered attention. As per usual, the Concept Lawn in front of the lodge was barely visible due to the crush of photographers and admirers trying to get eyes on the latest dream machines from the likes of Koenigsegg, Genesis, Hennessey and Lamborghini, among others. Lincoln’s new L100 Concept stood out, as did Hennessey’s Venom F5 Roadster and Czinger’s 21C hypercar. There was one model, though, that set itself apart, literally, seen only by visiting the Bugatti pavilion—the 1,600 hp Bugatti Mistral, a topless titan inspired by the 1934 Bugatti Type 57 Roadster Grand Raid and built on a thoroughly revised Chiron tub.

“This is the last time we’re going to put a W16 8-liter engine into any road-going car, so we wanted a last-time celebration of that power plant,” says Frank Heyl, deputy design director for Bugatti, while giving Robb Report a tour around the vehicle. “So we decided to do an open-top car as it was on our bucket list anyway.”

The challenge was giving something with that much power, the proper support. “If you take a Chiron monocoque and you shave the roof off . . .the torsional rigidity is gone,” says Heyl. “So we needed to reengineer the entire tub, and it cost us an arm and a leg. We could never before really calculate the cost into a business case that would work until we now have the Divo in the market, the Centodieci, the La Voiture Noire and the Bolide. We’ve opened up a new segment within our own segment, and that’s one-offs and few-offs.” The Mistral will be limited to 99 examples, each with a starting price of more than $5 million.

Although the automakers don’t have the same level of commercial presence as they do at The Quail, A Motorsport Gathering, held two days before in Carmel Valley, the manufactures do let their presence be known through elaborate hospitality suites and settings for VIP clients and invited guests. The Lamborghini Lounge and Bentley House, for example, both comprise picturesque residences flanking the fairway.

Aston Martin maintains an elevated stage, steps away from the cars, where it displays its latest debuts like the V12 Vantage Roadster and DBR22. Then there’s the Mercedes-Benz basecamp, situated right at the heart of the Lodge at Pebble Beach and directly above the judges’ platform, a placement that seems fitting for the world’s oldest automaker and one they have claimed for more than two decades.

Tom Kristensen, nine-time winner of the 24 Hours of Le Mans, was one of the honorary judges this year.  Tom O'Neal, courtesy of Rolex.

And while, at first glance, all the big hats and prodigious horsepower may seem an exercise in excess, the event drives a greater good, with $2.7 million going to 90 charities in the region this year alone, bringing the total to $32 million raised over the past 72 years that the concours has been running. The concours remains a cherished tradition that Pebble Beach and the global automotive community continue to embrace, and will do so again next year on August 20.