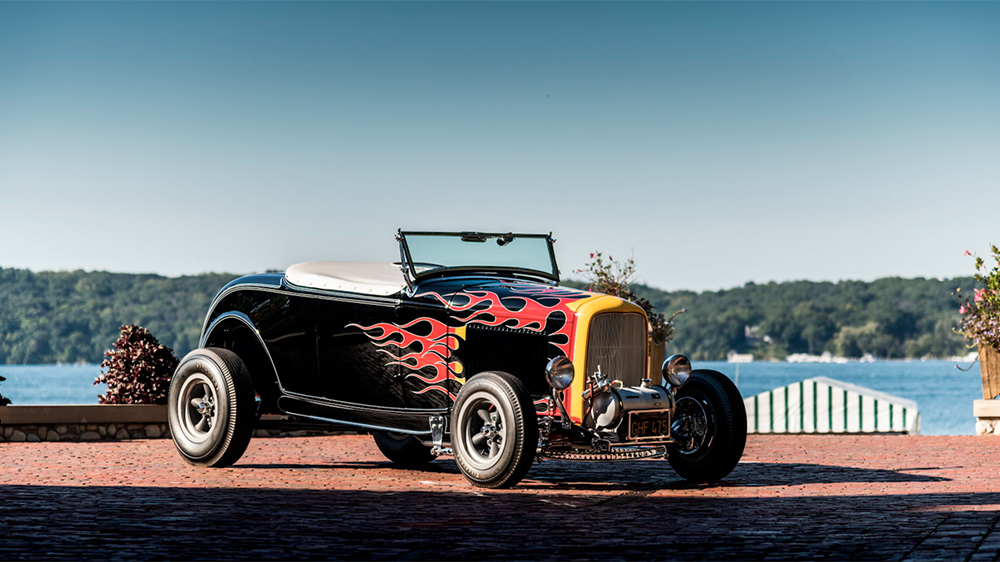 When someone uses the word “hot rod,” chances they are talking about the 1932 Ford McMullen Roadster, whether they know it or not. From the classic open-top silhouette to its iconic and much-copied flamed paint job, the vehicle epitomizes everything we’ve come to expect from the American hot rod. Now, the car most responsible for the genre—and without a doubt the most visible rod of all time—is up for sale.

Later this week, Mecum Auctions will make the eye-catching classic car available for purchase as part of its Indy 2020 sales event. The vehicle will be part of the Mecum Gallery Exposition sale and is sure to go for exponentially more than the $5,000 it sold for back in 1970.

The 1932 Model A that the roadster is based on was first purchased by its namesake, the late auto enthusiast Tom McMullen, back in 1958. And in true hot rodder fashion, he immediately ripped out its 283 cubic inch V8 and replaced it with a heavily modified 352ci Chevy V8 with a six-barrel carburetor lay out. But McMullen didn’t stop there. He would go on to tweak the engine setup during his dozen years with the car. Eventually he would add a GMC 4:71 supercharger with dual four-barrel carburetor and a Moon Eyes aluminum fuel tank before selling it to help fund his business interests, which included a burgeoning hot rod publishing empire.

As impressive as the vehicle’s powertrain may be—at one point, the car was the world’s fastest street rod thanks to its 167-mph top speed—the McMullen roadster is known mostly for its bad-ass looks. McMullen had the roof chopped off, its curving fenders removed and its ride stance lowered. But the most notable modification are the yellow and red flames that were painted on the front of the car. Those curling flames, which were the work of American artist and cartoonist Ed “Big Daddy” Roth, and some subtle pin-striping by McMullen himself are the reason why this car has been featured on countless album and magazine covers over the years. The car was also part of the Pebble Beach Concours d’Elegance’s inaugural Hot Rod class in 2007.

The 1932 Ford McMullen Roadster will be available for purchase between July 10 to the 18 at the Indiana State Fairgrounds. It’s one of 18 “investment grade” vehicles included in the Mecum Gallery Exposition sale. Each vehicle can be directly purchased from the auction house and will not go up for bid. No pricing information was made available, though you should expect to plunk down a pretty penny to own this classic.