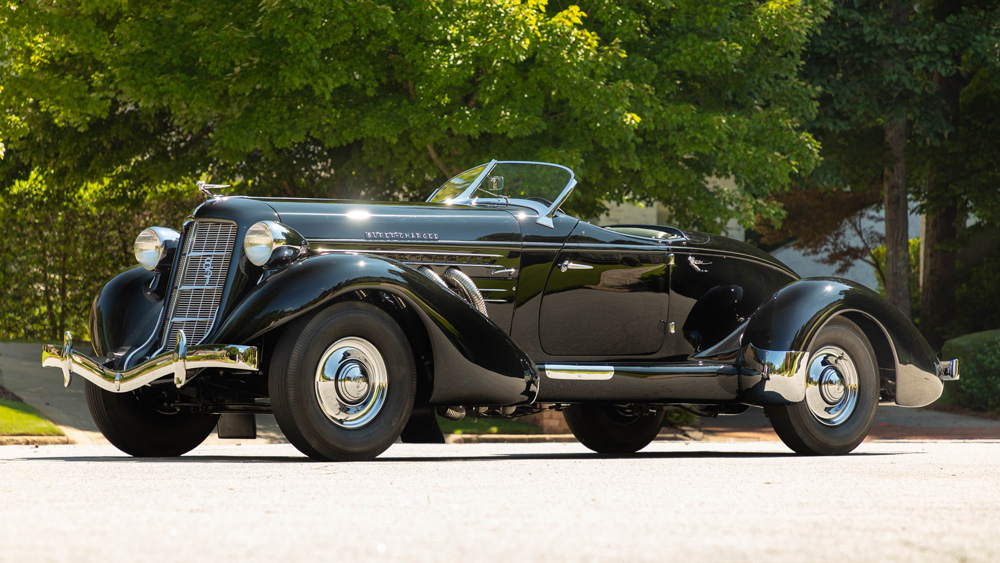 The Antique Automobile Club of America’s annual Hershey Car Show is back this October, and with it comes its official auction, the 15th annual RM Sotheby’s Hershey sale, held at the Hershey Lodge in Hershey, Pa., on October 7 and 8. The event—and sale—promise to be of particular interest to lovers of classic automobiles that go all the way back to the Brass Era (1896 through 1915). An unquestionable star car on offer doesn’t hail from the Brass Era, however, but rather, is from one of America’s most notable, design-conscious and opulent automotive period a couple of decades later. That A-list automobile is a 1935 Auburn 851 Supercharged Speedster.

Auburn remains one of the most celebrated marques of the prewar era, and among the three most heralded American carmakers of the 1920s and 1930s—the other two being Cord and Duesenberg. The Auburn Automobile Company grew from the Eckhart Carriage Company, founded in Auburn, Ind., in 1874. By 1926, Errett Cord owned Auburn and, after partnering with the Duesenberg Corporation, launched the Duesenberg Model J, America’s most exclusive automobile at the time. 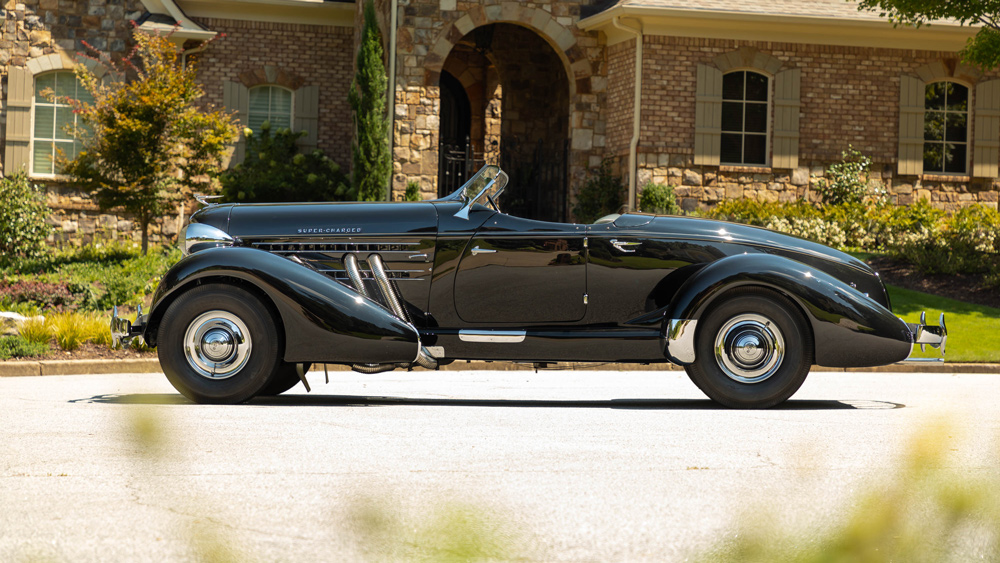 RM Sotheby’s will present this 1935 Auburn 851 Supercharged Speedster at its Hershey auction in October.  Photo by Alex Stewart, courtesy of RM Sotheby's.

Auburn, Duesenberg and Cord were known for building beautiful, luxurious and expensive machines. Perhaps the most sporting was the Auburn 851 Speedster, designed by Gordon Buehrig, well known for his innovative front-wheel-drive Cord 810/812 models. Icons of an ambitious age, all three related marques came to an end in 1937, a result of the lingering Great Depression and owner E.L. Cord’s brush-up with the US Securities and Exchange Commission. 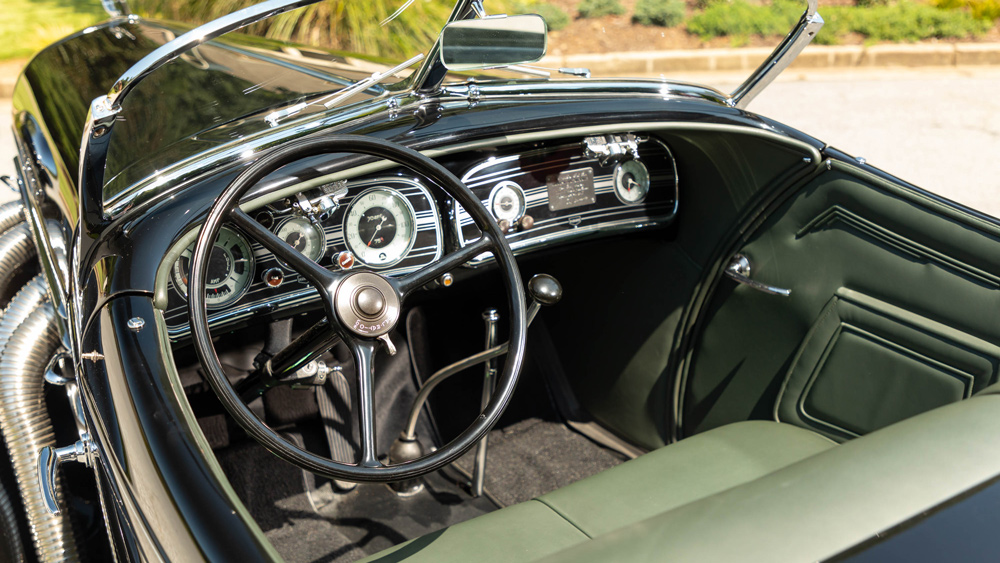 Gear ratios can be changed between two settings (high and low) with a switch on the middle of the steering wheel while the vehicle is at, or nearly at, a full stop.  Photo by Alex Stewart, courtesy of RM Sotheby's.

The first Auburn Speedster, from 1925, earned the name from its straight-eight engine, a 4.8-liter side-valve design developing 68 hp. By 1930, output was up to 125 hp. The 851 Speedster, however, was a transformational design that was equally elegant and sporting, and looked nothing like its predecessors.

Few cars were more progressive for the time than the 851 Speedster, which featured the iconic “boattail” styling cue that has been a leitmotif of cars like the Corvette C2 series coupe and the Buick Riviera, a rather unfortunate-looking model built from 1971 through 1973. The 851’s engine, reduced in displacement to 4.5 liters, develops 150 hp, allowing the sleek convertible to top 100 mph, the first American production car to do so, uninterrupted, for 12 hours. 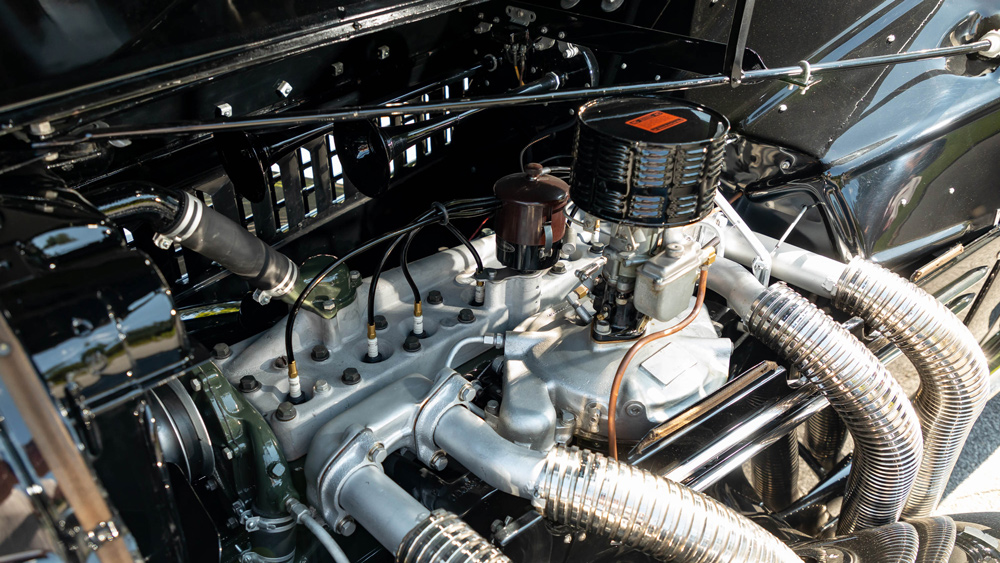 Underneath the curvaceous bodywork were some of the more advanced technical features of the day, including a supercharger and a Columbia dual-ratio rear axle that effectively provided six gear ratios from the three-speed synchromesh gearbox. 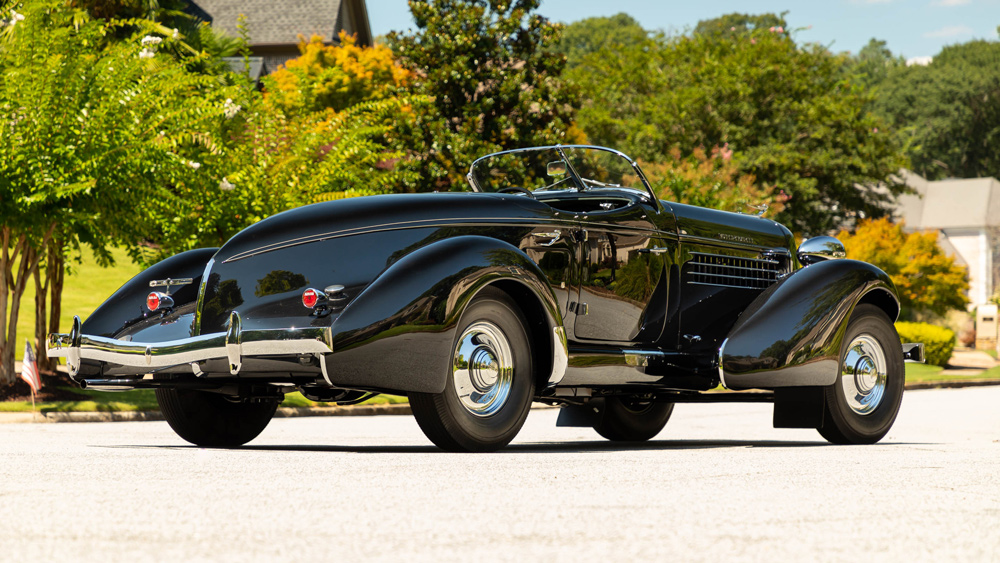 Iconic “boattail” styling is a signature design cue of the 851 Speedster.  Photo by Alex Stewart, courtesy of RM Sotheby's.

Made until the marque ceased production, Auburn’s 851 Speedster was the high watermark of the company’s output. The exquisite black car on offer is one of only about 150 examples produced between 1935 and 1936. Offered from the collection of Robert Thayer, it was awarded Best-in-Class at the 2011 Amelia Island Concours d’Elegance. The vehicle is estimated to fetch as much as $900,000 when it crosses the block.