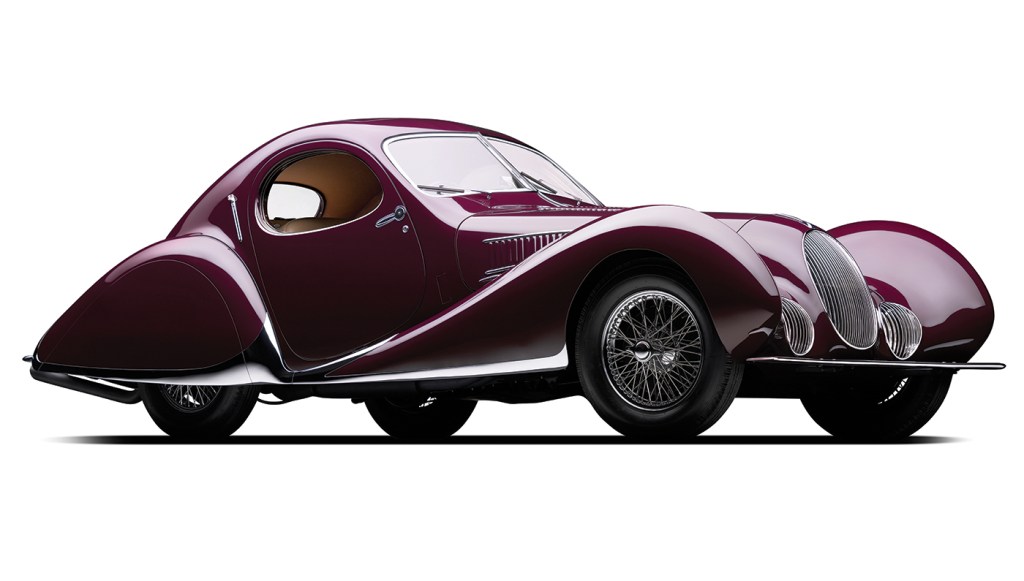 With a name as long as its list of accolades, the finest show car in the world may just be the 1937 Talbot-Lago T150-C SS Coupé aérodynamique ‘Goutte d’Eau’, Figoni & Falaschi that earned the Peninsula Classics Best of the Best Award. The classic coupe (chassis No. 90106), which received the prize on August 17 as part of Monterey Car Week in Carmel-by-the-Sea, Calif., is owned by renowned collectors Peter and Merle Mullin, founders of the Mullin Automotive Museum.

Representing the brilliance of bygone coachbuilders from the prewar era, the vintage vehicle was manufactured by France’s Talbot-Lago marque and provided its art deco–inspired body style by Giuseppe Figoni and Ovidio Falaschi. Designed to resemble a water droplet (goutte d’eau), the car cuts through the air powered by a 4-liter, 6-cylinder engine (with three carburetors) generating 140 hp and enabling a top speed of about 100 mph. The power train also includes a 4-speed Wilson preselector transmission. The T150-C SS had a production run of less than 30 units constructed and was the touring variant of the racer that swept the top three finishes at the 1937 Tunis Grand Prix and won the Royal Automobile Club’s (RAC) Tourist Trophy in Britain the same year.

The exquisite Talbot-Lago is the first car to win the Peninsula Classics Best of the Best Award as this year marked the event’s premiere. The contest, sponsored by the Peninsula Hotels group, culled six of the world’s most acclaimed concours winners and invited them to be judged by a panel of 24 industry insiders and respected car connoisseurs. Among those tasked to decide were Fabio Filippini, design director for Pininfarina; auto historian Adolfo Orsi Jr.; fashion mogul Ralph Lauren (who has an incredible personal collection); and celebrity car buff Jay Leno. All seemed in agreement with Peter Mullin’s description of his entry as a “sculptural example of rolling art.” (peninsula.com)