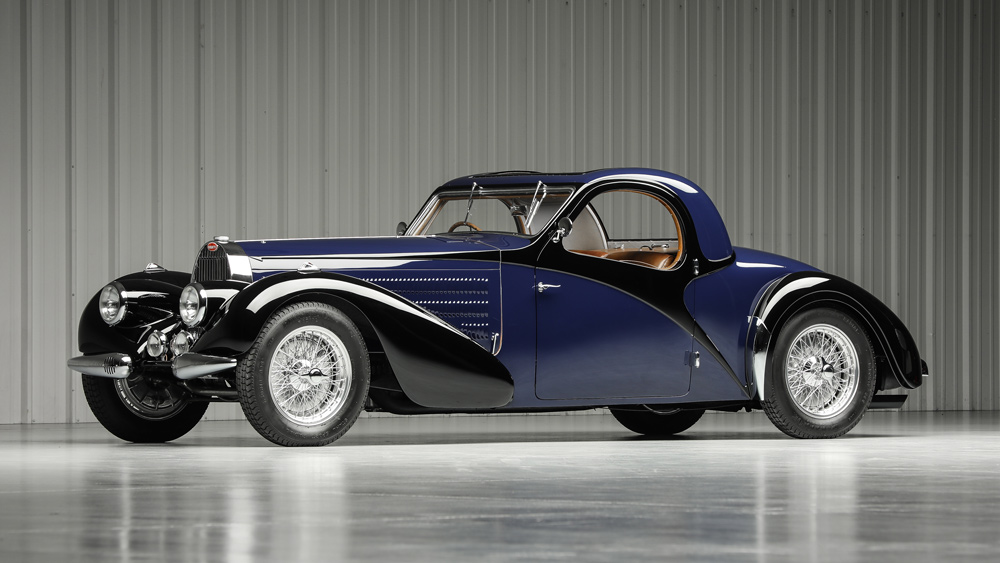 Worldwide Auctioneers will roll out some heavy automotive artillery for its upcoming 14th annual Auburn Auction at its headquarters in Auburn, Ind. The two-day sale, on September 3 and 4, includes a suite of 31 Packards, a rare Isotta Fraschini and a Miller-Gulf racer. But the 1938 Bugatti Type 57S Atalante Coupé stands out for its beauty, authenticity, provenance and show-winning credentials.

Bugatti‘s bygone-era model wears an early Atalante body, by French coachbuilder Gangloff, that’s at once sporting and classically proportioned, with a long hood, sweeping fenders and a compact cabin. Bugatti historian David Sewell has extensively documented this car, chassis No. 57641, which has resided in significant French collections, including that of Henri Novo and the Schlumberger Art Collection in Paris. Following a frame-up restoration, the vehicle was awarded Best in Class at the Pebble Beach Concours d’Elegance in 2016. 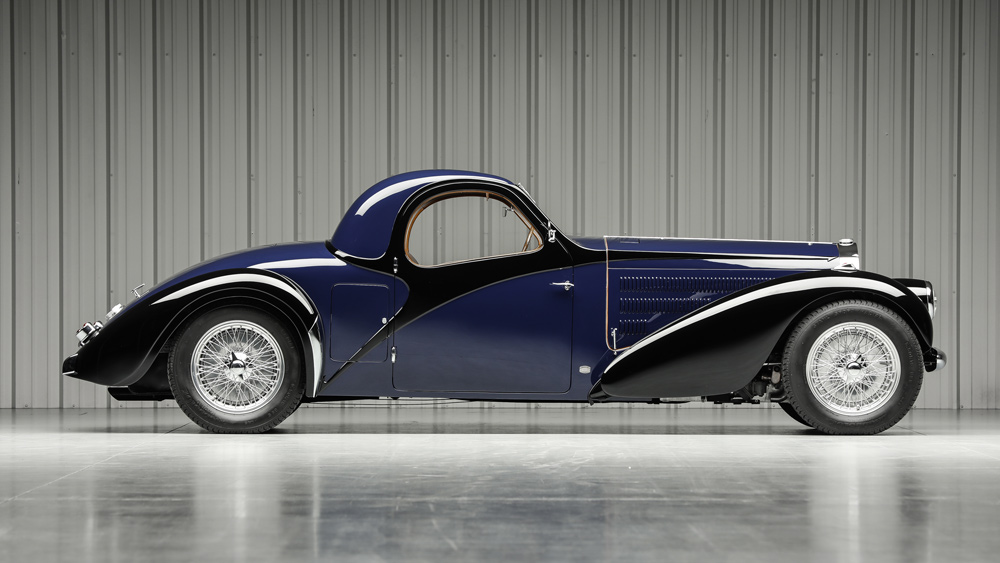 At the time of the Bugatti Type 57’s manufacture, from 1934 to 1940, the model represented the pinnacle of technological advancement for the revered automaker. Designed by founder Ettore Bugatti’s son Jean, the Type 57 included S and SC variants—Surbaissé for “lowered” and Compresseur for “supercharger”—and featured a low-slung chassis. A total of 710 examples of the Type 57 were made, dressed in a variety of body styles. The Type 57S and 57SC Atalante, of which only 17 were produced, wear two-door coupé bodywork and were named for Atalanta, a heroine of Greek mythology. They are regarded as among the most beautiful of all Bugattis, evoking speed and expressing the graceful spirit of Art Deco style. 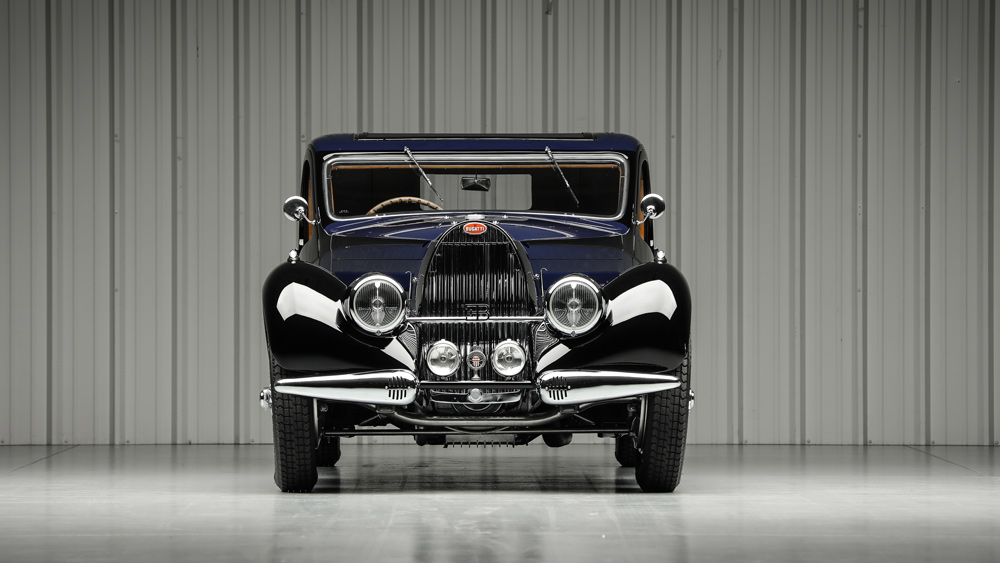 Chassis No. 57641 has resided in significant French collections, including that of Henri Novo and the Schlumberger Art Collection in Paris.  Photo: Courtesy of Worldwide Auctioneers.

They were advanced as well, with a 3.3-liter inline-eight engine using twin-overhead cams and developing 160 hp at 4,500 rpm. Such lofty numbers resulted in a 120 mph top speed at a time when most automobiles struggled to crest 50 mph. Shifting was via a four-speed gearbox, and the chassis featured a beam front axle with semi-elliptic leaf springs, a live rear axle with reversed quarter-elliptic leaf springs, front and rear De Ram shock absorbers and four-wheel hydraulic finned drum brakes. With these technical underpinnings, the Type 57 served Bugatti well, setting numerous world records—beginning in 1936—and achieving victory at the 24 Hours of Le Mans in 1937 and 1939. 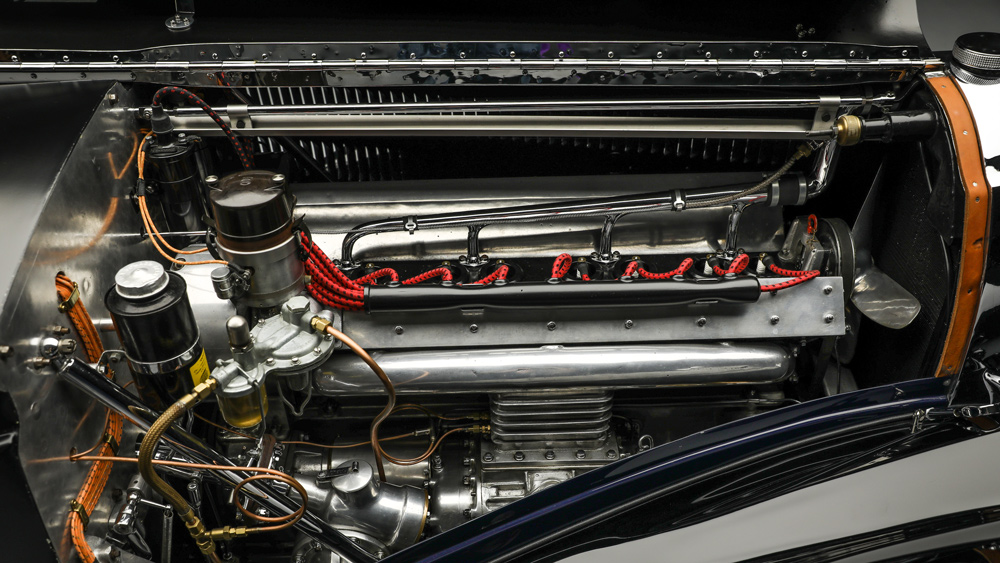 The provenance of chassis No. 57641 stretches back to a factory invoice, for French customer Monsieur Baptifaut, that’s dated November 15, 1938. The car next passed to the Joussy family in 1951 and was cited in The Bugatti Book, published in 1954 to commemorate the 25th anniversary of the Bugatti Owner’s Club. Parisian Bugatti collector Henri Novo acquired the car by 1960, and under his ownership it had an original supercharger added, as did many examples of the Type 57. Later, the Atalante was housed at the famous Schlumberger Art Collection in Paris before eventually arriving in North America. In 2012, the consignor acquired the car from collector Michel Seydoux and subsequently commissioned a full restoration by Bob Smith Coachworks in Texas. 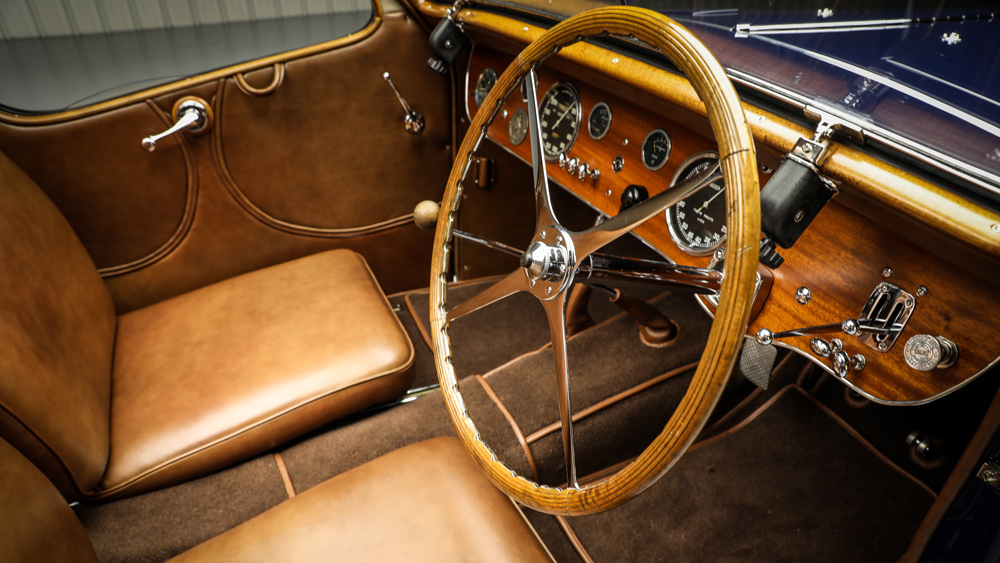 A look at the compact cabin, from which occupants could experience traveling at a top speed of 120 mph.  Photo: Courtesy of Worldwide Auctioneers.

“We have had a significant amount of interest in this Bugatti, as expected, as it is a significant example,” says Rod Egan, principal and chief auctioneer of Worldwide Auctions. “We are not surprised at the attention it has garnered, as it was a Best-in-Class winner at the prestigious Pebble Beach Concours d’Elegance. The roll-back style roof is not only very rare, but also very attractive. I eagerly await auction day so that we can see where the new home for this great car will be!” 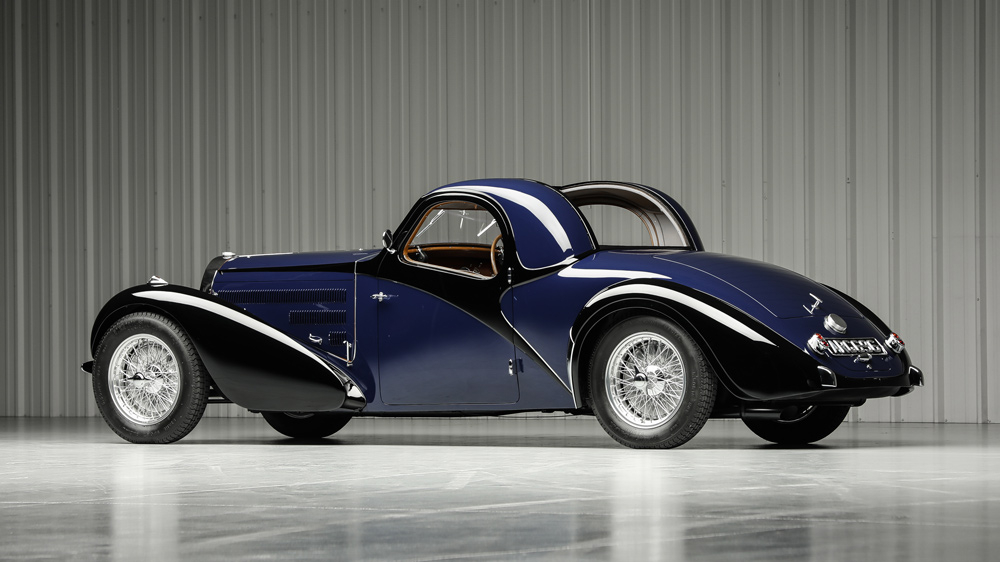 When it comes to value, Worldwide Auctioneers believes in letting the market speak, independent of published estimates. But if recent historic sales are any indication, this example is likely to bring substantial results. In 2020, Gooding & Company presented a Type 57S Atalante Coupé that fetched more than $10.4 million.