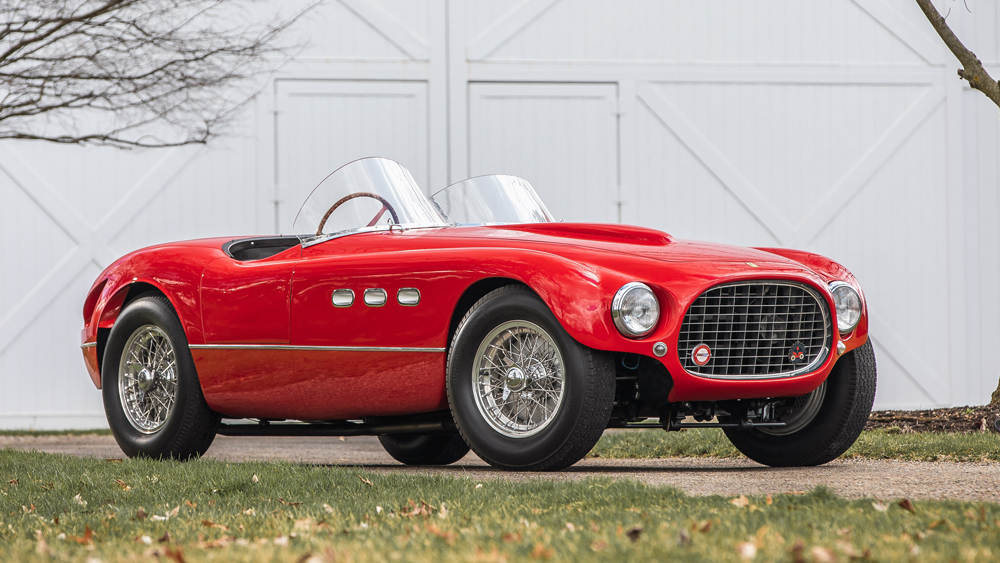 There are Ferraris, and then there are Ferraris. I’d light any flavor-of-the-month supercar, hypercar, megacar or whatever-you-want-to-call-it-car on fire to preserve an icon like the Ferrari 340 MM. It’s an automobile far more significant than today’s seven-figure, limited-edition baubles—trotted out predictably as clockwork—made to fatten OEM bottom lines. On the other hand, the Ferrari 340 MM is a model that actually achieved something in an age long before social media buzz was the measure of a car’s accomplishment. It won races and set the stage for an unrepeatable decade in motorsport, one where the Prancing Horse played a major role in shaping history, on and off the track.

The last of ten 340 MMs, built in the same year that Ferrari won the 1953 World Sportscar Championship, will be offered by RM Sotheby’s at its upcoming auction in Monaco on May 14. One of only four surviving 340 MM Spiders bodied by Vignale, it’s rare, beautiful and remarkably original. Chassis No. 0350 AM bears an even—as opposed to odd—number, identifying it as a purpose-built competition Ferrari. A nearly identical sister car to the 1953 Mille Miglia–winning example, No. 0350 AM was sold new by Luigi Chinetti to the American sportsman and sports car–builder Sterling Edwards, who raced it between 1953 and 1955, finishing first overall at both the Pebble Beach and Palm Springs Road Races in 1954.

Already an extremely limited model, this 1953 Ferrari 340 MM is one of only four surviving examples with a body by Vignale.  Theodore W. Pieper, courtesy of RM Sotheby's.

The first Ferrari, the 125 S, was built in 1947, with two examples made. That racer’s tiny 1.5-liter V-12 engine was designed by Gioacchino Colombo, Maranello’s chief engineer who would soon become a household name in the history of great Ferrari engines. As the 1949 Grand Prix season got underway, Colombo urged that supercharging his small-displacement mill would keep Ferrari competitive. But the fragility and highly strung nature of a blown engine was worrisome to Enzo Ferrari. Colombo’s junior engineer, Aurelio Lampredi, opined that a large-displacement, naturally aspirated engine would serve Ferrari better. The result was a long, tall 3.3-liter block that used single-port intakes and twin ignition. The power plant is capable of developing 300 hp, impressive output for the era, which was just what it took to go head-to-head with the Mercedes 300 SLR. The engine’s success in Formula 1 racing hastened Colombo joining Alfa Romeo, and 30-year-old Lampredi’s promotion as Ferrari’s chief engineer.

The example was sold new to Sterling Edwards, who raced it between 1953 and 1955.  Theodore W. Pieper, courtesy of RM Sotheby's.

Initially, Lampredi’s 3.3-liter engine powered two cars entered in the 1950 Mille Miglia. While transmission failures resulted in DNFs, the engine showed great potential. In late 1950, Ferrari introduced a 4.1-liter version of the V-12 in a model called the 340 America. That car won the 1951 Mille Miglia, also proving popular and competitive in SCCA races stateside. By early 1953, Maranello had launched the 340 MM, a car that soon dominated the racing season. Of ten examples built, seven were campaigned by Scuderia Ferrari for the FIA’s new Sports Car Manufacturers’ Championship, chalking up wins at the Mille Miglia, the 24 Hours of Spa, the Nürburgring 1,000 KM and the Giro di Sicilia. Those, along with smaller wins, earned Ferrari the 1953 World Sportscar Championship. Larger 4.5- and 4.9-liter V-12s followed, the latter powering Ferrari to victory at Le Mans in 1954.

The Vignale bodywork of this 340 MM features three oval ports in each front fender, a characteristic signature of Giovanni Michelotti, whose designs are typically more traditional and understated than the often flamboyant and eccentric designs from coachbuilders of the era like Zagato and Touring. This 340 MM was finished in a two-tone combination of dark blue and white, reportedly in honor of the buyer’s US nationality. With trophies under his belt, Edwards sold the car in 1955, after which it quickly passed through the hands of a number of local racers and then to collector Sherman Wolf for nearly 30 years. By 2012, it was in possession of the consignor, who showed it at the 2015 Pebble Beach Concours d’Elegance where it garnered the Phil Hill Cup.

Old race cars rarely remain intact with the passage of time, and so it’s notable that this Ferrari retains its matching-numbers engine, gearbox and rear axle. It’s currently fitted with what is believed to be the original engine block from chassis No. 0032 MT, a very important 1950 Scuderia Ferrari Works sports racer, with the original engine carefully preserved for display. As this vehicle is eligible for concours and events like the Mille Miglia, Monaco Historics and Le Mans Classic, the biggest problem for the next owner will be deciding what to do first.

Augustin Sabatié-Garat, RM Sotheby’s head of sales for Europe, puts this car in perspective, saying: “This is truly one of the most important and rarest of all 1950s Ferraris. The Vignale 340 MMs are beautiful and historically significant cars, and are so rarely available to the market that chassis 0350 AM represents a once-in-a-generation opportunity for any serious collector of important sports racing cars.” The example is expected to fetch anywhere from about $6.3 million to $8.5 million.