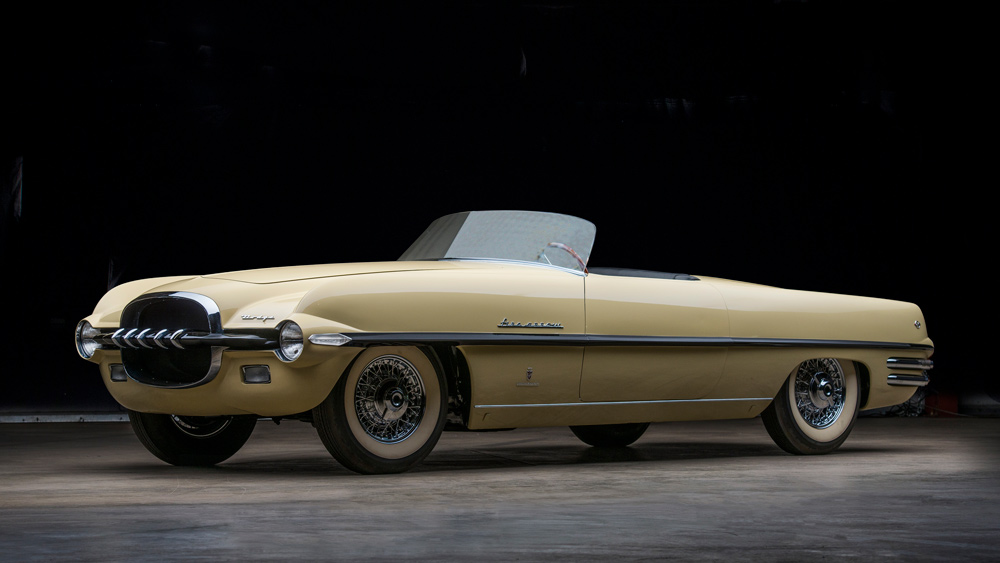 RM Sotheby’s will bring some significant automotive treasures to Monterey for its 24th annual auction held August 13 through 14 at the Monterey Conference Center. As is the auction house’s tradition, the sale includes dozens of important European sports and competition cars, as well as a unique concept car that wowed spectators when it was unveiled in 1954.

Concept cars were all the rage in the early postwar years, but the trend was actually begun by Buick’s Y-Job from 1938. Although Word War II put a hold on all civilian automotive production, within a decade, the motoring public was chomping at the bit to get behind the wheel of cars that reflected American postwar prosperity and the promise of the Jet Age. 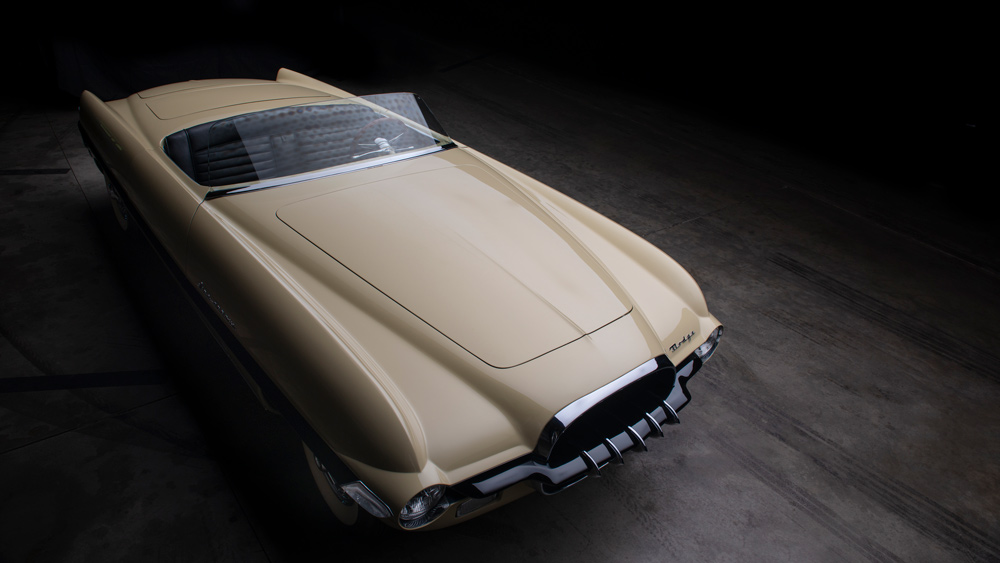 The 1954 Dodge Firearrow II concept car to be auctioned by RM Sotheby’s.  Photo by Darin Schnabel, courtesy of RM Sotheby's.

General Motors fueled public fantasy from 1949 to 1961, showcasing futuristic creations at its circus-like Motorama auto shows. Meanwhile, Chrysler was busy developing its own vision of the future with concept cars that—today—are among the most enduring designs. One that has aged particularly well over the intervening years is the 1954 Dodge Firearrow II by Ghia. The design was a hybrid, long before the word suggested gas and electric power-train configurations, but rather, the combination of sleek Italian coachwork and a powerful American V-8 engine.

One reason Chrysler’s concepts were so well received—and have remained such timeless designs—is the man who spearheaded them, Virgil Exner. Chrysler’s chief of advanced design, Exner had a flair for style that, while exuberant, emphasized balanced proportions and sophisticated lines, avoiding gratuitous chrome and gee-gaws popularized by GM stylists. Although the Firearrow II was designed and fabricated by Italian coachbuilder Ghia, the fact is, Exner’s aesthetic actually influenced many Italian stylists during the 1950s, resulting in a creative give-and-take that makes cars from the era among the most fascinating. 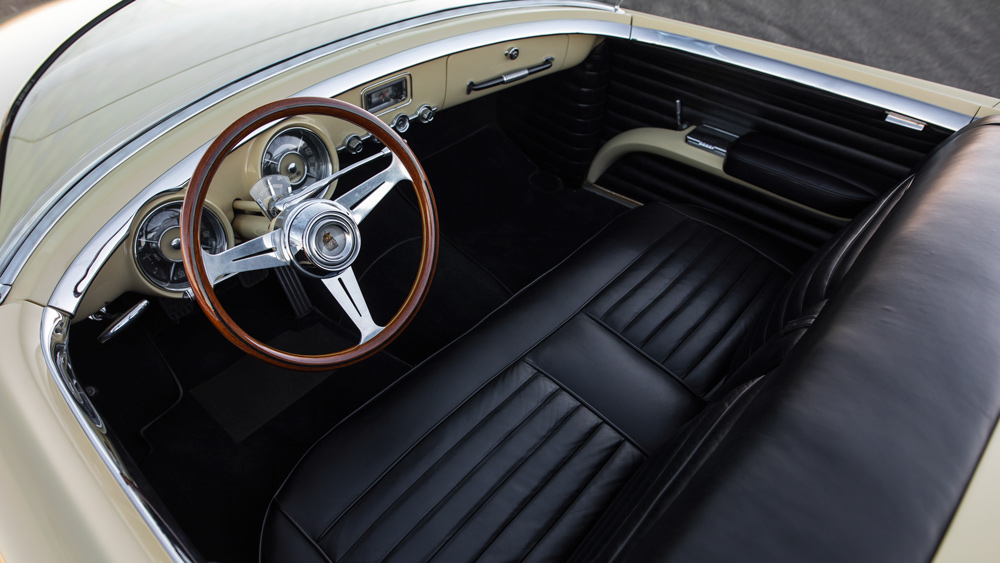 Unlike most other design chiefs, Exner was also quick to give credit to the men who actually penned his concepts. It was Ghia stylists who envisioned the signature wrap-around beltline and bisected grille of the Firearrows, which evolved quickly from 1953 to 1954. Four different cars were made, each with hand-formed bodies crafted by Carrozzeria Ghia in Turin, Italy. The Firearrow I, which debuted at the Turin Auto Show in 1953, was a “pushmobile,” lacking an engine and strictly made for the show turntable.

The 1954 Dodge Firearrow II was the first fully functional Firearrow and was widely exhibited at a time when America was infatuated with low, two-seat roadsters. The nation had recently embraced Chevrolet’s 1953 Corvette and was about to be introduced to the Ford Thunderbird for 1955. 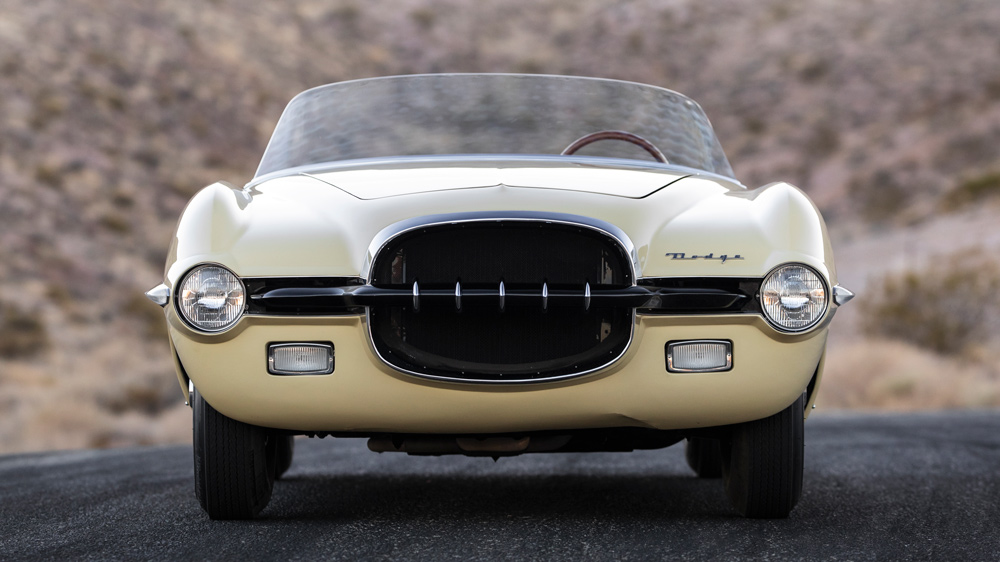 With an estimate of $900,000 to $1.2 million, the Firearrow II represents a significant design landmark, about which Gord Duff, global gead of auctions at RM Sotheby’s says: “We are thrilled to offer the Dodge Firearrow at the Monterey auction, as this show-stopping example has brought one of the most memorable concept cars to life and is sure to capture the attention of collectors and enthusiasts today as much as it did in period while on the show circuit as a concept car.” 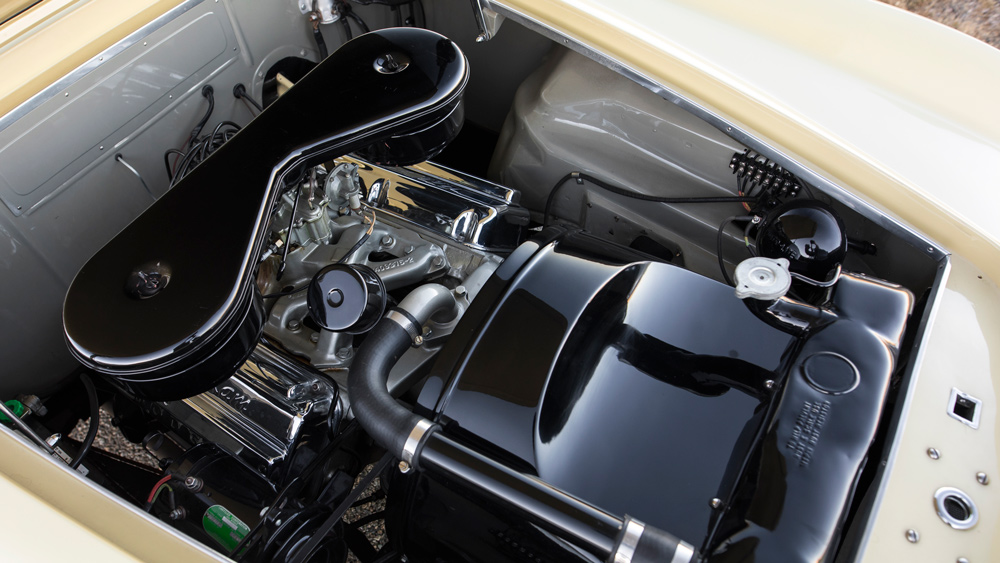 The Firearrow II is long and sleek, with its Italian body atop a Dodge chassis with a 119-inch-wheelbase—17 inches longer than the Corvette and Thunderbird. Painted a light yellow, the shape was clean and embellished with even less trim front and rear than the Firearrow I. The design featured round headlamps, and a quartet of exhaust pipes were integrated into the rear fenders. The car is powered by a Chrysler 241 cu in “Red Ram” Hemi V-8 engine with a Gyro-Torque fluid-drive four-speed automatic transmission. 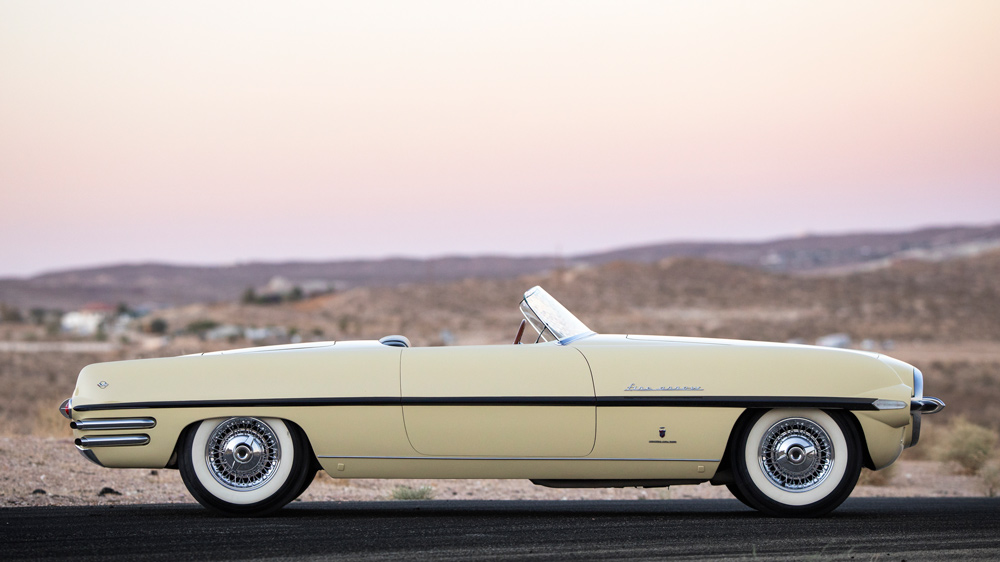 The Firearrow II has a 119-inch wheelbase, 17 inches longer than the Corvette and Thunderbird of the era.  Photo by Patrick Ernzen, courtesy of RM Sotheby's.

Following the success of the Firearrow II, Exner created a coupe (the Firearrow III) and a final roadster (the Firearrow IV), the latter in anticipation of a production version. While the Firearrows were never given the greenlight for production, the design inspiration afforded by them was put to good use. The elegant Dual-Ghia, made from 1956 to 1958 by Dual Motors in Detroit, was a Ghia creation powered by a big Chrysler 315 cu in Hemi V-8 in a Dodge chassis. 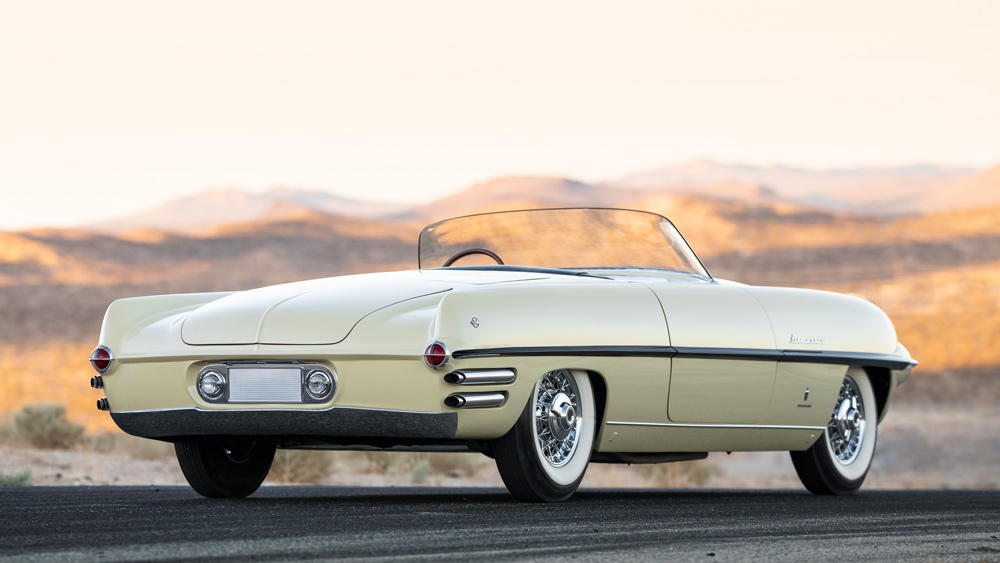 The unique automobile crossing the block through RM Sotheby’s was restored in the early 1990s as a part of the important Joe Bortz concept car collection, and is finished in its original light-yellow paint. And the black two-seat interior is punctuated by an Italian wood-rimmed Nardi steering wheel. The Firearrow II represents a Jet Age flight of fancy with few equals when it comes to concepts of the era.