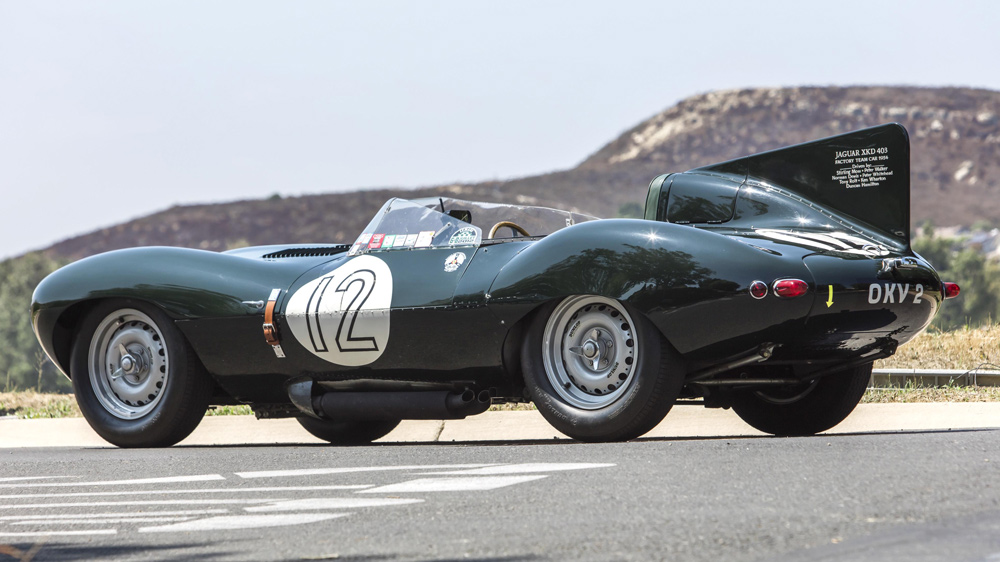 Singling out the most important Jaguar model ever made comes down to choosing between just a handful: the C-type, the D-type, the XKSS, and the E-type Lightweight. Of them all, the D-type is the marque’s most history-making competition car and one that dominated the second half of the 1950s motorsport scene. On offer from MM Garage is one of the few Jaguar Works racing D-types ever made—a car whose history is supported by extensive provenance and documentation.

Miles Morris of MM Garage holds this Jaguar in high esteem, noting: “The D-type is simply one of the greatest sports racing cars of all time. It won numerous worldwide races in the mid-1950s, not least winning the 24 Hours of Le Mans race three years in a row. Technically it was highly innovative, with its monocoque chassis design, aerodynamic and beautiful coachwork and highly efficient Dunlop disc brakes.”

Jaguar’s slippery bullet was built for one purpose—to win Le Mans. It was produced within a short span of time, from 1954 to 1957, with a total production of 18 factory team cars and 53 customer cars. The road-going XKSS was a civilized D-type of sorts, adding a passenger seat, windscreen and some street equipment. In 1957, 25 examples of the D-type were being modified to XKSS specification, and were in various stages of completion, when a fire at the Jaguar factory destroyed nine of them. Only 16 of the original ones remain today.

Evolved from the C-type, the D-type was powered by Jag’s straight-six engine that soldiered on into the 1970s in one form or another, and is surely one of the greatest power plants ever designed. The D-type—resembling almost as much an airplane as an automobile—employed a novel monocoque construction that made it lightweight and strong. The aerodynamic design by Malcom Sayer, an ex-aircraft engineer who went to work for Jaguar in 1950, featured an asymmetrically positioned vertical rear fin, and the general shape was a precursor to Jaguar’s 1961 E-type, another of Sayer’s brilliant designs. The Jaguar’s 3.4-liter engine developed about 250 hp and, with its formidable speed, gave Mercedes-Benz and Ferrari teams good reason to worry.

Identified as “OKV 2,” the D-type offered by MM Garage was the second of three works team cars fielded by Jaguar for the 24 Hours of Le Mans in 1954. Wearing racing No. 12, it was designated as the lead Jaguar, driven by Stirling Moss and Peter Walker. Practice runs set a new speed record of 172.97 mph flying down the 2.5-mile Mulsanne Straight, a staggering speed for the time. The car was almost 13 mph faster than its Italian competitor, the 4.9-liter, V12-powered Ferrari—which reached 160.1 mph—despite the Jag having 1.5 liters less displacement. With the heat on and leading the race, OKV 2 was forced to retire after midnight due to brake failure. Driven by Moss and Walker two months later at the 12 Hours of Reims, OKV 2 again failed to finish. Competing in the Tourist Trophy in September 1954, however, the car placed fifth, this time driven by Peter Whitehead and Ken Wharton.

Stirling Moss and Peter Walker raced the car at Le Mans, where it reached 172.97 mph during practice sessions.  Photo by Pawel Litwinski, courtesy of MM Garage.

Though it did not enter the 1955 24 Hours Le Mans, OKV 2 was used at Silverstone by Jaguar team manager Lofty England to acquaint prospective Jaguar team drivers Mike Hawthorn, Ninian Sanderson, Jimmy Stewart, Desmond Titterington and Don Beauman with the model. The vehicle was subsequently sold to Jack Broadhead and raced by Bob Berry at the May Goodwood Whitsun meet, where it finished behind Duncan Hamilton, who was driving OKV 1.

The car was campaigned by Berry from 1955 to 1956, returning to the factory Works Department to be rebuilt after accident damage sustained in the Summer of 1956. Successful in racing throughout 1957 and 1958, OKV 2 went on to have owners in the US and Canada. It was subsequently stored and finally returned to the UK for a rebuild by the marque experts at Lynx Engineering.

A prior owner, who purchased OKV 2 in 1999, put roughly 20,000 miles on the car before selling it.  Photo by Pawel Litwinski, courtesy of MM Garage.

In general, Jaguar’s D-type continued to dominate, and despite the company’s withdrawal from racing at the end of the 1956 season, the following year was an even more successful one for the model. Now powered by a larger 3.8-liter engine, D-types took five of the top six places at Le Mans in 1957, piloted by independent teams.

The D-type was certainly built to endure, as evidenced by OKV 2. One of the car’s prior owners, Arizona collector and Jaguar expert Terry Larson, bought it in 1999 and put about 20,000 miles on the automobile during his stewardship. Sharing some sage philosophy, he says: “We’re the caretakers of these cars. Nobody really owns these cars. It’s like they all have their own soul. They really belong to everybody.”