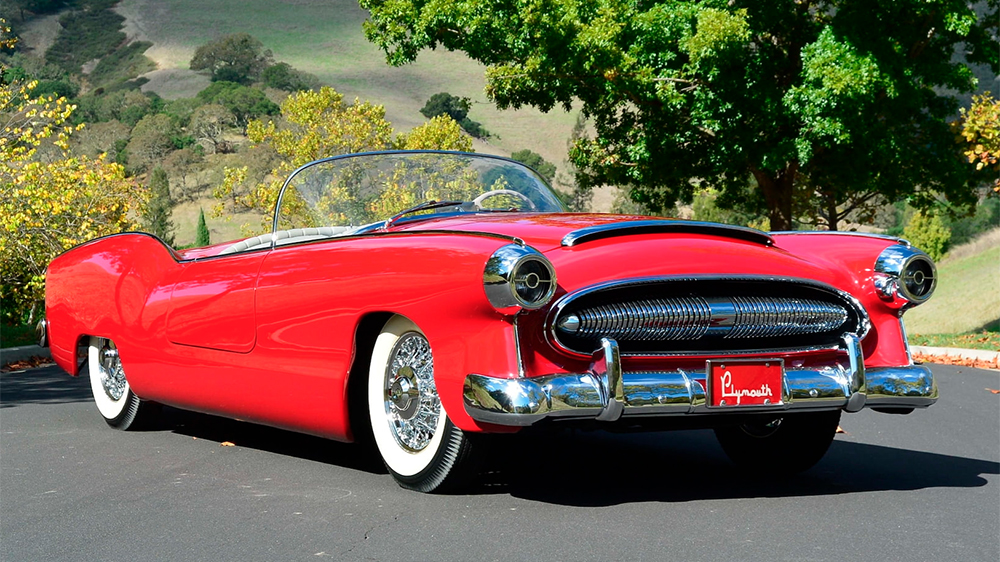 No mid-century American sports car was as successful as the Chevrolet Corvette. Sure, it had some competition during its first decade from the Ford Thunderbird, but the Corvette is the only speedster from that era still in production nearly 70 years later. Of course, maybe things might have turned out differently had Plymouth actually put it answer to Chevy’s two-seater, the Belmont, into production.

Unfortunately, the prototype stage is where the road ended for Plymouth’s sporty convertible. But while the car never made it off the production line, you can now get your hands on the only Belmont ever built through Mecum Auctions’ Mecum Gallery Exposition program.

In 1954, one year after the debut of the Corvette, Plymouth commissioned famed car designer Virgil Exner to come up with its own version of the sports car. The result was the Belmont, an eye-catching two-seater that made its debut at the 1954 Chicago Auto Show. Built upon the brand’s standard 114-inch chassis, the red convertible featured a curvaceous, fiber-glass body with chrome accents along the tailfins and the edge of the hood, as well as a matching chrome grille and bumper.

But it wasn’t just in its exterior styling that the Belmont attempted to keep up with the Corvette. The car also packed plenty of punch thanks to a 3.9-liter V8 capable of producing 150 horses that was mated to a three-speed “Hy-Drive” transmission. Not only did the Belmont concept mark the first time a Plymouth had been outfitted with a V8, the Corvette itself didn’t get a V8 until the next year.

Alas, as stylish and powerful as it may have been, Plymouth chose not to move forward with the Belmont. Despite this, the car would make two appearances on the big screen, first in Bundle of Joy in 1954 and then again in Mister Cory in 1957. It’s also spent the proceeding decades turning heads and winning awards at countless car shows and exhibitions throughout the US.

It should be noted that while it will be on display and available for inspection at Mecum’s 2020 Kissimmee sales event, 1954 Plymouth Belmont isn’t going up for auction. Instead, it can be purchased directly from the company. No asking price has been made public, but the Belmont previously sold for $1.32 million at auction by Barrett-Jackson in 2014.