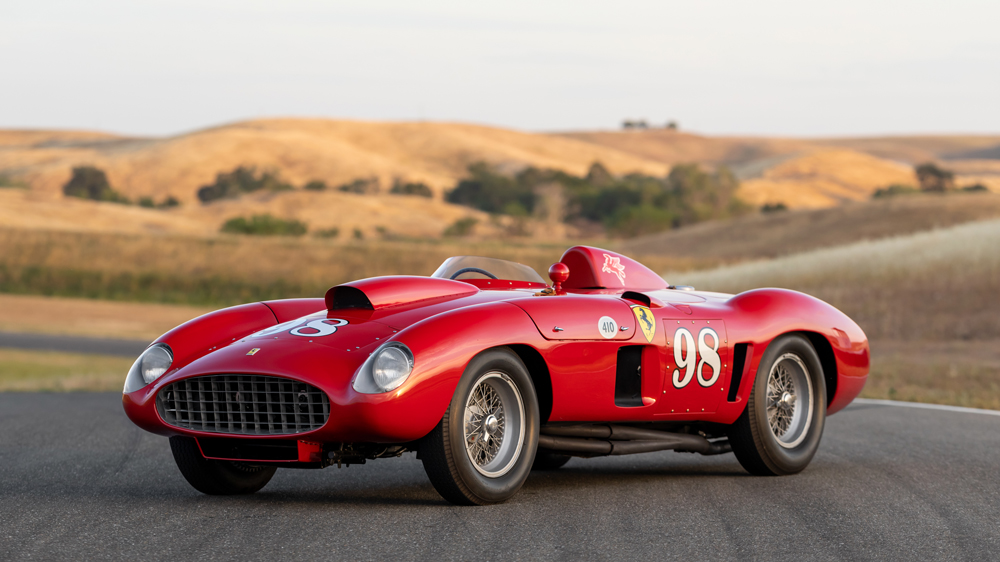 Sorting out 1950s-era Ferrari competition cars—as distinguished from Ferrari road cars—can be a daunting task. A centipede would need ten more legs to count just the number of sports cars and GT racers, and of each model, as few were production-line identical. Engines made during that decade ranged in displacement from 2.0-liter inline-four mills to 5.0-liter V-12s, and each was purpose-built to accomplish its racing task.

One unrepeatable Ferrari made for long-distance competition will be offered at the RM Sotheby’s sale, running from August 18 through 20, during Northern California’s famed Monterey Car Week. According to Gord Duff, global head of auctions for RM Sotheby’s, “The [Ferrari] 410 Sport is undoubtedly one of the most significant cars that RM Sotheby’s is bringing to Monterey. The car itself is rare, but the history that accompanies the 410 S is incomparable. Fangio, Hill and Shelby all drove this machine—with Shelby scoring victory after victory.”

The Ferrari 410 Sport Spider was designed specifically to win the grueling Carrera Panamericana, a dangerous five-day road race in Mexico that claimed the lives of many entrants. To gain a handling advantage on the treacherous course, Ferrari developed a tubular chassis with a lower center of gravity, and paired it with an engine that was the final iteration of the V-12 designed by Ferrari engineer Aurelio Lampredi. The latter, at 4.9 liters, was the largest Ferrari V-12 made at the time.

The 1955 Ferrari 410 Sport Spider being offered at the RM Sotheby’s Monterey auction, running from August 18 through 20.  Patrick Ernzen, courtesy of RM Sotheby's.

The car on offer, with chassis and engine No. 0598 CM, is one of only two factory-campaigned 410 Sports equipped with the hot-rodded 24-plug engine. Along with Formula 1–style twin-plug ignition per cylinder, it uses a quadruple distributor-and coil-ignition system and three voracious Weber 46 DCF carburetors. It makes almost 400 hp, 40 hp more than the single-plug V-12. But the 1955 Carrera Panamericana race, for which this car was developed, was never held, cancelled in the wake of the Le Mans disaster that same year. So, this 410 Sport’s debut was the opening race of the 1956 World Sportscar Championship at the 1000 KM of Buenos Aires, where it was driven by Juan Manuel Fangio. Despite its valiant driver, the race car succumbed to a failure with the differential, was returned to the factory and subsequently sold.

The nearly 400 hp car on offer is one of only two factory-campaigned 410 Sports equipped with a hot-rodded 24-plug Ferrari V-12 engine.  Patrick Ernzen, courtesy of RM Sotheby's.

The postwar era in American motorsport saw a number of gentlemen racers with plenty of money, and no one to answer to, who campaigned as privateers, driving cars from various marques, often with great success. Briggs Cunningham immediately comes to mind, for both his Maserati team and even the sports cars briefly manufactured under his own name. John Edgar was another, who after a boat-racing accident turned his sights on automobile racing with an MG TC. The success of Ferrari racers soon gained his attention, though, and he subsequently acquired a string of Maranello’s competition cars. On the circuit, Edgar eventually encountered—and was soundly trounced by—another 4.9-liter Ferrari 410 Sport (chassis No. 0592 CM) driven by an up-and-coming hot shoe named Carroll Shelby.

Chassis No. 0598 CM made its racing debut at the 1000 KM of Buenos Aires in 1956, where it was driven by Juan Manuel Fangio.  Patrick Ernzen, courtesy of RM Sotheby's.

Inspired, Edgar acquired his own 410 Sport, which happened to be chassis No. 0598 CM formerly raced by Fangio. Edgar soon had it piloted by hired-gun Shelby himself. His first time out in the car, Shelby took first place, and went on to a total of eight victories and 10 podium finishes in No. 0598 CM, more than in any other car of his racing career.

Altogether, the Ferrari was entered in nearly 40 races in-period, taking 11 wins and 19 podium finishes from 1956 through 1958. It also had a string of illustrious drivers, including Phil Hill, Eugenio Castellotti, Masten Gregory, Richie Ginther, Joakim Bonnier, Bruce Kessler, Jim Rathmann and Chuck Daigh. Even Enzo Ferrari acknowledged Shelby’s success in the ex-factory racer, sending congratulatory telegrams to Edgar. The colorful Shelby once told a Los Angeles Times reporter, “Nothing can touch this Ferrari if it runs.” Decades later, he added, “It was the best Ferrari I ever drove.”

In 1960, Edgar sold No. 0598 CM to Luigi Chinetti, whose intentions to race the car were thwarted by new regulations requiring a fixed roof, which when fitted, proved to make the car too slow to be competitive. After numerous victories and champions behind the wheel, the car saw its racing days come to an end. Chinetti kept the 410 Sport for 20 years, eventually selling the car in 1980. The consignor, who acquired the vehicle in 2006, eventually commissioned a rebuild of the engine by marque experts—a project completed in 2016.

Along with Fangio and Shelby, the list of famed pilots in this cockpit includes, among others, Phil Hill and Masten Gregory.  Patrick Ernzen, courtesy of RM Sotheby's.

Remarkably, this Ferrari retains its matching-numbers engine, chassis and body—the coachwork being one of the few designed and built by Sergio Scaglietti. Amusingly, the race car also retains its original fuel tank signed by Shelby, who wrote: “Mr. Ferrari told me that this was the best Ferrari he ever built.” Included in the sale are the first and last trophies, from 1956 and 1958, respectively, won by Shelby driving No. 0598 CM, as well as the original 1957 license plate from the Nassau race. Considering such unparalleled provenance, it’s no wonder this Prancing Horse has a high-end value estimated at $30 million.