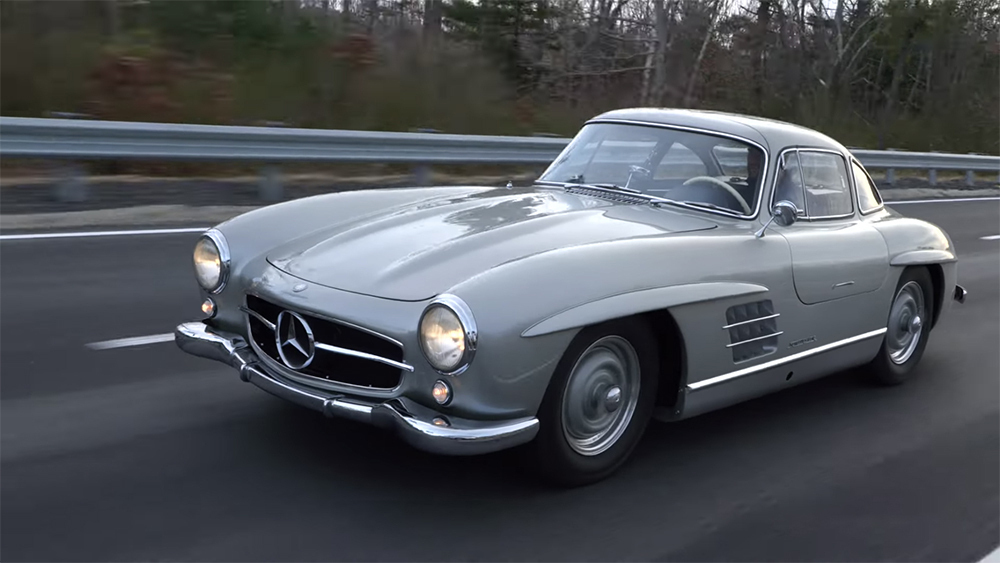 RM Sotheby’s is offering an incredibly rare and award-winning 1955 Mercedes-Benz 300 SL Alloy Gullwing at The Arizona Biltmore on January 27. The road-ready production model is fashioned after the marque’s 1952 track assailant, the W194, and maintains its lightweight aluminum exterior in a silver-gray metallic. Known as chassis number 5500332, the coupe is number 13 of just 24 Alloy Gullwings that were produced in 1955 and made available to private clients. But what makes this lot truly special is its numbers-matching 3.0-liter NSL engine—which delivers over 215 hp.

A look at the interior of the sports car with suspended doors.  Karissa Hosek/Courtesy of RM Sotheby's

The 300 SL’s stunning interior (see the video for proof) is fitted with blue gabardine fabric and blue vinyl, and is home to the Becker radio and 270-kph speedometer. The model even features a powerful 3.42 rear axle for quick acceleration alongside rudge center-mount wheels and vented front brake drums. Mercedes-Benz agent Joseph F. Weckerlé from Casablanca, Morocco, ordered the car the same year it was produced. It was the only vehicle from Mercedes to be delivered new to Africa at that time.

According to RM Sotheby’s, the model—nicknamed the “Weckerlé Alloy”—was imported to the United States early in its life. By 1975, it fell into the hands of Jack F. Bryan Jr. of Dallas, Texas, who immediately took the car to a renowned 300 SL restoration facility for light bodywork. Paul Russell and Company in Essex, Massachusetts (then operating under Gullwing Service Company in Topsfield) repaired the lightweight aluminum body so well that it was later named “Best Gullwing” at the Gullwing Group’s 1980 National Meeting.

Shortly after, Hyatt Creek, then the director-at-large on the Mercedes-Benz Club of America’s National Board, took ownership of the car. From 1984 to 1986, Creek was the national president of the MBCA and reportedly drove the Alloy Gullwing coupe to MBCA and Gullwing Group events all over the country. He also completed several iterations of the famous Colorado Grand and Texas 1000 road rallies in it, as well as driving tours. Creek held stewardship of the car for a solid 32 years before it was acquired by the cosigner in 2014.