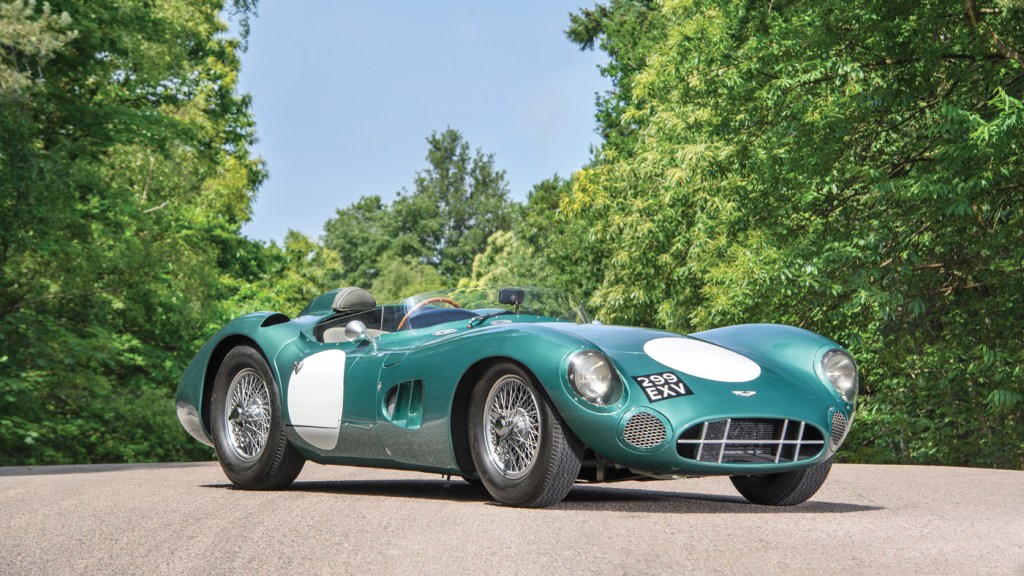 A pre-war Mercedes-Benz took Best of Show at the Pebble Beach Concours d’Elegance last weekend, and countless Ferraris got their fair share of attention. But those automotive staples aside, one could make a solid case that the 2017 edition of storied Monterey Car Week belonged to Aston Martin.

A legendary green machine, the Aston Martin DBR 1/1 is the first of an iconic run of racecars and the example that gave Sir Stirling Moss the win at the 1000-kilometer Nürburgring race of 1959— one of the greatest come-from-behind victories of his career. The very same vehicle has just made headlines again, this time as the most expensive British car to ever sell at auction, when it fetched an astonishing $22.5 million at RM Sotheby’s Monterey sale on August 18.

The Aston Martin DBR1/1 is still a rocket on the road.  Photo by Tim Scott, courtesy of RM Sotheby's.

That, ladies and gentlemen, is rare air, a price point typically reserved for Maranello rarities and Mercedes-Benz Silver Arrows. No doubt the sale of DBR 1/1 just put a smile on the face of current Aston Martin owners, as it’s a reminder of those epic mid-century days when Britain’s best routinely took the checkered flag over its continental rivals.

“When you’re looking at a car that is so historically significant, the price lines up,” says Ian Kelleher of RM Sotheby’s. The auction house successfully sold five of the six Aston Martins it brought to Monterey this year, including a 1959 DB4GT Prototype (garnering nearly $7 million) and a 2006 DBR9 (which fetched $616,000, a price twice that of its estimate).

“Because Aston Martin, over its history, hasn’t made as many cars as some of the other marques, we’ve seen strong gains in the last 10 years alone for cars such as the DB4 or DB5,” says Kelleher. “Think about it. About 20 years ago, a DB5 might cost you $100,000, today’s it’s around $1 million. They’re fantastic to drive, easy to own, spacious and sporting. They’ll continue to go up.”

The same likely goes for DBR 1/1, whose place in racing history has few peers. Spurred on by being spurned early in his career by Enzo Ferrari, Moss developed a life-long passion for beating the Prancing Horses whenever he possibly could.

In his epic 1959 Nürburgring drive, which in hindsight seems nothing less than superhuman, Moss led the race (breaking his own track record multiple times) before handing the car over to co-driver Jack Fairman. The latter pilot put the car temporarily in a ditch. Even with that setback, Moss, who took the wheel of the sinuous race car twice more, was able to post screaming laps that put the Aston back in the lead— finally crossing the finish line ahead of future Grand Prix champion Phil Hill with less than a minute to spare.