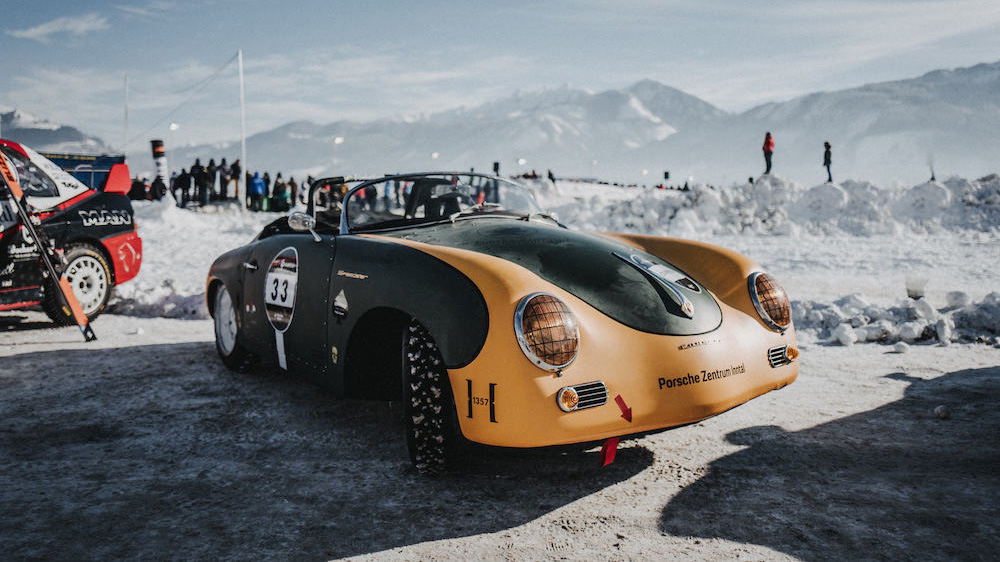 It’s not all that unusual to see a Porsche 356 for sale. After all, over 76,000 were built during the nearly two decades the model was in production. Far more rare is finding a 356 that’s been built for ice racing—and now one is up for grabs.

A competition-proven 1956 356A Speedster ice racer has been listed over at Italy’s GetYourClassic. The open-top sports car, like most 356s, is a true beauty, but it’s not just for show; the street-legal racer can be driven on the road.

This particular speedster began its life in the US, where it was sold by New York Porsche dealer Max Hoffman, one of the figures most instrumental in popularizing the marque in America, according to the listing. It features a stunning two-tone, olive green and golden rod yellow racing livery that’s been applied to accentuate the vehicle’s famous curves. Beyond the sporty paint job, the car also features a roll bar, yellow-lens headlights, custom brush guards, racing seat and period-appropriate rims wrapped in all-terrain tires.

The 356 was a huge hit with amateur and semi-pro race drivers, and this particular example was no different. The racer participated in at least 50 Sports Car Club of America (SCCA) Class races between 1972 to 1978. It also made appearances at the last two Grand Prix Ice Races in Zell am See, Austria, competing and acting as a tower. Sure, it may qualify as a senior citizen, but it’s still got plenty of life left in those four wheels.

It should come as no surprise that this 356 has undergone some modifications, considering all the time it’s spent on the track.  Despite this, it’s still powered by an air-cooled, four-cylinder boxer engine mated to a four speed manual, and features a period-appropriate gas tank and drum brakes.

The 356A Speedster ice racer failed to sell at auction last month, but you can contact GetYourClassic if you’re interested in adding it to your collection. The asking price is €259,000 (or about $312,000). That might seem like a lot for a 65-year-old ice racer, but considering this particular model’s history, it might just be a steal.