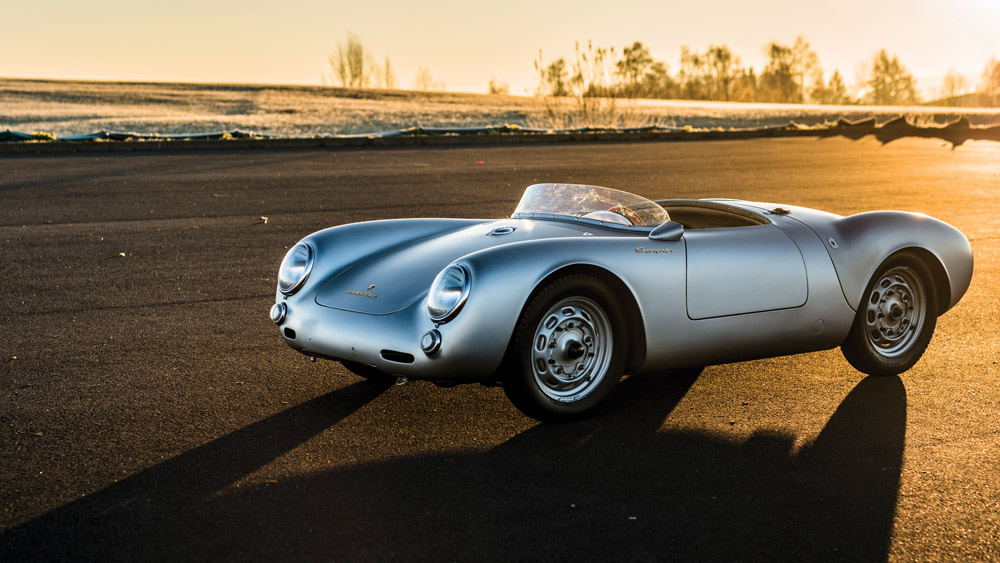 With only around 100 ever made, there are few cars more iconic than the Porsche that made Porsche—the 550 Spyder from the mid-1950s. With its minimalist function-defines-form shape—that nevertheless resulted in a form that has defied time—the 550 was a proverbial giant killer in its day. Its light weight (around 1,300 pounds) and small but torquey four-cam powerplant (good for around 120 hp) made Ferrari drivers wince in the turns and translated into big wins on road courses around the world.

What may well be the best documented racing 550 ever to come up for auction is the star of RM Sotheby’s offerings in Paris during the city’s Rétromobile show, the annual auto extravaganza that takes place this year from February 6 through 10. The 1956 Porsche 550 RS Spyder in question was delivered directly to a neighbor in the north, the Ecurie Nationale Belge. The Belgian national racing team promptly took its yellow-by-design 550 to myriad competitions across Europe.

What’s more, chassis No. 550-0082 has the distinction of being first driven by Gilberte Thirion, a well-regarded pioneer who was among the few women that took to the track in that era. Thirion ran the car hard in events ranging from Rallye Monte Carlo to the Mille Miglia. And that was the least of it.

The roadster ran at Le Mans in 1956.  Photo by Remi Dargegen, courtesy of RM Sotheby's.

This 550 took on the 1956 24 Hours of Le Mans (where it was disqualified due to an irregularity) and hit a dozen other races including the 1957 1000 KM of Nürburgring before then passing to a number of continental drivers. Throughout its racing heyday, meticulous notes were kept about everything from what tires the car was wearing to what its camber settings were on a given day. There are even receipts for mechanics’ hotel stays, all of which can paint a picture of the car’s life on the European circuit for its new owner.

“It’s so rare to have one of these cars come up with such documentation, and have it all survive throughout the decades,” says RM Sotheby’s car specialist Oliver Camelin. “You feel like you’re really sitting in a piece of history.”

Speaking of its life after those early racing days, the car changed hands a number of times and even saw its original aluminum body discarded in some manner, only to have it replaced by a fiberglass alternative for a number of years. Fast forward to the 1990s and its owner at the time decided on a full restoration that included a hand-beaten aluminum body as well as the installation of a correct engine and gearbox in time for a 2001 running in the Mille Miglia Storica.

With some recent 550s selling for around $6 million, Camelin says the auction house has made a downward adjustment to the price of this car due to the correct-but-not-original parts. But, he says, don’t confuse that for this being a lesser vehicle. In fact, he contends that the next owner of chassis No. 550-0082 is likely to enjoy the vehicle more than someone with a fully original 550.

“This car is for someone who truly wants to enjoy what a 550 is all about, because they can take it out to the track and race it and even damage it, knowing that it can be repaired and that what you’re repairing isn’t the original body,” says Camelin. “That’s not the kind of peace of mind you get every day when you own this kind of collector’s item.”