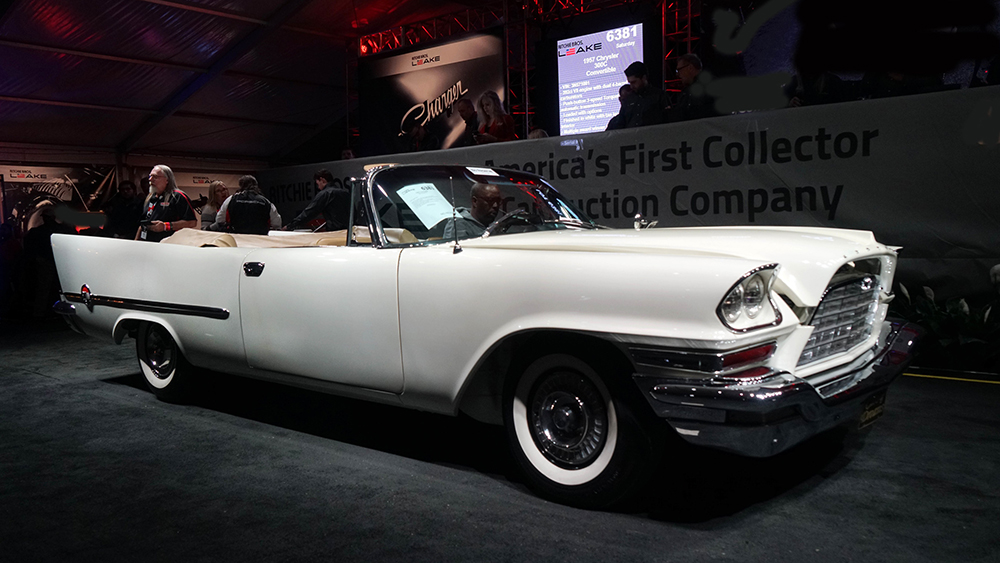 Another day, another world record broken at Scottsdale.

A rare 1957 Chrysler 300C convertible was snapped up during the inaugural Leake Auctions sale for the record-breaking price of $357,500. Thousands of car enthusiasts attended the four-day event, which was held at Salt River Fields at Talking Stick, and $17 million-worth of coveted vehicles were sold.

The auction house did not disclose who purchased the Chrysler, but the lucky buyer must be thanking the car gods. In the late 1950s, Chrysler’s 300s ranked as America’s most powerful cars, nabbing the NASCAR manufacturer championships in ’55 and ’56. This specific model is not only part of that historic legacy, but has been kept in impeccable, near-mint condition. The sleek convertible sports a gleaming white paint job and features a distinctive grill, a peaked hood, iconic dual headlights and a narrow strip of chrome on the rear.

Over the multi-day sale, Leake also auctioned two vehicles for charity: a 2020 Gladiator IASO Rubicon Jeep and a 2020 Indian Springfield Jack Daniel’s motorbike. The Gladiator sold for $145,000, with a further $30,000 raised from the crowd. All proceeds will go toward the Austin Hatcher Foundation.

Meanwhile, the Indian motorbike was sold three times during the Leake auction—twice the buyers asked for the motorbike to be sold again—and raised a total of $130,000, which will be donated to The Armed Forces YMCA and Jack Daniel’s Operation Ride Home.

Every January, the major houses clock up lofty sales during the Scottsdale auctions, and the charity component certainly is the silver lining. Last Saturday, Barrett-Jackson announced that is raised $7.6 million for various causes.