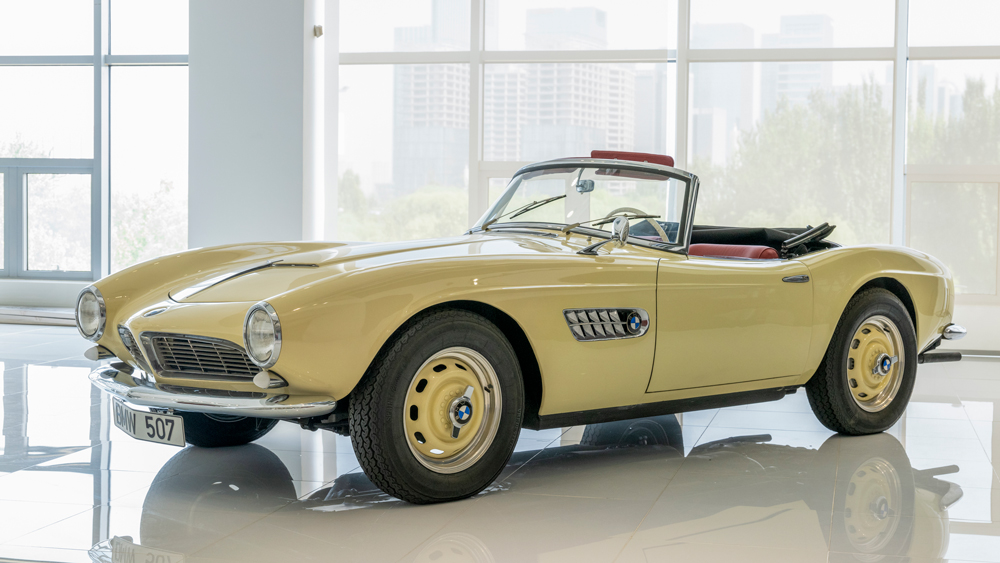 BMW enthusiasts have much to celebrate with the upcoming RM Sotheby’s auction in Munich on November 26, when 32 of the marque’s cars and motorcycles from the privately owned Bavarian Legends Collection will be offered at no reserve. A highlight of the sale is a 1958 BMW 507 Roadster, regarded by many collectors as perhaps the most desirable BMW model ever made.

BMW’s 507 Roadster was inspired by one man, Max Hoffman, the US automobile importer who was single-handedly responsible for three of the greatest sports cars of the 1950s. Without Hoffman, the BMW 507, Mercedes-Benz 300 SL and Porsche 356 Speedster would never have been built. His grasp of market opportunities, especially in America, was prescient, although the BMW 507, with only 252 examples built from 1956 through 1960, did not see the commercial success of its Hoffman-inspired German rivals.

That, however, does not diminish the significance of the 507 in any way. Amid the often flamboyant and garish automotive styling from Europe and America throughout the 1950s, it would be easy to overlook the 507’s balanced and pleasing design. The quiet sophistication and perfect postwar proportions of the 507 had an impact far beyond the model’s limited production. It’s an impact that continues today and was clearly reflected in the BMW Z8, its spiritual successor made from 1998 to 2006.

The German industrial designer Albrecht von Goertz was hired at the behest of Hoffman to pen a shape for the 507 that would be understated yet seductive from every angle. Goertz certainly succeeded, and his design is not reliant on exaggerated parts or gratuitous ornamentation but, rather, the sculptural integrity of the car’s volume and shape as a whole.

The 507 was produced in two series. The latter features more interior room and luggage space, a redesigned dashboard and a more easily stowed retractable fabric top. A total of 34 examples of the Series I cars were built in 1956 and early 1957, with 218 Series II cars constructed through 1960. This 1958 507 Series II, with its original color combination of cream with a red leather interior, expresses the essence of Goertz’s elegant design.

The 507 is a solid car, and despite its small size and aluminum body, weighs nearly 3,000 pounds. It’s powered by BMW’s 3.2-liter aluminum OHV V-8 engine that develops about 150 hp and achieves a top speed of 122 mph. The 507 also achieved a top price at the time it was introduced. While Hoffman intended the car to sell for about $5,000 in North America, production costs ultimately doubled, resulting in a price of $10,500, with BMW still losing money on each one built.

Notable 507 owners included Elvis Presley and Fred Astaire. Of greater interest to enthusiasts of motorsport history, though, is that John Surtees was presented a 507 by Count Domenico Agusta after winning the 1956 500 cc World Motorcycle Championship riding an MV Agusta. Surtees owned that car for the rest of his life, and in 2018 it sold for a staggering $5 million, the highest price paid for a 507 at auction—no doubt thanks to its rich provenance.

Although not expected to reach that rarified level, the BMW 507 on offer through RM Sotheby’s carries an estimate of up to $1,957,000, which reflects current market values.