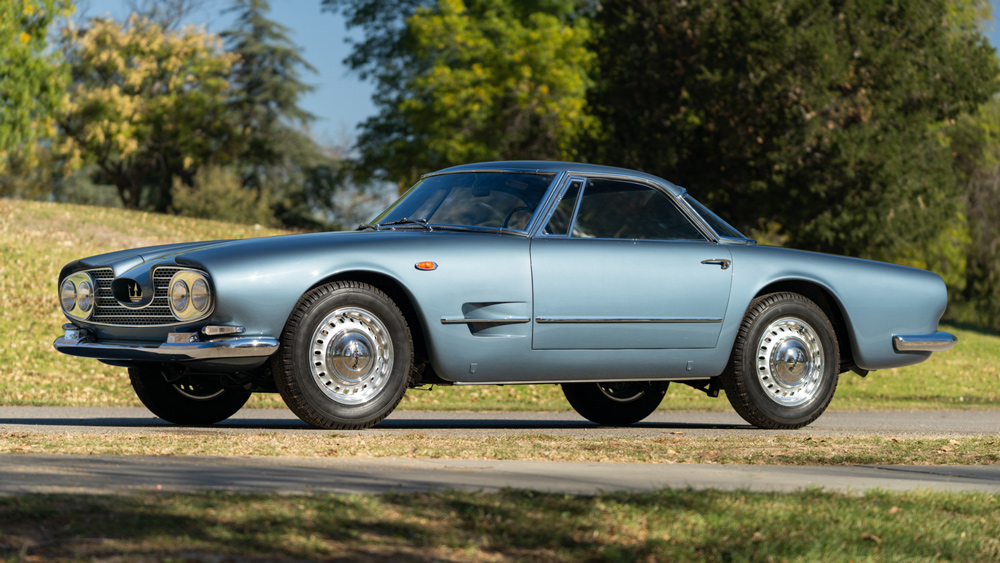 When it was unveiled in 1959, the Maserati 5000 GT was the Italian marque’s fullest expression of Gran Turismo, the ultimate Maserati road car of its era and the only one to rival Ferrari’s exclusive Superamerica. The auction of any 5000 GT is an occasion, and on January 24, this 1961 example will be offered as part of Gooding & Company’s Geared Online Scottsdale Edition sale.

Available in the Maserati catalog from 1959 through 1964, the Tipo AM103, as the 5000 GT was officially designated, established a series of achievements. It was Maserati’s first V-8-powered road-going automobile, and Europe’s first fuel-injected V-8 (only Chevrolet had done that commercially before). It was also, during its brief lifetime, the fastest and most expensive production automobile in the world.

According to David Brynan, senior specialist for Gooding & Company, “The Maserati 5000 GT is one of the most extraordinary cars of its generation—truly a car of kings.” And as far as the model’s exclusivity, he adds that “only 34 were ever built, and of those, just three were bodied by Carrozzeria Touring, including the first example, which was built for the Shah of Iran.”

Rarity is relative, and the genealogy of the 5000 GT is complex. A vital primer for serious enthusiasts is Maserati 5000 GT—A Significant Automobile by Maurice Khawam and photographed by David Gooley (published in 2001), which comprises the definitive history of the model. The book tells the story of a car whose family tree is close-knit and complicated. With such few made, and by eight coachbuilders, even the most plentiful among them—the 22 examples of the Allemano-bodied cars—are exceedingly rare. Carrozzeria Touring Superleggera and Frua made three each, Monterosa built two and the examples from Bertone, Ghia, Michelotti and Pininfarina are unique. It’s as fascinating a story as any Italian carmaker has to tell.

Apart from luxurious bodywork in a variety of guises, what made the 5000 GT special was its engine, a 5.0-liter V-8 derived from the high-strung 4.5-liter unit that powered Maserati’s most formidable race car, the 450 S. Bored out to 4,937 cc, that engine would, in smaller or equal displacement, eventually become the heart of models like the Quattroporte, Ghibli, Bora and any number of mostly forgotten jewels in Maserati’s Trident like the Mexico, Indy, Khamsin and Kyalami. The latter four were produced in numbers that dwarfed the 5000 GT by comparison.

Of the 34 examples of the 5000 GT built, Carrozzeria Touring Superleggera made the bodies for three.  Photo by Mike Maez, courtesy of Gooding & Company.

It’s important to remember that the handmade bodies of coachbuilt vehicles like the 5000 GT are idiosyncratic, as one might imagine for cars hammered out of aluminum sheet metal and wrapped around a racing chassis and drivetrain. The clients thus attracted to such bespoke GTs were the richest elite, including captains of industry and royal figures such as Gianni Agnelli, the aforementioned Shah of Iran and Karim Aga Khan.

Touring’s 5000 GT is distinguished by an unusual grille design that pays homage to Maserati’s victorious 250F Grand Prix cars. Oddly retro today, the strange central snorkel would have been regarded a cutting-edge design flourish at the time, as evocative of the Space Age as a Jell-O mold or a beehive hairdo. Chassis No. AM103.010 was displayed at the Geneva Motor Show, and was subsequently modified and shown in November at the Torino Motor Show. It was retained by the factory through 1961, during which time it was used as a testbed for an experimental 3.8-liter V-8 engine. It was finally sold to a member of the Orsi family—owners of Maserati at the time—and equipped with the larger Tipo 103 Lucas fuel-injected 5.0-liter V-8. In 1965, it was again returned to Maserati, where it was rebuilt to special order for Prince Abdel Majid bin-Saud of Saudi Arabia, featuring some stylistic embellishments it no longer retains.

Provenance since the 1980s has included ownership by US and European collectors, and most recently by an owner who commissioned a restoration aimed at returning the car to its final configuration, as it was sold by Maserati in 1961. Repainted in correct Azzurro Vincennes with black leather upholstery, it is presented in partially restored condition, affording its new owner the opportunity to complete its restoration and hit the concours circuit. The lots crossing the block at Gooding & Company’s Geared Online Scottsdale Edition will begin closing on Friday, January 28, and this Maserati—estimated at $700,000 to $900,000—can be viewed in Scottsdale prior to the auction.

“These Maseratis rarely appear for sale, and when they do, they always command attention,” says Brynan. “This is the last of the three Touring-bodied 5000 GTs, and it is a car which has never before been seen at public auction . . . the perfect candidate for a collector who wants to debut a significant Maserati at leading concours like Pebble Beach and Villa d’Este.”