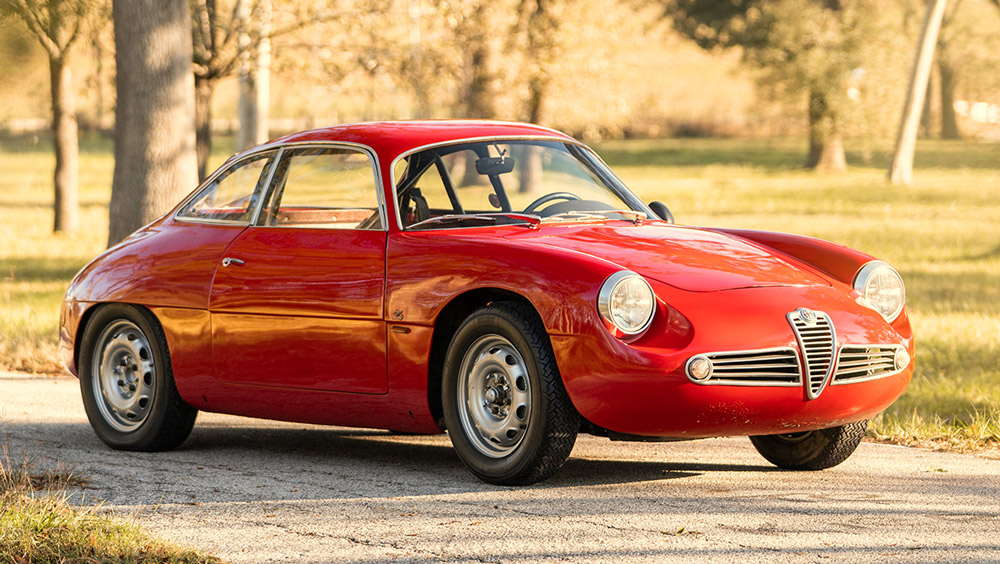 Sometimes, exceptional creations are made by sheer happenstance, à la Champagne or the limited production of Alfa Romeo’s Giulietta Sprint Zagato. As the story goes, in 1956, Italian coachbuilder Elio Zagato received a damaged Alfa Romeo Giulietta Sprint Veloce that needed new coachwork. Zagato created a lighter, more aerodynamic, minimalist-styled body that was made out of thin aluminum panels. When fit to the existing Veloce foundation, the new coachwork transformed the Giulietta into a speedster that could compete with—and outperform—GT cars of the era that were powered by engines with greater displacement.

Before long, other Sprint Veloce owners were bringing their race cars to Zagato. Once Alfa Romeo witnessed these re-bodied Giuliettas in action, the Italian automaker contracted the coachbuilder to create a limited run of factory-sanctioned racers, now commonly known as Giulietta SZs.

Constructed around a short-wheelbase chassis, these competition gran turismo SZs were originally equipped with an aggressively tuned tipo AR00120 engine—kept in check by powerful, finned-aluminum drum brakes—a five-speed gearbox and large-capacity fuel tanks. Inside, the vehicle’s cockpit reflects the competitive purpose of the car: a three-gauge instrument binnacle is all that adorns the dash, while two, vinyl-upholstered tube-frame seats fill out the rest of the space.

The car’s tipo AR00120 engine is mated to a five-speed gearbox.  Photo by Josh Hway, courtesy of Gooding & Company.

In total, only 200 Giulietta SZs were built, and Gooding & Company is brokering the private sale of a well-documented 1960 example, which has been hidden away for the better part of four decades and carries an asking price of $495,000. Largely unchanged since it arrived in the United States in 1978, the car (now painted red, but originally gray), was raced in the 4 Hours of Pescara in 1961, as well as the Coppa Inter-Europa that same year. It later competed in the Monterey Historic Automobile Races at Laguna Seca in 1980.

The vehicle is largely unchanged since it arrived in the United States in 1978.  Photo by Josh Hway, courtesy of Gooding & Company.

“This car is desirable in that it was raced in Italy in period, and then served as an early vintage racer in California,” says David Brynan, Gooding & Company’s senior specialist. “It would be a great candidate for vintage racing and rallies, or it could be restored to concours condition.”

A three-gauge instrument binnacle is all that adorns the dash.  Photo by Josh Hway, courtesy of Gooding & Company.

Because the car has sat idle for several years, it requires some mechanical attention before being suited for open-road driving. That being said, aesthetically the car is in fine, unrestored condition and showcases its Zagato-stamped body number (No. 441) in several places.

This example has been hidden away for the better part of four decades.  Photo by Josh Hway, courtesy of Gooding & Company.

According to Brynan, this SZ, thanks to its period-racing history and well-documented provenance, belongs within “a rarified category of Alfa Romeo competition cars.” One thing’s for certain, the purchase of such a car is certainly worthy of a celebratory glass of Champagne.