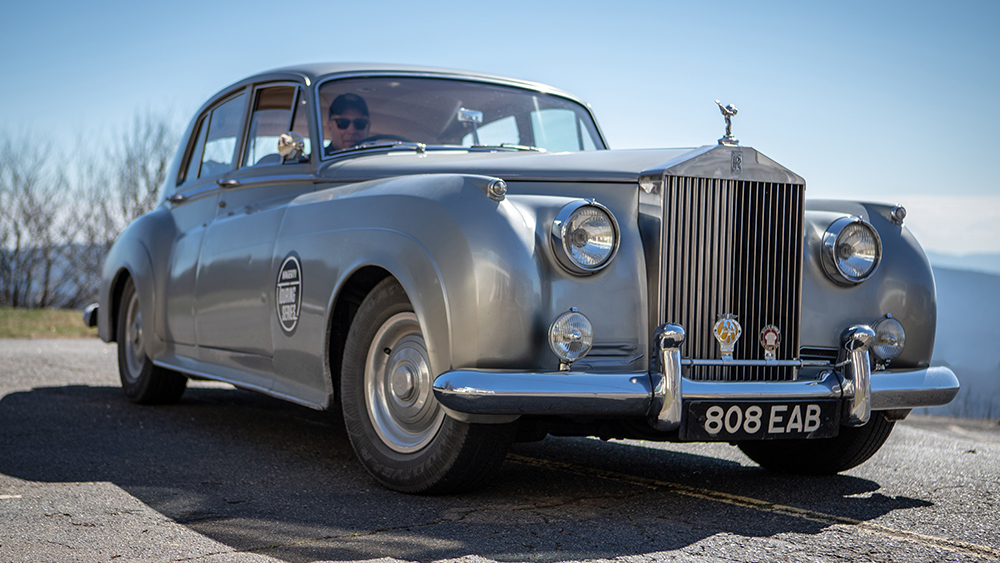 “My only advice is that this is a 4,600-pound car with drum brakes, so hit them early and hit them hard,” a gentleman from Hagerty’s DriveShare program informs me as I turn over the engine on a 1962 Rolls-Royce Silver Cloud II and prepare to inch out into Amelia Island Concours d’Elegance traffic. It’s a fair and helpful note, and I give the brakes a test-stab after we move down the road a bit. There’s a decent amount of pedal travel but when the stoppers finally bite, they slow the rolling British luxobarge down quite adequately.

The tiller is thinner and more dainty than I would’ve thought for a car with such largess, though it turns decently if you’re above 25 mph, despite the lack of power steering. With the (power!) windows down, I rest my arm on the well-worn wooden waist rail and gaze around the admirably-appointed interior. Behind the right-hand-drive wheel, you get an appreciation for why the British don’t call this “driving.” No, this is far more eloquent. This is “motoring.”

I tip into the throttle a bit more when the traffic breaks up, and the V-8 responds with a throaty push, as the prow of the Roller edges skyward, seemingly encouraging the Spirit of Ecstasy bonnet ornament to take flight. New, there were more than 230 horses in that 6.2-liter aluminum block, and while time has likely seen that number dip, the old gal can still get up and hustle.

“She just floats,” I remark to the Hagerty minder, as we glide into a turn. The Silver Cloud lilts from side to side in a corner, but you never feel uncomfortable. “The guys before you had their coffees on the folding tables in the back. Nothing ever spilled, even around the corners,” the Hagerty fellow replied.

Speed is rather subjective, and the original speedometer fluctuates somewhere in the general vicinity of how fast you’re going, but it refuses to be pinned down to one constant number. It’s a charming quirk that will make you smile and appreciate the time behind the wheel even more.

This very experience can be yours, thanks to Hagerty’s DriveShare. Imagine a Hertz full of high-end modern and historic wheels, and you’ve got the basic gist. Owners can list their steeds on the site, after being vetted for safety and reliability, and then prospective renters can peruse the site and make an inquiry. This very ’62 Rolls-Royce is available for $650 a day, in the Lancaster, Pennsylvania area, but hundreds of other vehicles are scattered around the country.

“When you want to drive something, we’ll check out your driving record to make sure it’s clean, and then we have the owner meet the renter to conduct the final transaction,” Peter Zawadzki, director of DriveShare, tells me. “There’s a test drive to make sure both parties are comfortable, and either side can walk away if they’re not. At the end of the day, we want to build a connection between the renter and the owner because that builds credibility for the program.” Prices include insurance and road-side assistance from Hagerty, should anything go awry. But that’s unlikely, as the vehicles are well maintained and run smoothly. “The owner drove it down to Amelia himself,” Zawadzki says of the Silver Cloud. “He kept up with all the Porsches along the route. The car runs great.”

Should you ever find yourself piloting an early Rolls-Royce, settle into those seats with a beautiful patina and prepare for the Grey Poupon jokes at every red light. Oblige the commenters a light smile, then tune them out. You’ve got some motoring to do.