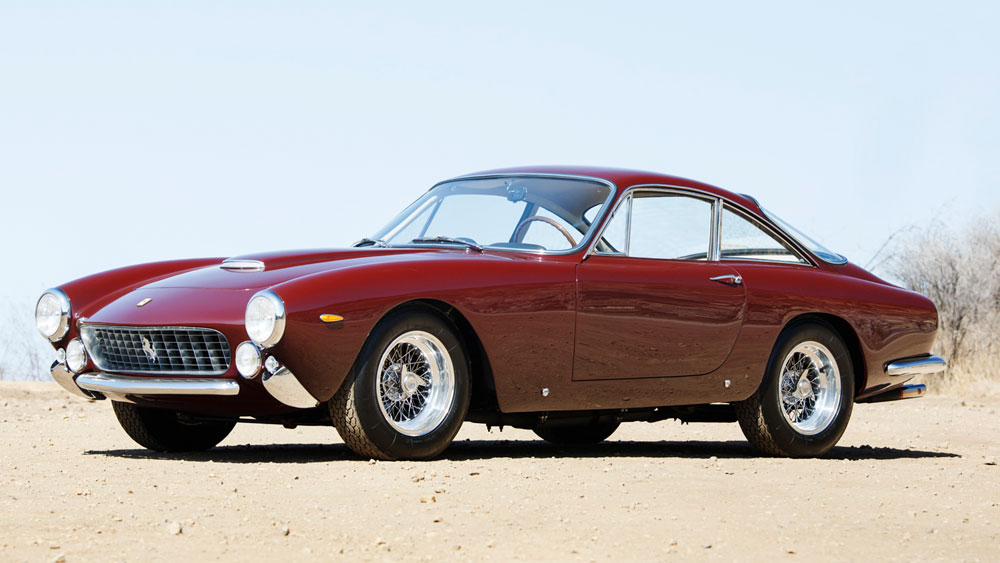 As new online-only auction purveyors continue to enter the field, conventional auction houses are running neck-and-neck with their own digital events, such as Gooding & Company’s Geared Online sale from October 26 through 30. And for the latter, collectors will have the chance to bid on a winning trifecta of Prancing Horses.

Leading the lots announced so far is a 1964 Ferrari 250 GT Lusso, estimated to fetch as much as $1.8 million. The model, of which only 350 examples were made from 1962 through 1964, was designed by Battista Farina (founder of Carrozzeria Pininfarina) and constructed by Carrozzeria Scaglietti. Befitting the Lusso moniker—Italian for “luxury”—the car is roomier inside than the standard 250 GT, and was developed to be the consummate curtain-call for the 250 GT line. Although a grand tourer for the glitterati, it was also campaigned in motorsport, including the Tour de France and Targa Florio.

The 1964 Ferrari 250 GT Lusso available through Gooding and Company from October 26 through 30.  Photo by Brian Henniker, courtesy of Gooding & Company.

“The Lusso is a beautifully restored example of one of the most admired cars from the famous 250 GT series,” says David Brynan, Gooding & Company senior specialist. The car crossing the virtual block—chassis No.5931 GT—was delivered to Ferrari’s pioneering Stateside dealership, New York’s Luigi Chinetti Motors, as one of the final from production. Presented in Amaranto red with a beige interior, the vehicle underwent a full restoration and still has its original engine.

A peek inside the restored interior of the 1964 Ferrari 250 GT Lusso crossing the digital block.  Photo by Brian Henniker, courtesy of Gooding & Company.

Less than a decade later, another of Gooding & Company’s lots was born, a 1972 Ferrari Dino 246 GT. When introduced in 1969, the model—a successor to the Dino 206 GT—was equipped with a 2.4-liter V-6 mated to a five-speed manual transmission, and had an official top speed of 146 mph. With an estimated value from $275,000 to $325,000, this mid-engined example—chassis No.03392—is from the third and final series of production, the Tipo E. As the latter series was the first to be made available in the United States, the car on offer features specifications for the North American market and is, according to Brynan, “a really attractive and well-presented 246 GT.”

Rounding out the Ferrari stable from Gooding & Company, at least so far, is a more contemporary model from Maranello, the 575M. Debuted in 2002, it’s the marque’s first V-12-powered street car to feature a paddle-shift, automatic manual transmission. The 2005 example available for bidding, however, is fit with a six-speed manual gearbox, a rarer configuration for the model. With less than 10,000 miles on the clock, the car is valued at between $275,000 and $350,000.

“Gooding & Company is thrilled to announce these three classic Ferraris, all of which are iconic yet relatively attainable and user-friendly models,” says Brynan. “These are all blue-chip Ferraris that check all the right boxes for collectors, but cost far less than many comparable models. We are looking forward to finding new, appreciative homes for each of them.”

The 2005 Ferrari 575M on offer has a six-speed manual gearbox, rare for that model.  Photo by Mike Maez, courtesy of Gooding & Company.

The catalog is set for release on October 19, and lots will be available for on-site viewing prior to the auction. Bidding will begin at 9 a.m. PDT on October 26.