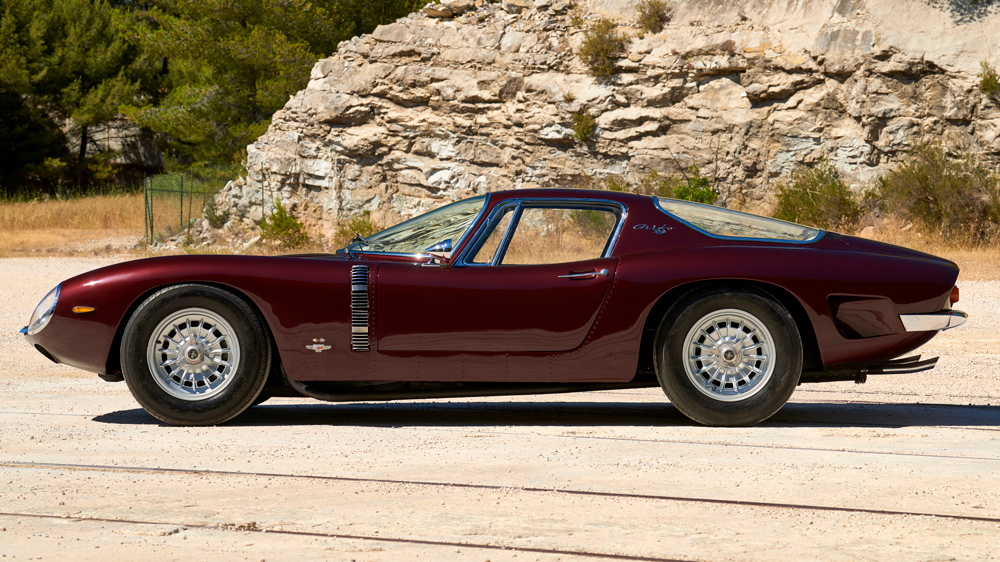 One of the most interesting auctions of the year is the upcoming RM Sotheby’s sale featuring 75 road and race cars from the Guikas Collection. Taking place at the Paul Ricard Circuit in France on November 19, the lots on offer reveal the refined but eclectic taste of a collector whose interests embraced Le Mans and Formula 1 competition cars as well as more genteel sports and luxury GTs. One automobile is particularly appealing for its beauty, rarity, ownership history and the sheer audacity of its creator—a 1965 Iso Grifo A3/C.

The story of Iso is one of the marvelous footnotes in Italian automotive history. Although greatly overshadowed by three marques whose names end in “i,” cars wearing the Iso badge are indisputably some of the most beautiful and intriguing designs of the 1960s. That may be because the most alluring models were penned by Giorgetto Giugiaro, whose Grifo A3/L and A3/C are the high watermarks of Iso style. Both debuted at the 1963 Turin Motor Show, the former as a GT car wearing a sleek body built by Bertone. A little over 400 examples were made through 1974, when Iso essentially shut its doors.

The 1965 Iso Grifo A3/C being offered through RM Sotheby’s on November 19.  Photo by Paolo Carlini, courtesy of RM Sotheby's.

The A3/C (Corsa) is far less known than its GT stablemate, and is a racer that saw brief success as a class champion at the 24 Hours of Le Mans in both 1964 and 1965. The engineering credit for both cars goes to Giotto Bizzarrini, best known for his final project at Ferrari, the 250 GTO, and his design for Lamborghini’s V-12 engine. His technical ingenuity was at its height when he developed the A3/C, for which he sourced the tried-and-true Chevrolet Corvette engine in an effort to exploit the performance, reliability and low cost of an American V-8, as a small company like Iso had no budget for the development and manufacture of its own power plant.

A quartet of tiny tail lamps is all that most competitors ever saw of the Iso.  Photo by Paolo Carlini, courtesy of RM Sotheby's.

About 22 examples of the A3/C were made before a rift between Bizzarrini and Iso’s owner Renzo Rivolta caused production to cease. Bizzarrini continued to build the model under his own name, along with a street version called the 5300 Stradale, ultimately producing about 100 examples. Unlike the A3/L Grifo, coachbuilt by Bertone, bodies for the A3/C were crafted by Piero Drogo’s Carrozzeria Sports Cars of Modena. Of course, as with so many works of art, fakes abound, so would-be buyers of any A3/C had better be on the lookout for bulletproof provenance. Which makes Lot 124 such a sizable prize.

Under the hood is the familiar sight of a 327 ci Chevrolet Corvette engine.  Photo by Paolo Carlini, courtesy of RM Sotheby's.

For the 1965 Iso Grifo A3/C on offer, the ownership trail from day one to present is documented, as it was first delivered to singer Johnny Hallyday, often called the French Elvis and the most famous rock star in French music history. Importantly, it is the eighth of 10 rare, riveted examples built in 1964, and one of just seven still extant.

Certain Italian cars of the era, like the original Lamborghini Countach and other exotic lightweights, sometimes used a rare and expensive metal called avional (duralumin), an alloy mix of aluminum, copper and magnesium that was light and flexible but nearly impossible to weld. Hence the rivets; the most expedient method of joining body panels. More than 1,700 rivets were needed to patch together the A3/C. Weighing less than 2,200 pounds, and with more than 400 hp, the A3/C is a quick car, and thanks to its front-mid-engine layout, it handles better than its many nose-heavy competitors of the day.

In a nod to practicality, the spartan interior features diamond-quilted vinyl—not leather.  Photo by Paolo Carlini, courtesy of RM Sotheby's.

Soon sold by its original buyer in 1966, the car remained in the long-term ownership of HSH Prince Pierre Sanguszko, then on to three subsequent owners until being acquired by the present seller in 2014. The car has been repainted in its original burgundy and benefits from a recent interior refresh. This jewel is estimated to fetch as much as $2.3 million, and is offered without reserve.