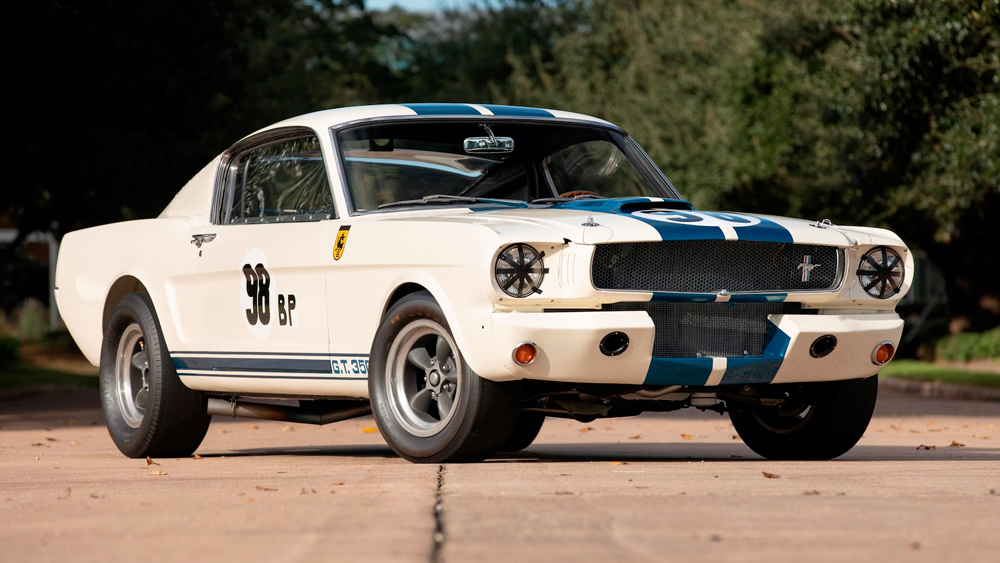 The story of how Carroll Shelby was enlisted to turn Ford’s quotidian Mustang into a race car has been hashed and rehashed, embellished with sprigs of editorial parsley and, ultimately, served on a silver platter ever since the first Ford Shelby GT350 rolled out of Shelby’s shop in Venice, California, circa January of 1965. It’s generally agreed that only 562 examples of the 1965 model-year cars were made, making it the most desirable of all Shelby Mustangs and a top-tier collectible.

But as I’ve alluded more than once, apropos of the denizens in George Orwell’s book Animal Farm, some cars are more “equal” than others. Among Shelbys, those would be examples of the 1965 GT350R model, of which 34 production cars were built specifically for racing, as designated by the “R” in their VIN. The rest of the cars have an “S”—for street—stamped into the tiny aluminum plate riveted onto the top of the driver’s-side inner fender.

One of two 1965 Shelby GT350R prototypes, 5R002 will be offered through Mecum Auctions on January 15.  Photo: Courtesy of Mecum Auctions.

To understand how one little letter can affect value by six figures or more is to grasp the sheer lunacy of our hobby. (Ask anyone deep into baseball cards if you want a more in-depth insight into the psyche that drives collectors to the brink.)

The only thing rarer in the model line than the 34 examples of the R production variant would be two prototypes; 5R001 and 5R002. One of them, 5R002, took more than 10 first-place finishes at the SCCA’s championship series in 1965—including the first win by a Shelby Mustang—adding indisputable allure, especially now that it will be crossing the block at the Mecum Auctions event in Kissimmee, Florida, on January 15.

“As one of the most decorated Mustangs in automotive history, this Shelby Mustang GT350R prototype upholds an important reputation for carmakers, engineers and fans alike,” says Aaron Shelby, grandson of Carroll Shelby. “Its innovative design, timeless aesthetic and history of high performance make this vehicle a marvel, shaping the future of car making and racing.”

This vehicle took more than 10 first-place finishes at the SCCA’s championship series in 1965.  Photo: Courtesy of Mecum Auctions.

The provenance of this car is enhanced by the many racing legends who drove it, foremost of whom was Ken Miles, who handily won the B Production races at Green Valley Raceway. Miles’s persona and legacy were dutifully acknowledged (but embellished as only Hollywood can) in the 2019 film Ford v Ferrari. The history of 5R002 is well documented, as any reader of Car and Driver in 1966 would likely remember, which featured the Shelby Mustang airborne on its cover, after which it was called the “Flying Mustang.”

Old race cars rarely die, they only occasionally get lost in the interim between their glory days and the present. Since its retirement from motorsport, this prototype has had a number of notable owners, between which it was essentially lost and later rediscovered in Mexico in 1989.

Following the discovery, it was prominently displayed at the Shelby American Museum in Boulder, Colorado, for 14 years. John Atzbach, a collector who acquired the vehicle in 2010, undertook a full restoration spanning four years, returning the car to its original specification from 1965. Subsequently, 5R002 has appeared at the 2015 Pebble Beach Concours d’Elegance, where it won Best in Class, and the 2016 North American International Auto Show.

They aren’t making them like Ol’ Shel’ anymore, and they certainly aren’t making cars like his 1965 GT350R. Shelby market watchers will recall that this car hammered at $3.5 million ($3.85 million including buyer’s commission) when it was auctioned by Mecum in July 2020, and remarkably, it’s on the ramp again looking for a new owner. Whether raising a paddle or looking through the window, collectors and enthusiasts alike will not want to miss this sale as new Shelby history continues to be made.