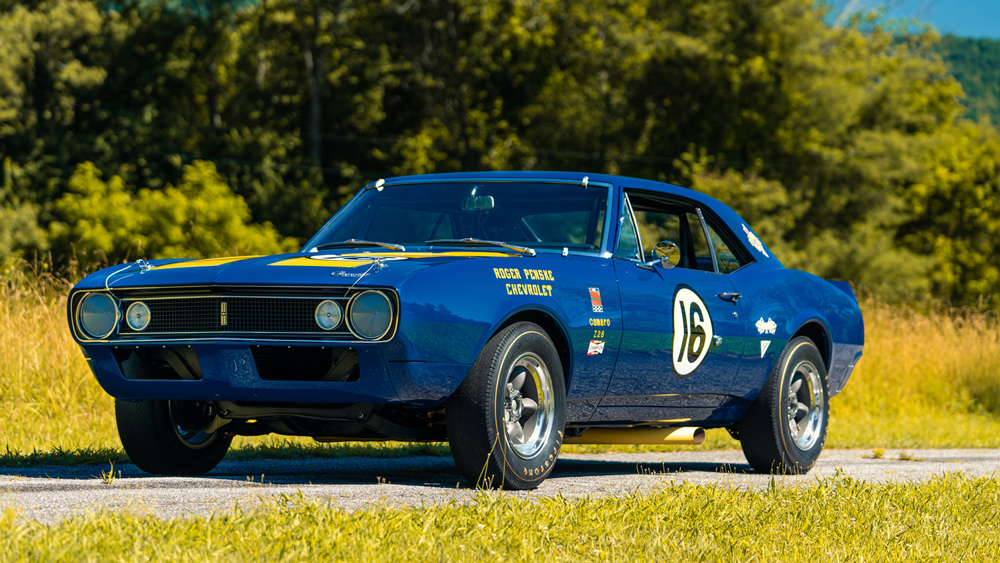 On August 13 and 14, Gooding & Company comes to Monterey Car Week as the official auction house of the Pebble Beach Concours d’Elegance, once again offering some choice rolling stock at its annual sale that coincides with the 70th anniversary of the world’s most esteemed concours. Highlights of the sale include a very special automobile that will doubtless attract the attention of collectors who value legendary race cars with looks to match their unimpeachable provenance.

Some of the most notable American competition cars took part in Trans-Am racing, which began in 1966 when Sports Car Club of America (SCCA) president John Bishop established the series as a manufacturer’s championship for modified sedans and coupés. Essentially modified production cars, the early Trans-Am Series featured two classes: the under 2.0-liter field, comprising European and, eventually, Japanese marques, and cars with displacement between 2.0- and 5.0 liters, which were primarily powered by small-block V-8s from the US. 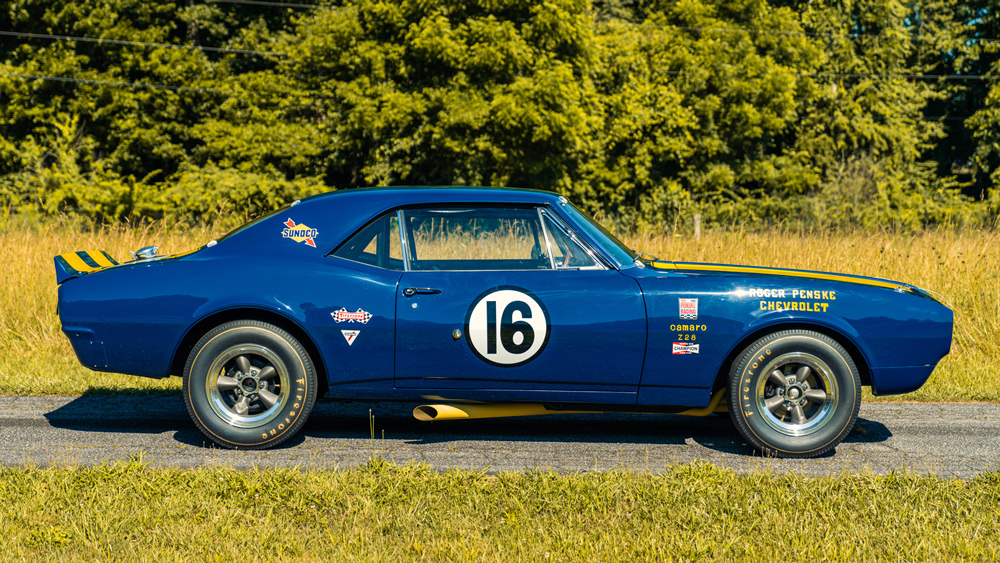 The timing was perfect, coinciding with the public’s infatuation with America’s pony cars, a new segment of smaller, sportier two-doors inspired by the introduction of Ford’s Mustang in late 1964. By 1967, in addition to the overwhelmingly popular Mustang, marques such as Chevrolet, Pontiac, Plymouth and Mercury had exciting new models in showrooms. And they all had names evoking power and speed, like Camaro, Firebird, Barracuda and Cougar. Soon, Dodge’s Challenger and AMC’s Javelin joined the party. Today, these remain some of the most desirable automobiles from the muscle-car era, a short period that flourished from 1967 through roughly 1972. Those handful of examples that competed in Trans-Am racing are at the very top of the collector-car pyramid. 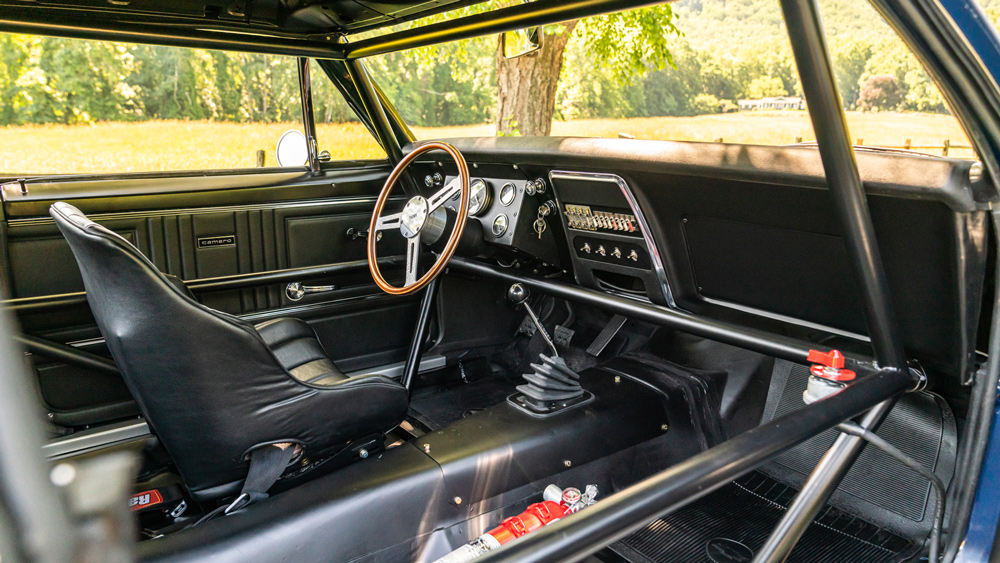 The race-focused cockpit of the 1967 Chevrolet Camaro Z/28 Trans Am crossing the block in Monterey.  Photo by Dynamic Photowerks LLC., courtesy of Gooding & Company.

In an almost frantic response by GM, the Chevrolet Camaro was released in 1967 to counter Ford’s market blitzkrieg with the Mustang. Chevy’s pony car was a success, and was quickly thrown into the Trans-Am series. “As the first Sunoco Camaro, this car is not only a successful racing machine, but the product of collaboration by three giants of the automotive industry: Chevrolet, Roger Penske and Mark Donohue,” states Gooding & Company Specialist Hans Wurl. “Its desirability and historical significance cannot be overstated.” 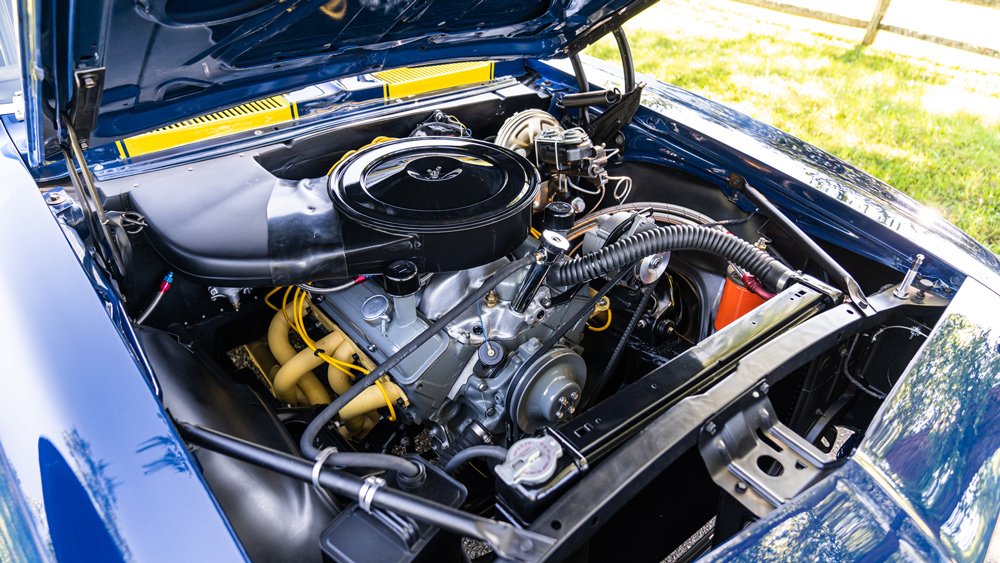 A small-block V-8 powers the Camaro Z/28 Trans Am on offer.  Photo by Dynamic Photowerks LLC., courtesy of Gooding & Company.

This 1967 Camaro Z/28 Trans Am is only the 14th example of the Z/28 model built, and it became the first Chevrolet Camaro to ever win a professional race. Throughout its extensive competition career, it was primarily driven by racing legend Mark Donohue. Penske Racing campaigned Camaro Z/28s through 1969, with Donohue behind the wheel and winning the series in 1968 and 1969. In 1967, Jerry Titus took the victory driving a Ford Mustang for Shelby American. Ford’s Mustang won again in 1970, with Parnelli Jones driving for Bud Moore Engineering. By 1971, Mark Donohue, once again driving for Penske Racing, won with the AMC Javelin. Other racing greats, including Dan Gurney, Sam Posey and Bob Tullius, competed in 5.0-liter cars. 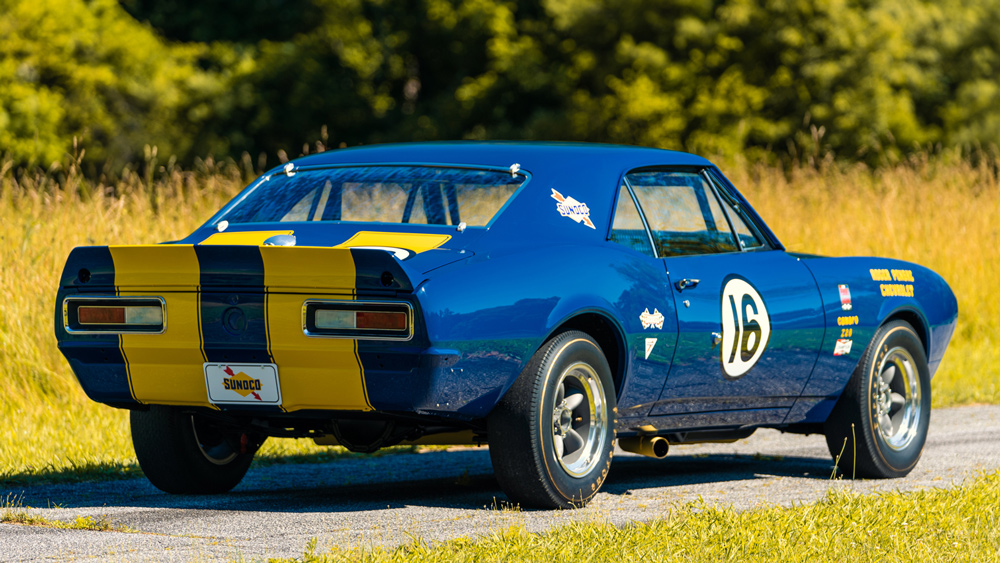 Penske Racing’s famed driver Mark Donohue was the one who primarily campaigned this car.  Photo by Dynamic Photowerks LLC., courtesy of Gooding & Company.

Estimated to fetch between $1.4 million and $2 million, and with an illustrious competition history, chassis No. 7N163378 has been fastidiously restored by notable Chevrolet expert Kevin Mackay to the specification of its first victory. Acquiring one of the most significant Chevrolet racing cars ever produced is an opportunity rarely afforded collectors, and for those Robb Report readers who remember Bitchin’ Camaro from The Dead Milkmen’s 1985 debut album Big Lizard in My Backyard, this Z/28 has got to be the coolest Camaro of them all.