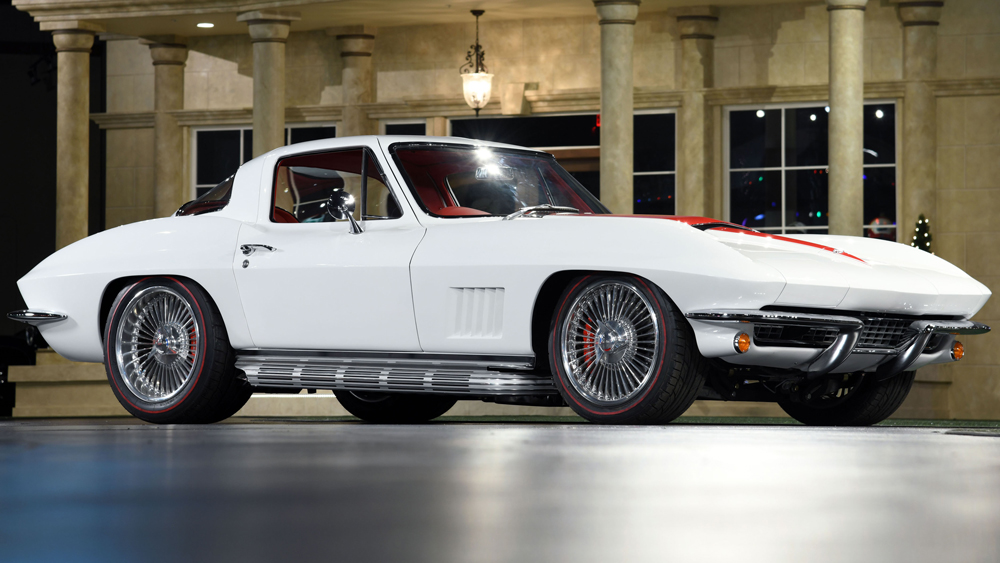 Auction house Barrett-Jackson sets another grand stage for its upcoming sale in Palm Beach, Fla., from April 7 through 9. Some of the star cars on offer are from collector-philanthropist John Staluppi’s Cars of Dreams Museum, an assemblage comprising a diverse assortment of vehicles that includes 1930s hot rods, 1950s- and ’60s-era classics, and contemporary performance cars. Notable are some of Staluppi’s unique restomods, a white-hot category that has recently seen much interest and activity from within car-collector ranks.

It’s hard to imagine a better combination of old car and new drivetrain—in other words, a restomod—than one based on the Chevrolet Corvette Stingray. The classic shark-inspired shape, penned by Larry Shinoda and made from 1963 until 1967, is arguably the most groundbreaking US design of the 1960s, and is known among enthusiasts as the C2 series of the model. It’s a shape that even Euro-centric car aficionados have to admit evokes as much emotion as any exotic hot rod from Italy or England. It was certainly more powerful than its finicky competition, especially when fitted with the optional big-block 396 ci V-8 engine in the latter half of 1965, and the even bigger 427 ci V-8 from 1966 and ‘67.

The 1967 Corvette restomod being offered at the Barrett-Jackson Palm Beach auction, which runs from April 7 through 9.  Photo: Courtesy of Barrett-Jackson.

“The 1967 Corvette is considered by many to be one of the most iconic cars in history,” says Craig Jackson, chairman and CEO of Barrett-Jackson. “John Staluppi’s restomod version of this famous sports car equals the custom vehicles built by the great prewar European craftsman.” Jackson goes on to tout the “heritage styling of a car with spectacular fit and finish” and adds that “the best aspect of this sports car is the modern engineering under the vintage body.” That engineering includes “a fuel-injected V-8, contemporary brakes and modern suspension.”

The example is the result of a two-year restoration and modification process.  Photo: Courtesy of Barrett-Jackson.

The result of a two-year effort and showing only test miles, this resto-Vette is painted PPG Classic White with a red Stinger hood—the same hood that distinguished the big-block C2 series from its 327 ci-powered little brothers. But lift the hood and all similarities with its bygone predecessor evaporate like high-octane racing fuel at Willow Springs in August.

The old 427 ci power plant, with its lumpy orange valve covers, is replaced by a normally aspirated Chevrolet LS6 5.7-liter V-8, featuring twin throttle bodies and an air cleaner that mimics the original from 1967. Braided stainless-steel plug wires complement chromed, big-block-style valve covers on the contemporary small-block V-8. The engine bay is finished in smooth-satin Charcoal Metallic paint, looking infinitely more refined than what the owner of a Corvette would have seen 60 years ago.

The old 427 ci power plant has been replaced by a normally aspirated Chevrolet LS6 5.7-liter V-8.  Photo: Courtesy of Barrett-Jackson.

A stock, period-correct C2 looks purposeful, but this custom Corvette looks positively mean. Thick side-mount exhausts, running under each door, terminate before the widened rear fenders and tubs, which tuck 12-inch-wide wheels up and under the fender wells. The knock-off Curtis Speed rims recall the C2’s original turbine design, while fat red-line tires add a nostalgic flair. And the lowered front end enhances the menacing stance. Under it all is a powder-coated Coffman chassis with a C6 Corvette suspension and Wilwood brakes at each corner.

The interior is fully custom trimmed in lipstick-red leather, though those familiar with the original C2 will immediately feel at home with Corvette’s inimitable twin-hump dash. Few color combinations look better than a white-over-red Vette, and here, contemporary seats replace the austere flat, folding buckets of yore.

The interior is fully custom trimmed in lipstick-red leather.  Photo: Courtesy of Barrett-Jackson.

Modern touches include a Bluetooth sound system, Vintage Air climate control with Mercedes-Benz vents, custom door panels, a center console with billet window switches, polished luggage runners on the rear package shelf and an integrated wireless phone charger in the dash. All that good LS6 V-8 power is delivered to the wide rear wheels through a Tremec T56 six-speed manual transmission. After all, some things, like winding out a big-block V-8 and shifting into a higher gear, just never get old.